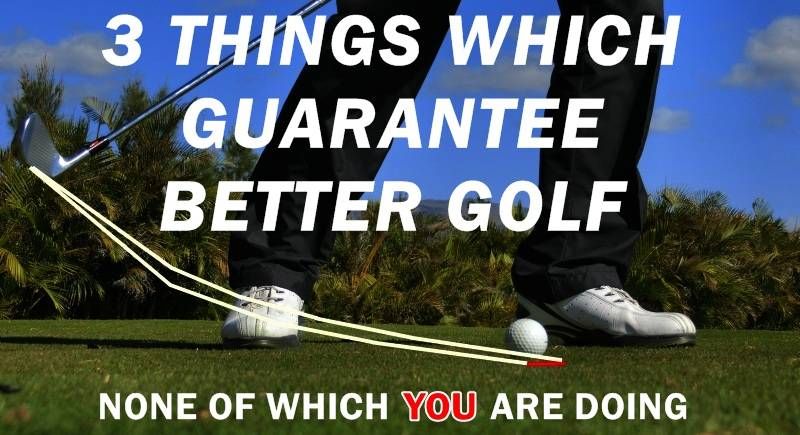 Golf can be confusing; 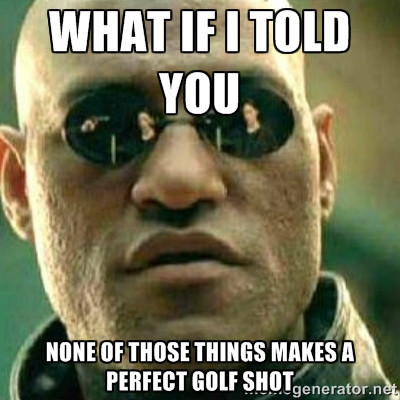 While some of the advice may pertain to you and your individual swing, I can categorically say that doing all of the above will not guarantee a good shot – guaranteed. Don’t believe me? Take a look at the top pros with what you would consider a great swing – one they may have worked years and tens of thousands of hours to master and ‘perfect’.

Do they ever hit a bad shot? Hell yes! The average pro only hits around 60% of fairways and greens – they make plenty of bad shots. 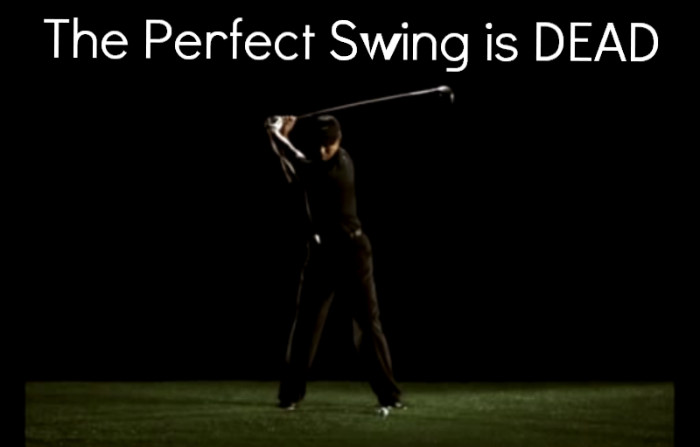 When Tiger Woods shot this video for “The Perfect Swing”, he averaged around 55% of fairways hit.

So, what causes a good shot then?

Most golfers are lost – hardly anyone knows what actually causes a good shot. 99% of people on my lesson tee have not got the faintest idea what has created their good shot or poor shots, often linking up irrelevant and incorrect things.

For example, a player will often say “I lifted my head on that one” after a topped shot. I can tell you now, that is not the cause of a topped shot; you may feel that it was, but it wasn’t. 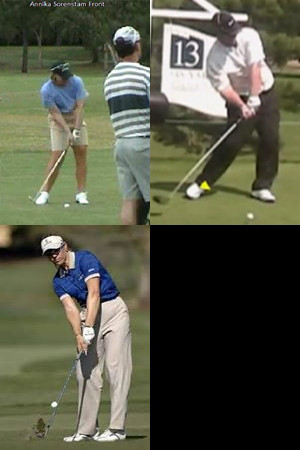 While many factors create a great golf shot, these three things (if you improve them) will guarantee better golf.

Okay, okay. What are they?

1 – Contacting the ground in the right place 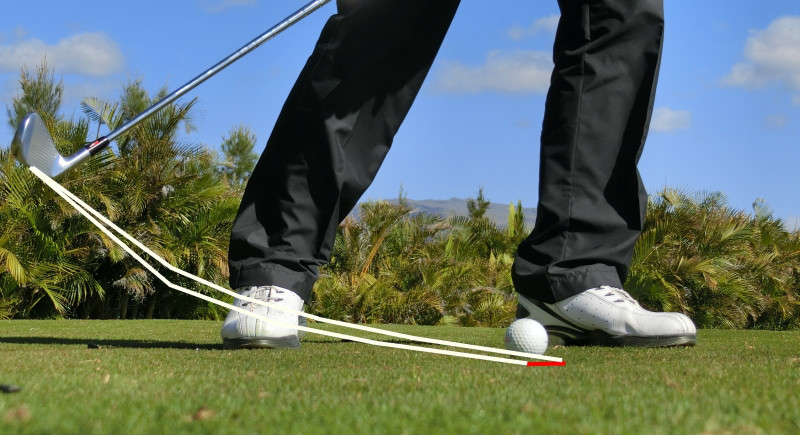 You will be a strike God. 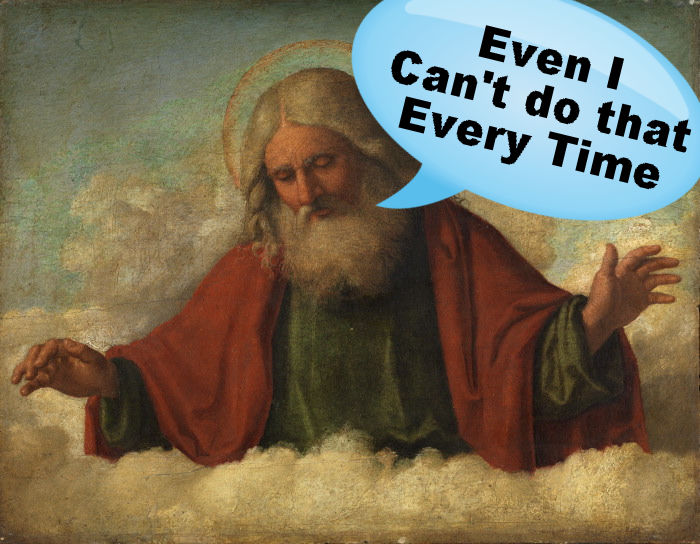 Even though you will never actually master this skill, all pro’s do this on their best shots – Less than 2% (guess based on my experience teaching amateurs) of amateurs do this regularly enough – And the ones who do are close to scratch. I regularly see players who are hitting the ground as far as 4-6 inches behind the golf ball and are completely oblivious to the fact.

While you might be chuckling and saying to yourself

Yes, but there is no way I am hitting the ground THAT far behind the ball

keep chuckling my friend. But if your handicap is more than 5, I would put a lot of money on the fact that you are poor at this skill.

Everyone knows this (mostly). The issue is, most people take for granted they are doing it (trust me, it is very unlikely you are doing it and highly likely that you are much further off the mark than you think), and most people haven’t got a clue what has happened when they don’t do it.

While pros strike the sweet spot more often, I regularly see amateurs as low as 10 handicap with tight patterns which are way off the mark (right pic). Modern day clubs are so forgiving that people never pick up on it – until it’s too late.

I regularly get pupils who are not even hitting the grooved part of the face, as I showed in my STUDY.

Most people go their entire golf careers hitting the same (crappy) part of the face over and over again – losing 30-40 yards and causing erratic direction control. And all because they don’t know what they are doing. Within 10 balls, I can show them, we can improve it, and they get set on the path to better golf.

Are you doing this? No.

Wanna bet against me?

There are many concepts, drills and techniques in The Strike Plan which will improve your face strike.

I use the term ‘controlling’ lightly, as it is less a manipulating process, and more a case of getting the face to look in a functional place at the right time. 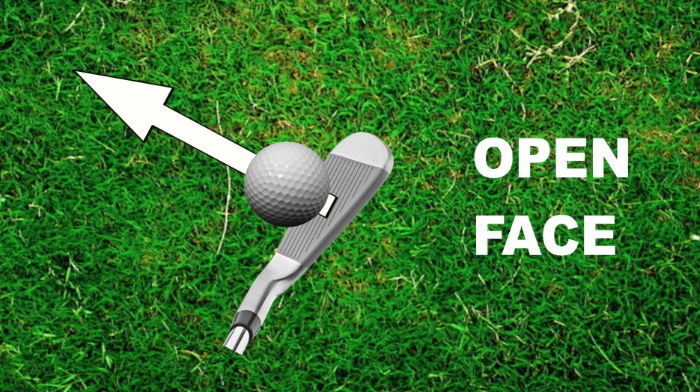 An open face like this will start the ball right.

As incredibly difficult as it is to do this (so difficult that the top pros can only do it 60% of the time on average), everyone can improve their ability to do this.

While overall shot-direction is a combination of both swing path (direction the clubhead is travelling at impact) and clubface, clubface accounts for over 70% of the starting direction of the ball. Also, the difference between YOUR offline shots and the ones which are on-target has often been a result of a clubface variance.

Most people feel like their occasional offline shots have been caused by a changing swing path – but I rarely see this happen (less than one in 100).

How do I get better at them?

Just knowing they exist and are massive determinants of your shot success is a big start – most golfers haven’t a clue why their shot just bobbled along the ground, or why it just flew 90 degrees to the right. Most golfers are searching for that magical elusive secret to great golf, trying different methods in the hope of finding one which will indirectly improve these factors.

In The Strike Plan, we look at the ground contact and face contact variables. I show you how to improve them from a skill perspective, as well a through improvements in technique and conceptual understanding. You will find out how the pros strike the ball so crisp and consistent, and also learn how ‘common wisdom’ is causing you to hit more fats and thins than you would like.

Check out The Strike Plan for more details (click below).

While golf is insanely difficult, wouldn’t it be nice if you could simplify it to a few simple things and work on them, with an understanding that if you improve them you will GUARANTEE better golf?

The three things are;

Rather than listen to one magazine article telling you one thing one week and the next week telling you the complete opposite, wouldn’t it be nice to put your valuable time into practicing things which directly relate to your good and bad shots?