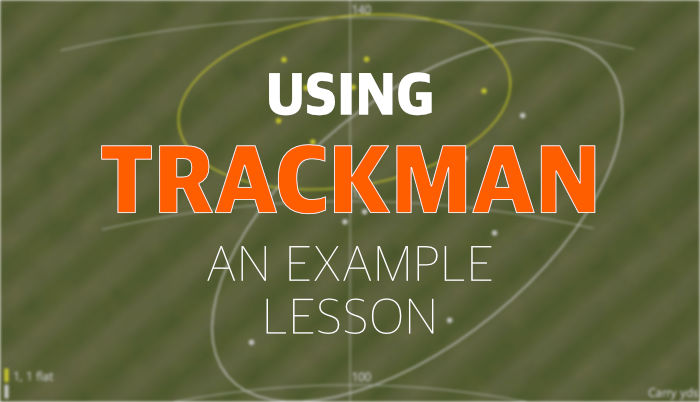 Lots of players and coaches these days are frightened of technology. I can definitely understand the fear – information overload can be a daunting thing which can hurt players for sure (paralysis by analysis). However, I think too many people associate technology with complexity.

I personally use technology

Let’s take a look at an example

A pupil of mine came to me recently complaining of the ball finishing right and flying low. He also was strapped up on his forearms, and said he has recently developed golfers elbow and Tennis elbow.

I watched him hit a few shots while trackman was running. I could see the issue straight away, but had the numbers to confirm my suspicions. The numbers are with a 7 iron.

As we can see from the table, the club path was left (4 degrees), resulting in a fade shot (which often over-faded). From my understanding of the swing arc, I knew that;

I also knew we could reverse all of these pretty quickly by changing the swing direction. Below are the new numbers after this swing direction change was achieved.

The numbers in the shaded row are before, the number in the white row (tagged 1,1 flat – don’t ask why) are after. So, we see that…..

This is demonstrated below (white = old, yellow = new). 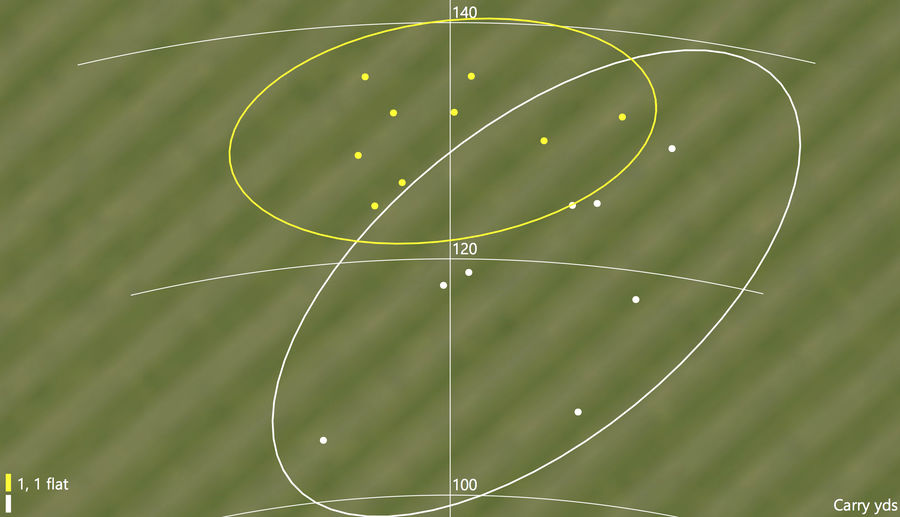 The nice part about all of this is, although we made a lot of positive changes, I only asked him one thing.

can you feel like you pick the ball off the grass while you are brushing it in this (slightly right of target) direction.

I sprayed a line on the ground to signify which direction I wanted his club to move through impact. I knew that trying to swing on the line I asked him to would change swing direction, face to path and low point position (it would move it back). The issue was, by moving low point farther back, he may have a tendency to fat the ball. So, by asking him to feel as if he is picking the ball instead, this would raise his swing arc and move the point of contact with the ground further forwards (seen below). 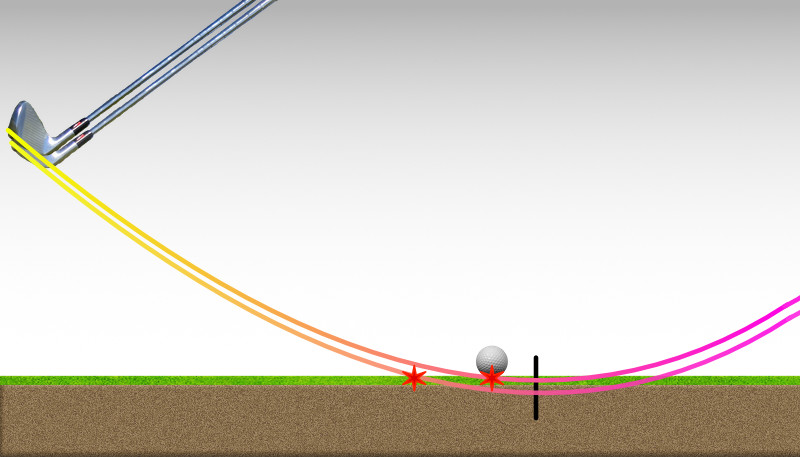 Raising the swing arc from the bottom line to the higher up line also moves ground contact point forwards.

Something that might have been hard to do (convincing someone that they are doing the opposite of what they think) was incredibly easy with tech. It helped bridge the gap between feel and real.

Also, for me, seeing that his Angle of attack was so steep allowed me to make the decision to change swing direction and know that all the pieces would come together. If his angle of attack was 0, I may have gone a different route.

Having the results in such a nice format at the end so they can clearly see it was also very motivating for the student. Seeing the tighter dispersion showed that the change had been effective.

If you want to learn more about creating better contact (understanding low point) as well as training methods for making this your best golfing year ever, check out my video series, The Strike Plan, by clicking the link below.