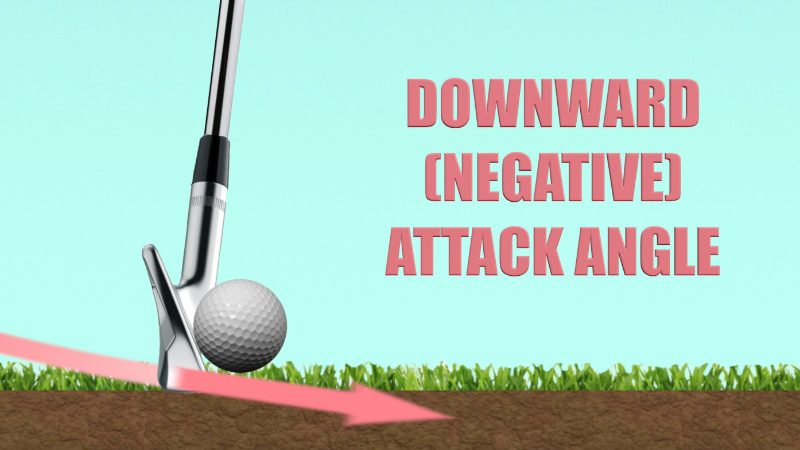 What Is Angle Of Attack?

Angle of attack refers to the angle the club approaches the ball – especially through the impact zone. While this is a singular 3D value, we often split it into horizontal angle of attack (or swing path) and a vertical component, which we call angle of attack.

Below is a 2D representation of a steep angle of attack

We even have positive, or upward angle of attacks. These can be beneficial with a driver. 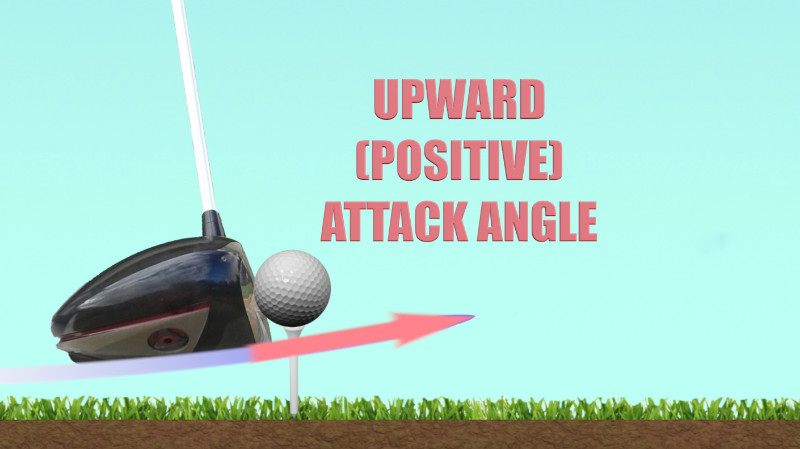 And obviously we can have a neutral AOA which is neither down nor up.

Shaft/Swing Plane Is Not Angle Of Attack

Many people take a snapshot of their swing and see the clubshaft in a certain position and think that it indicates a certain angle of attack. For example 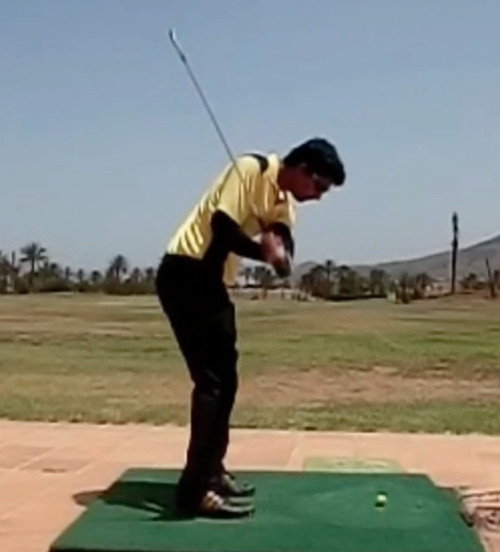 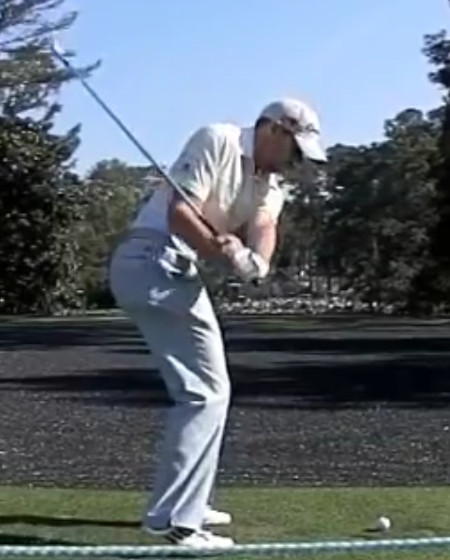 And most people also assume that this player will produce a shallow angle of attack.

However, the reality is that the players shown could produce the complete opposite of what you would imagine. I’m not sure what Garcia’s AOA is, but I know that the example of the player with the steep shaft had a pretty normal AOA number.

Even if we were to trace the movement the clubhead makes from hip high to hip high (the swing is relatively planar here – hence the name “Functional swing plane”), a steeper plane does not mean a steeper angle of attack (and vice versa). 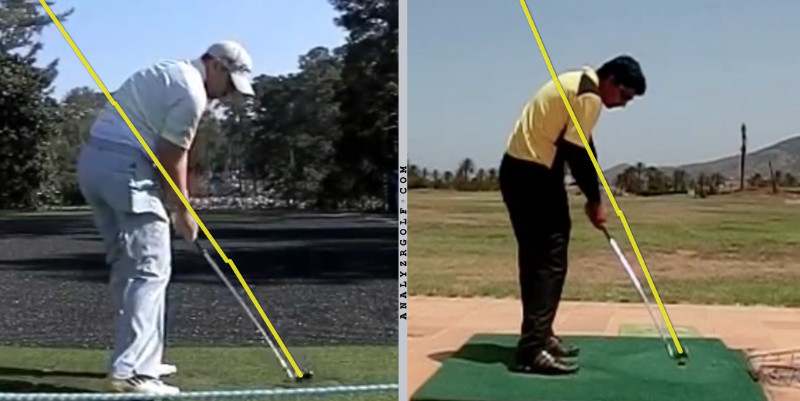 Plane is not angle of attack.

Swing Direction/Path Is Not Angle Of Attack

Following from this, lots of golfers think that because they have an out-to-in swing that they are automatically swinging too steep on the ball. While swinging left certainly does correlate with a steeper angle of attack, there are several other variables at play. I see just as many people swing left and be too shallow as I see players swing right and be too steep.

Changing swing direction often does change angle of attack in a way you would imagine – swinging more left will often make the angle of attack steeper and vice versa. However, we should caution against assuming that a slicer is too steep, or that a drawer is too shallow.

Divot Depth Is Not Angle Of Attack

I have seen a lot of amateurs bury the club a foot behind the ball, creating a trench big enough to hide in from the embarrassment. Often, this shot is met with the comment of

I got too steep on that one”

While this could be true, burying the club a foot behind the ball is usually more of a problem of swing arc height control (a concept I discuss in The Strike Plan) than it is steepness. Or, you could say, it’s not a steepness problem it’s a deepness problem. 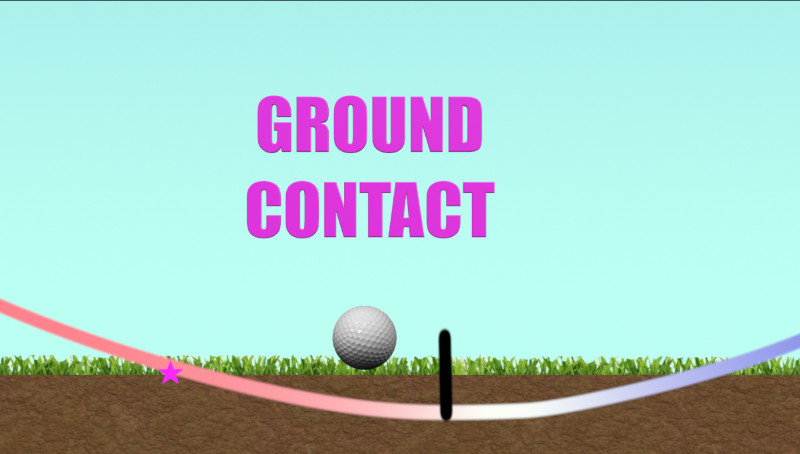 Here we see the low point not too far in front of the ball (hence the angle of attack is not very steep). However, due to the depth of the swing arc, contact with the ground is early.

I even see situations where a player has come in so shallow that their club is moving upwards at impact due to a low point which is behind the ball. The player then hits the ground early and thinks they came in too steep, whereas in fact the club was moving upwards. 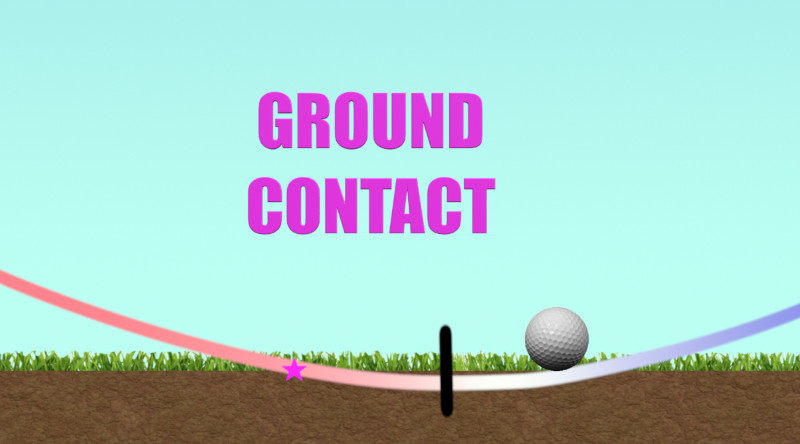 This fat shot was caused by a low point which is behind the ball – which is a POSITIVE angle of attack. Lots of people mistake this for being steep, as they incorrectly link fat=steep.

Also, it is possible to come into impact relatively shallow, but produce a big divot because the club continues on that shallow trajectory for longer – a wide arc at the bottom. 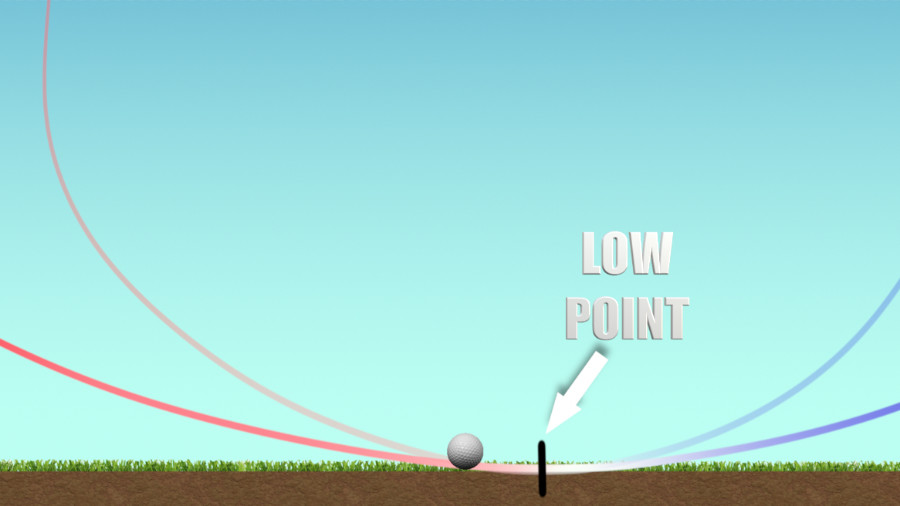 In the above picture, we see two different swing shapes (transparent and opaque). While the low point and divot depth are the same, the angle of attack may be different.

This can have several advantages – I explain how to achieve this in The Strike Plan in the shallowing module.

The biggest influences on angle of attack are the swing radius, the swing plane and the low point position.

Probably the biggest single factor on angle of attack is the position of the low point relative to the golf ball. (low-point = the lowest point of the swing arc).

For example, if the low point matches the golf ball, we will have a neutral angle of attack. 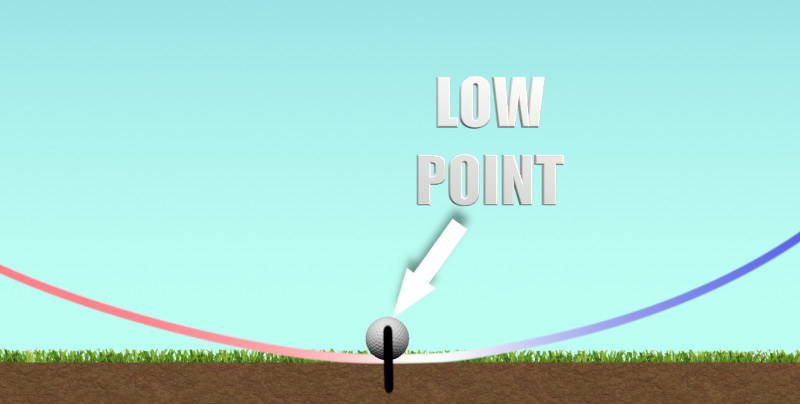 If the low point gets further in front of the golf ball, we start to get more of a negative angle of attack 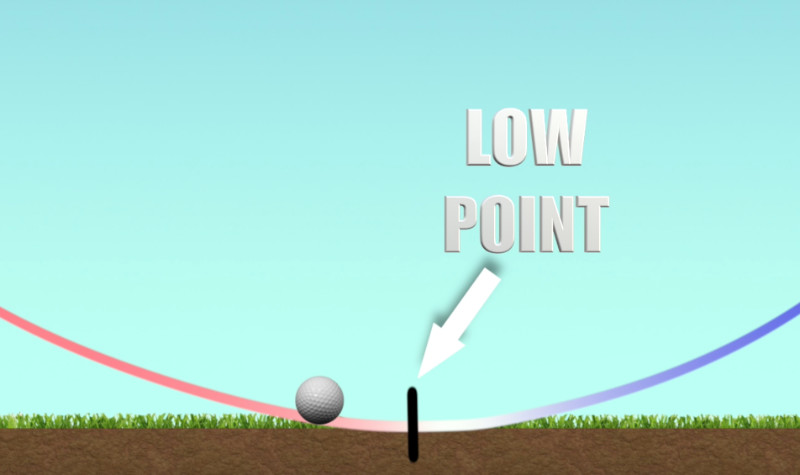 And if the low point is behind the ball, we get a positive angle of attack

While I said earlier that swing plane does not equal angle of attack (and I stand by it), it still influences it. It combines with low point position to produce angle of attack. While it can get very complicated, a good general rule is;

The steeper the swing plane is through impact, the more angle of attack will vary if you move low point”

For example, in my teaching, I know that moving the low point forwards (with a Driver) by 1 inch will tend to make AOA 1 degree steeper. It’s about a 1:1 ratio.

However, with a 6 iron, as the vertical swing plane is steeper, moving the low point position forwards by an inch will tend to make the angle of attack 1.5 degrees steeper. It’s a 1:1.5 ratio.

Swing radius is defined by where the center of curvature of the clubhead is through impact.

It is important to note that we are only talking about the moments directly around the golf ball. Lots of people interpret a wide swing arc as one where the entire golf swing has width to it – which is not always true. In fact, this picture is exaggerated to highlight the concept.

Again, a complicated topic if you go into the nuances of it.

Luckily, there is an easier rule to remember – the wider the swing arc, the shallower an angle of attack will be (for any given low point position).

I understand that lots of this article will be information that is intellectually pleasing but perhaps a bit overboard for the average golfer. But I also understand that people who read my blog are often simply interested in such information.

However, if you take the time to digest this article, there are definitely bits which can be applicable to your own game – I certainly use this information when teaching (even if I don’t explicitly say it). To summarize the most practical parts of the article.

If you want to learn more about how to change/improve your low point position/arc width etc in order to strike the ball better than ever before, click below to check out The Strike Plan.