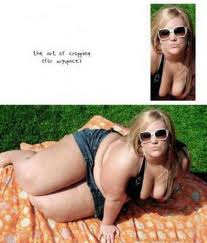 Which swing is better?

Swing 1
Or swing 2
Please Ignore the clothing.
Most of you looking at the swings would say, not contest – Swing number 2. The takeaway is better, the hands move away in synch with the body, the shaft plane halfway back is great, the top position is neutral in terms of clubface and shaft position, it stops at parallel (no overswing) and the foot stays on the ground longer through the downswing and impact.
Swing 1, on the other hand, has a real ugly outside takeaway, where the arms separate from my body early. This causes the clubshaft to look steep early on, before flattening out into a long, over-swung, laid off position at the top. On the downswing, I fire my hips aggressively and my right foot comes off the floor quickly.
I would bet that almost everyone, even the most trained of eyes, would pick swing 2 as the better swing. But actually, the better swing is number 1 – the one that looks the funkiest. Why? it  is the one that gives repeatedly and more consistently the best performance for me.

Looks can be Deceiving

Ah the art of cropping
The problem with swing 2 is that although it looks better, even after 3 years of ingraining it and hitting hundreds of thousands of balls with it (it’s my job), it never worked. In fact, the more pieces came together , at best I stagnated, at worst I went backwards and felt like I had no control of the golf ball. I believe that the things I worked on were the right things at the time, and although anyone can produce an opinion that maybe a slicefixer release, or a stack and tilt swing, or a golfing machine model would have worked for sure, you are missing the point. Fact is, no one in their right mind would take swing 1 over swing 2, but I did and I will never look back.

Adam, How could you let your swing get worse?

Technically it’s not worse, as the function is better; it just looks worse. Swing number 1, the funky one, happened as a result of having enough of technique. I was videoing my swing every day, trying to get all the pieces and positions perfect. After 3 years of working really hard on it, I got the swing to look pretty good. However, I was on the verge of quitting golf because my results were getting worse. So I did – I took a ‘break’ from golf during my years at university, maybe playing one or two rounds a year with friends.
When I came back, I had a new philosophy. I remember seeing a high speed video of a club and a ball through impact during one of my university lectures. It sparked in my mind – surely the ball doesn’t know how you swing it? Surely, all it knows are the physical factors affecting it at impact? So when I came back to practicing, I took this philosophy to the extreme, threw out my video camera and purely worked on getting my impact factors correct described in THIS ARTICLE.
The ball only knows this point in time
I worked hard on getting the club path more neutral through impact, and working on tinkering with the clubface through impact until I found control of the flight. I completely disregarded all swing and movement theory, and focused on club and ball contact, and ball flight. I also spent a lot more time messing around with left handed shots, cack handed swings, hammer throw swings, hooking on purpose, slicing on purpose, hitting flop shots with 4 irons etc.
The result was a worse looking swing in terms of movement technique, and even on the trackman the stats were not significantly better. But I started hitting 80% greens and 85% fairways. Last year, I only played 5 rounds but averaged 2 under par (my mid range putting sucks by the way), with a few practice rounds of 6 under after 9 and 6 under after 12 holes (with a 3 putt). So even though it looks less consistent, less controlled, and theoretically worse, there is much more going on here.

What you see on video is really just the tip of the iceberg in
terms of what is going on internally, both physically and mentally.
And it all counts
Many reading this article will say that I am obviously against working on your swing. Of course I am not; it served me well for the first part of my learning for sure. But there is a line you can cross when working on your swing. You can search for the perfect swing so much that you actually stop playing golf and start sabotaging yourself. I always say, the search for perfection is the greatest creator and destroyer in golf.

Some people can get a little too, ahem, mechanical
I suppose the lessons I learned here are many – and I am trying to pass them on. The lesson is NOT that better technique equals worse performance, although this was the case for me. The lessons are;

Eamonn Darcy was pretty good, even with this technique
I hope this article sparks something in you. I think, luckily, the world of instruction is starting to see the myth of technique being the holy grail, and more and more better instructors are emerging who allow more freedom within technique. My aim really is to chip away at the myth of technique as the be all end all. It is a supplement to improvement. But just like health supplements, take the wrong ones for your body chemistry, or take it in the wrong dosage and you can do some serious harm. Never take a supplement and you may be missing out one something too.
Can I swing like number 2 – in a heartbeat. Will I want to? Never, I actually enjoy the fact that my swing has a little character to it.

To re-iterate the take home lesson once more – it is not that working on your movement technique is a bad thing, it’s just to understand the limits of it. There is no perfect swing, and good golf is a multitude of factors far beyond what we see on a camera. Keep working on better technique, by all means, but be aware that you come across the law of diminishing returns at some point. I hope this article has at least made you think 🙂