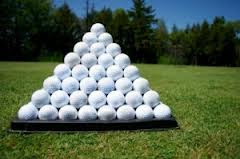 May 20, 2013 1:49 pm Byadmin InUncategorized
5
Whilst this
article could fill a dissertation (and I am not known for my bite sized articles),
I will try to keep this briefer than it should be.
There are
two main types of practice you can perform. One is called ‘block’ practice and
the other is called ‘random’ practice. They both can be beneficial, depending
on what you are trying to achieve.

This is
probably the most common form of practice you see. Go to your local range and
you will see hoards of people beating balls, shot after shot with the same club
to the same target. Whilst I wouldn’t normally consider this ‘quality practice’
as such, it can serve us a purpose. Although, I would almost put that in the category of ‘non-practice’, or a warm up, as you are not being conscious or present through the process. We are essentially helping our body and brain to create a more consistent technique, although it may not be consistently what you want (for example, that consistent 40 yard slice).True Block practice is repeating the same skill over and
over; whether that is trying to ingrain your current swing, or making changes to it through heightened awareness and intention. The act of repeating something makes physical
changes; our brains start to wire new neurons together (in a new movement pattern), those neurons then start to wire together more solidly, and they
get wrapped in an insulating substance called myelin – which makes it more and
more likely to happen. Repeating something makes it more likely to be repeated. Our bodies become more flexible for that specific movement,
and specific strength changes occur in the muscles in order for that movement
to become more dominant and easier to perform – this is why it is so difficult
to change our swings after we have had them so many years, but this idea can be to our advantage when we are trying to ingrain a new, better technique.

A block practicer can hit this pyramid in 3 minutes 🙂
Coaches tend to call these guys ‘machine gunners’ or ‘bad players’
although, block practice doesn’t have to be a waste of time.
Block practice
tends to be useful for the beginning stages of learning something new – when we
are in need of creating the movement pattern. We can get lots of feedback in a
short period of time (5 balls a minute or more). We can also make adjustments
on the spot, leading to an immediate calibration style of learning. It can also
be good for confidence boosts, as we are able to quickly improve our
performance during the session – however, this comes at the expense of raising
our expectation level too high, which is usually bad. Block practice is also great for building up new mental concepts for how to hit the ball, as well as mental concepts in general.
But there
is a disadvantage to block practice. It tends to neglect the preparation and
access of the movement. For this reason, and the above reasons, we tend to see
a performance which raises very quickly during the session, but then drops down
close to baseline again after the resting period. In other words, we feel like
we are learning a lot during the session, but the next day most of it is gone. We do retain some of the information, but retention of skill tends to be lower. 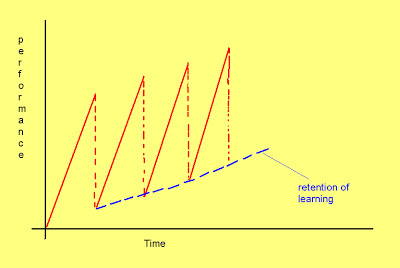 With this graph, you can see the typical performance of a block practicer.
The solid red line represents the great performance improvement during the practice session
The broken red line shows what happened when they stop – a dramatic loss of performance
The broken blue line represents the actual retention of learning
It is also a great tool to push our skill levels into new areas which we have not seen before. Whether or not we retain all of this ‘newly acquired skill’ is irrelevant – it has opened up new belief patterns and neural pathways for us to access.

Random
practice is not practicing at 4am with a balloon attached to your hat. It is
simply practicing by changing the shot every time. For a beginner, this could
be as simple as using the same club but changing targets. For a better player,
this could be changing club, target and shot shape whilst going through a full
on-course routine before each hit.

Random practice means using different clubs and hitting different shots, just not all
at the same time
Most
players avoid this type of practice because it requires more discipline,
pre-shot preparation and it is a massive amount more difficult than block
practice. But, you should be practicing this way more often exactly BECAUSE of
those reasons. The fact that it is more difficult just makes you learn quicker.
But it has the added benefit of automatically lowering your expectation levels. It is also much more course realistic (how often do
you stand on the course and hit 30 7 irons in a row?), so the chance of your
newly found skills transferring to the course is much greater.
Also, random
practice is about preparation. It’s about developing the brain’s ability to
recall the motor pattern. Think of it like a file on a computer.
Block practice may have created the file, but random practice is going to allow
you to find the file quicker. The more you perform random practice, the quicker
and more efficient you become at being able to find that file/motor program. For
this reason, people who practice in a random fashion tend to see their performance
level stay low during the session(due to its difficulty level), but the next
day they find an improvement in performance. Like so; 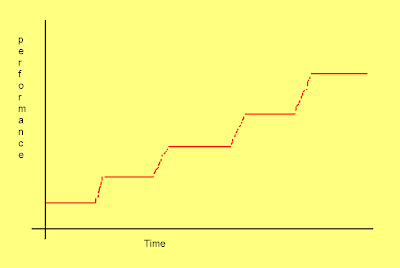 In this graph, we see the solid red line representing the lack of improvement
during the session. But during the rest period, the player goes through
more Delayed Learning  and comes off better at the end of
several sessions

Take home notes for golf – and other things you are learning

So which do
you want to be – the Block practicer who gets great results during the session
but can’t hit it on the course and loses the things they learned the very next
day? Or the Random practicer, who may not hit it great on the range, but they
perform better on the course and their learning over time improves more
rapidly? I think it’s a no-brainer really.Block Practice advantages
Block Practice disadvantages
Random Practice Advantages
Random Practice Disadvantages
As an important note –
both methods of practice can be beneficial, but I tend to promote random
practice more, simply because of the fact that everyone already practices block
practice. As a rule of thumb, if you are practicing something NEW, do block
practice – but make sure you are mentally ‘present’ and you are practicing with intention. But once you can perform that move/skill relatively well (say 5/10)
it is probably time to move on to random practice.Please, feel free to share this article (click the little buttons below) if you enjoyed it. The more views I get, the more content I will create. You can add me on facebook also – search for adamyounggolfcoaching  to keep up with the latest updates.