3 Keys To Bomb The Golf Ball 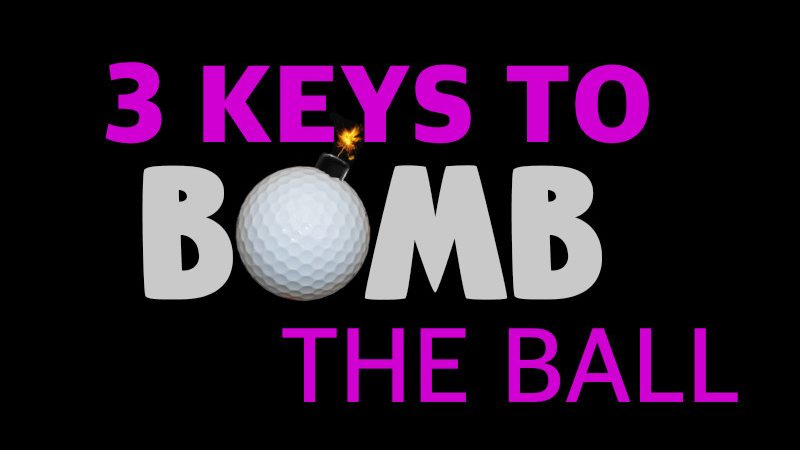 3 Keys To Bomb The Golf Ball

When I was growing up and teaching myself golf, I was completely confused as to what caused a golf ball to go a long way.

I watched the pro golfers produce seemingly effortless swings and fly the ball huge distances, and I desperately wanted to know what magical thing they were doing to create this feat. I tried copying their backswings and positions, but nothing made me hit the ball further.

Now, it’s not a secret to me. I know what creates maximum distance – it’s simple physics. And while I currently take this knowledge for granted, I know that there are many golfers out there who are searching for the keys to distance. I see so many golfers trying to increase distance in ways that don’t work, or are even counterproductive to distance increases.

So, in this article, I will highlight the elements that create long bombs. To most amateurs, these things are secrets, because they are not often talked about.

The quicker the ball is moving, the farther the ball will go (all else being equal).

The major contributing factor to ball speed is clubhead speed. Players who swing the clubhead quickly tend to be able to transfer more energy into the ball – a reason why tour pro’s typically swing around 115mph (amateurs closer to 90mph).

But that’s not all – it’s pointless swinging 115mph if you miss the ball, right? That’s where smash factor comes in.

In brief, smash factor is the energy transference from clubhead to ball. If you swing the club at 100mph and the ball comes off at 150mph, that is considered a 1.5 smash (and a pretty perfect strike). The things which contribute to smash factor are

Basically, if you are swinging the clubhead quickly and you are transferring that energy into the ball, you will get a high ball speed. While we can certainly increase our swing speed, probably the most efficient way to pick up instant yards is by improving smash factor via strike quality. In The Strike Plan, this is addressed in detail.

A ball going 180mph is no good if it is launched at knee height. So how high should we launch it? While there is a law of diminishing returns, in general, amateurs can’t launch the ball high enough.

According to the Flightscope trajectory optimizer, a player with a ball speed of 135mph (pretty typical for an average male with a perfect strike) would need to launch the ball at 18 degrees to achieve maximum distance, with 23 degrees being optimal for carry distance (important for getting over bunkers and lakes).

To put that into perspective, most players play with a 10-12 degree driver, and the ball typically launches lower than the loft on the club (due to friction and angle of attack etc). 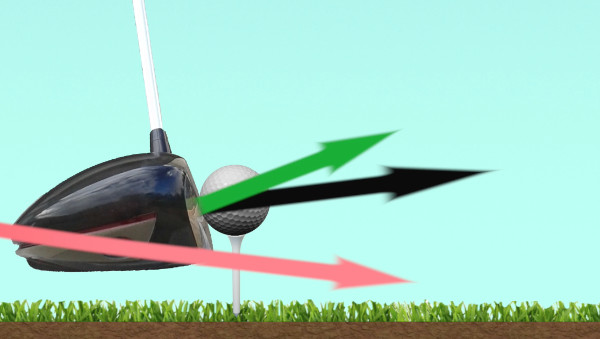 A lot of players have a high divergence between angle of attack (red) and dynamic loft (green), while still producing a low launch (black).

What is the best way to increase launch angle?

In The Strike Plan, I show you how to do these things with techniques and skill drills (as well as through a better conceptual understanding).

With the last point being launching the ball higher, most people might be asking why we don’t simply increase the loft of the club?  While this can be a simple fix for many low-ball launchers, unfortunately, it also increases spin rate (all other things being equal).

Which brings us to our next point – spin rate.

In general, if you are launching the ball high enough (and in order to achieve maximum distance), a lower spin rate is preferable. We don’t want it so low that the ball dive-bombs out of the sky – but at the same time we don’t want to be spinning the ball enough to get a whispy flight with very little roll.

To put this into perspective, a ball launched at 18 degrees, 135mph ball speed and

(data according to Flightscope trajectory optimizer)

So you could potentially be leaving 25 yards on the table from spin rate alone. Many amateurs are in the high end of that spin bracket – mainly due to poor strikes. So, how can we reduce spin rate on the ball?

Also, things such as the ball material and how friction-less your clubface is makes a difference.

So, in order to knock the ball out there past your buddies, there are just a few things we need.

The majority of these things are affected by strike quality – for example, where you strike on the face horizontally and vertically not only massively affects direction, but backspin rate, launch angle AND ball speed. Changing your angle of attack can also allow you to increase launch without reducing smash factor (energy transference) and without increasing spin rate.

If you want to improve your ability to strike it like the pros (as well as change your angle of attack), these topics are discussed in depth in my video series – The Strike Plan. Click the image below for more info.