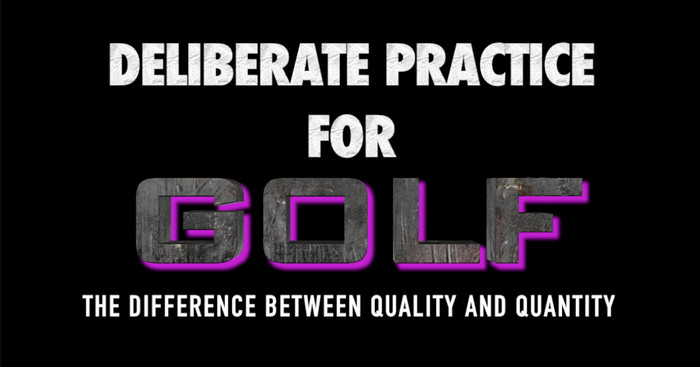 What separates the wheat from the chaff? Why can some people practice so much yet not get better? By understanding deliberate practice, it will help you to not only create a more efficient practice routine, but will help you play better on the course too.

I realize that most of you will be thinking;

Phft… why would I want to read about ‘deliberate practice’?

But I also realize why most of you don’t improve or get much out of your practice. See a correlation? 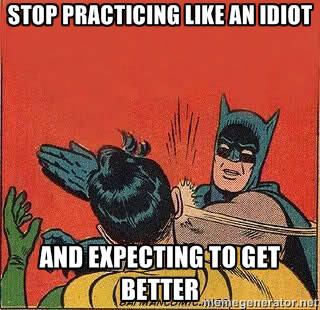 Today, I had a typical lesson with an ok player struggling to get better. He practices a lot, but I can see his practice is very inefficient, and all the hours of work he puts in pretty much go to waste. If this sounds like you, listen up.

We were out on the chipping green, and (after some technical adjustment) I gave him a task.

The guy proceeded to beat balls one after another like a machine gun.

Even after the first round of shots, a clear and predictable pattern emerged. His shallow divot shots were landing softer and finishing well short of the hole. His deeper divot shots were landing further and lower, tending to go racing past the flag. I watched him for 5 minutes, completing probably 25 rounds (yes, 75 balls in 5 minutes). Every single one he did the same thing – deep divot long, shallow divot short. 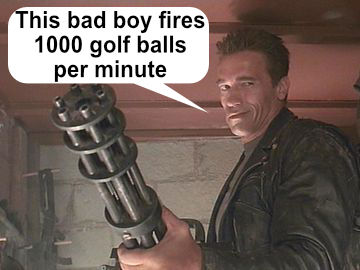 I interrupted and asked a question.

What happens to the result when you hit the different divot depths?

To which he replied

To which I asked

So, what do you need to change

To which he replied

I should use less energy with he deeper divots, and give the shallow divot shot a bit more 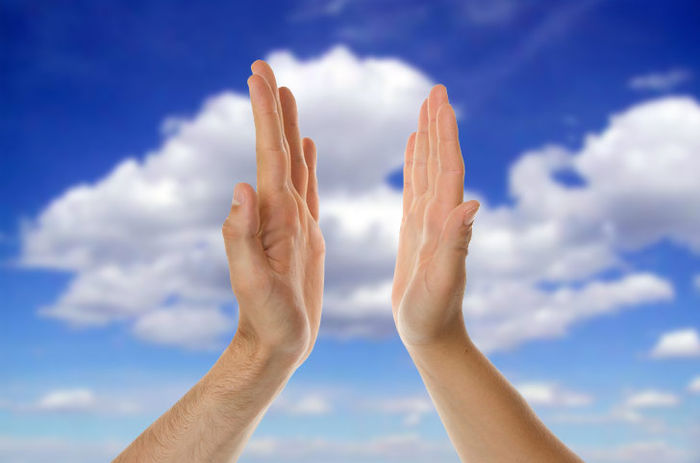 With that in mind, I bit my lip and refrained from what I really wanted to say (which was something along the lines of slapping my forehead and asking “Why the hell aren’t you doing it then”), and asked this instead;

What could we do to improve your ability to do that?

To which we came up with these things 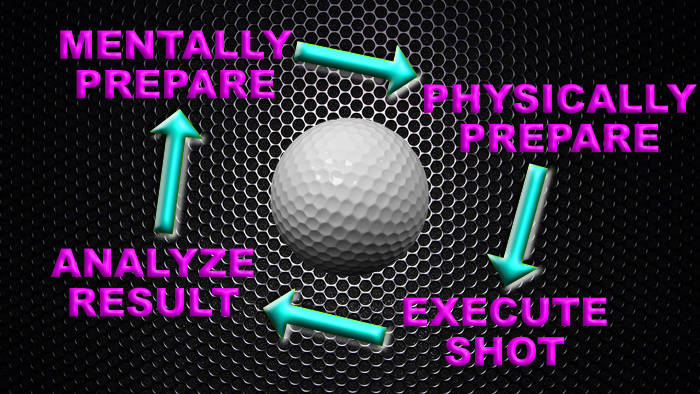 This doesn’t necessarily mean going through a full on, Jason Day-esque pre shot daydream for every ball you hit. However, get a clear picture in your head of what you want to achieve with the shot. Imagine how it is going to fly, land and roll. As R Kelly once said

he also went on to claim he believes he can fly, but that is neither here nor there. 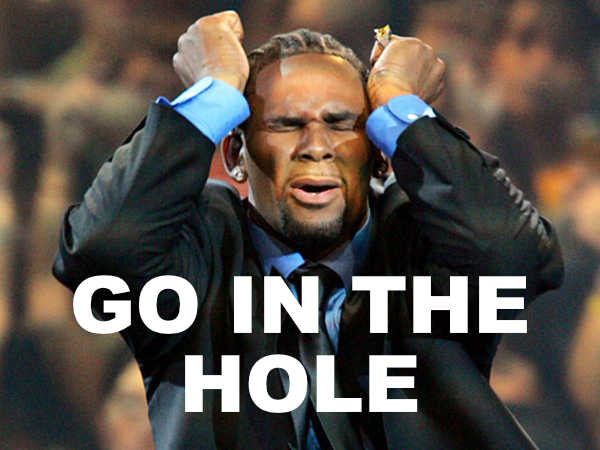 I wrote more about visualization in these two articles.

Ideomotor Effect for Golf – the power of visualization

This is simple – just do a few practice swings (or at least one – especially for most short game shots).

While this is a physical preparation, it actually works on a psychological level. It is mentally priming yourself for the desired movement. It is taking that visual image you created from step one, and putting it into the physical realm – connecting mind and body. Also, if your practice swing didn’t feel like it would match the outcome desired, you can always re-do it.

A good exercise which you can take to the course is to not just make a practice, but hit an imaginary ball as you do it, then visualise what that imaginary ball would have done. 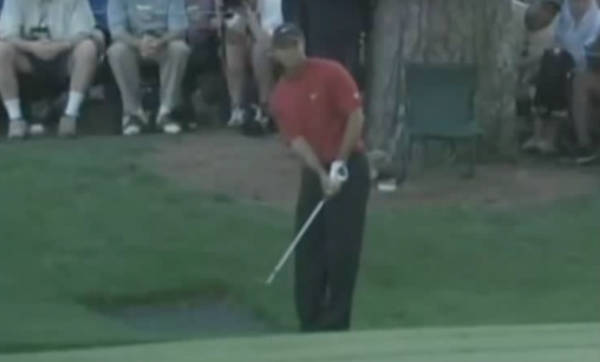 In 2005, Tiger Wood’s famous chip shot, he makes a practice swing and holds this position for a number of seconds as he gazes at the green. What do you think he was doing??? Visualizing his imaged shot.

In the example lesson, the player decided that it would be good to physically prepare for the shallower divot by making a bigger swing with more speed to account for the general loss of distance – and vice versa for the deeper divot shot.

After you have hit your shot, watch it. Absorb it. Experience it.

I see so many golfers who have hit another ball before their first one has even landed (in practice). Your brain is not going to be able to make the connection between the result and the movement you used to produce it if it doesn’t experience both.

Watch the flight of the ball – watch the ball land and bounce. Look how it reacted on the green. How did it spin? How did it roll? 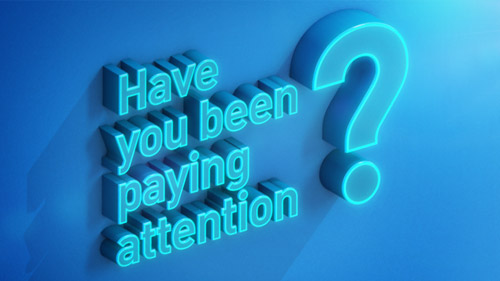 By doing the above, you get to learn even from your poor shots. Did your ball fly a little lower than you thought, but then checked up quicker? Ok, maybe factor that in for the next shot which.

Now, repeat the above for each shot, but use the information gleaned from each cycle to adapt for the next one. E.g, if the last time you did the deeper divot shot it flew over the green, try to factor in a smaller swing with less energy next time you come to that shot.

I’m sure you have heard this term before. Well, don’t just hear it – LIVE IT.

Start practicing this way with almost every shot. There are certain scenarios where ball beating may be acceptable. But, generally, you should be going through this process for as many of your shots as possible. Then continue to repeat this process on the course.

Also, make sure that you set up practice scenarios which demand this style of thinking. Blocked practice encourages ball beating, and it disengages your mind to the point that learning dramatically falls off, even if your performance increases (the dichotomy of performance vs learning). 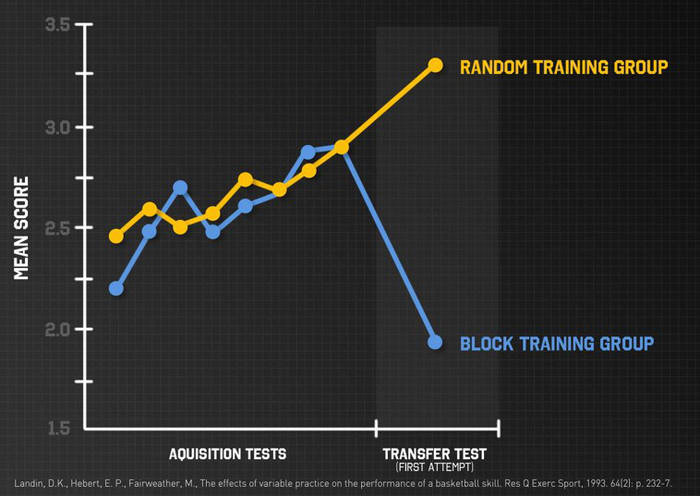 By practicing in a random fashion, or doing variability or differential practice (links to more information about these at the bottom of this article), it encourages a mindset where you have to go through the mental and physical pre-shot preparation and analysis – a pre-requisite for practice which actually transfers to the golf course.

If you are hitting more than one shot every 20 seconds, it is very likely you are exercising and not practicing.

I know a lot of players trying to make it. They are ‘working hard’ and practicing all hours of every day, in the hopes that one day they will break through to the big leagues.

The problem I see often is that these players substitute quality practice for quantity. That’s right – they think it is a race to 10,000 hours (no thanks to a bunch of books on the topic), or the winner is the person who hits the most golf balls. I can tell you that this is simply not true.

So, put down the bucket of 10,000 golf balls and your earphones, and start practicing like you mean it. Make every ball count – even on the practice range.

For more information regarding training techniques based on motor learning science principles, learn more about the best selling golf book on amazon. Click the link below for more details.