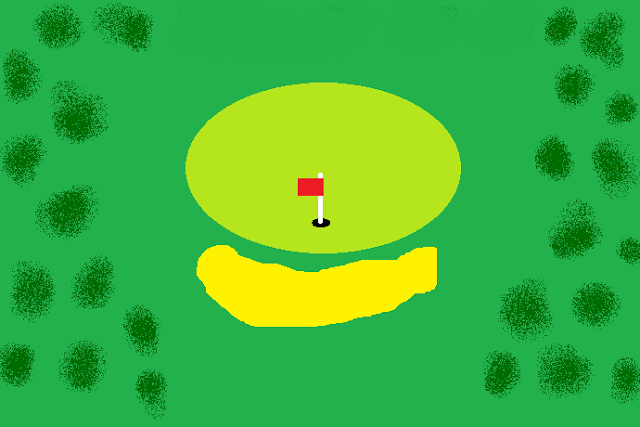 November 15, 2012 12:41 pm Byadmin InUncategorized
0
Continuing the theme of course management, I will now touch
on the topic of managing your distance. Many of the greatest players will agree
with me when I say that managing how far you hit your clubs is one of the most
important elements to a great golfer. There are many technical elements to
distance control, but this will deal with how to manage your strategy to
maximise your chances.
If we take an example below, we see a green protected by a
bunker at the front, a typical scenario on the golf course. The pin is also at
the front, enticing you to take it on. Whilst the strategy should be
individualised for every person, I have listed what I consider the best
strategy for both a good player (single figure handicap) and an average player
(above 10 handicap).

For the average player, the main aim is to avoid going in
the bunker, as this generally results in a dropped shot most of the time. It
would be better to be at the back of the green and putting from 60 feet than
coming out of the bunker, statistically. Add to that the fact that, even if you
did knock it to 10 feet, the chance of converting that to a birdie is probably
lower than 25%.
Therefore, the best strategy would be to aim to the middle
of the green and pick a club which will get there with an easy swing. E.g. If
it is 140 yards to the flag, play it like it is 150 yards. On top of that, if
your normal 150 yard club is a 7 iron, use a 6 iron instead and swing it easy.

By using this strategy,

For the better player, strike quality is generally much
higher, therefore distance control is also better. For this reason, a similar
but slightly different strategy can be more optimal. The things we have to
remember with the better player is that a ball landing in the bunker is
generally going to cost only half a shot each time (with a 50% up and down
rate), and that they are more likely to take advantage of a shot knocked close,
due to their better putting skills. This allows for a more aggressive strategy,
without compromising risk/reward percentages. This translates into a strategy
of aiming 10 yards past the pin (see below).

However, for the better player, the strategy would be to use
a club which would require a ‘hard swing’ to get there. For example, if the
flag is 140 yards away, play the club which would give you 150 yards if struck
nicely with an aggressive swing. This would usually be your 140 yard club hit
hard in most cases.
The reasons for this are

Don’t forget to adjust for the wind. Similar to our direction management talked about in the last post, we must adjust for the effect of the wind. If, for example, the wind is into our face, it will knock the distance of your shot down. The simple strategy change for this will be to aim 10 yards further (if the wind is a 10 yard strong wind) by adding an extra club (hitting a 6 iron instead of a 7 iron, for example).

When you look at the patterns of almost every player, they
are very unlikely to hit it further than the yardage they wanted. At least
half, it not all of shots end up finishing short of the intended distance. For
this reason, the general strategy is to aim further than the flag, allowing
your mistakes to work for you. This is not only practically efficient, but
psychologically. A player who aims past the flag and then executes their shot
perfectly will not be disappointed. Also, average mistakes will result in a
better shot, so the player will not be disappointed either. Who can be angry
with themselves for knocking it close? This is contrary to what you see on the
golf course from day to day – players making small mistakes and getting punished
big time. Imagine how many shots you could save per round, just by playing the
percentages.