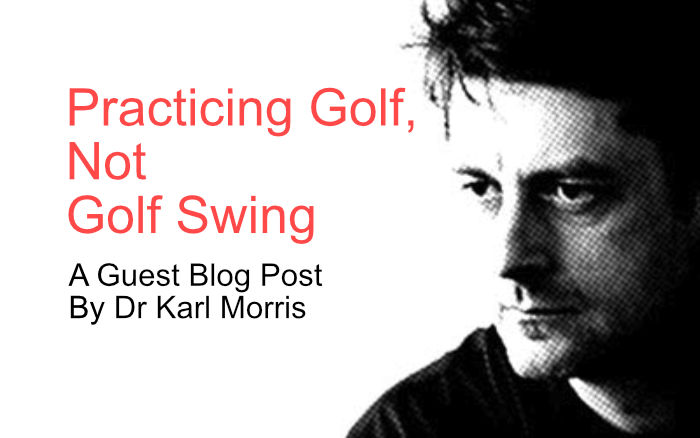 The following is a guest post by Dr Karl Morris

what do you WANT from your golf?

Think about that for a moment. What do you REALLY want from your golf?

The reason I ask is that if you want to score lower than other people, if you want a lower handicap than others and if you want to win tournaments, then you will probably need to practice a little bit differently than most people.

The mistake I have seen a lot of players make over the years is in not understanding there is a WORLD of difference between practicing your swing and practicing your golf.

The only purpose a golf swing has is to move THIS ball to THAT target, and to do that having good mechanics is a HUGE help. I firmly believe developing a good technically sound golf swing as a golfer is one of the best things you can possibly do, and working with a coach you can trust is one of the best investments you can make, BUT you should never fall into the trap of believing a good swing alone will make you into a good golfer. It won’t

A good swing is a PART of becoming a good player, but only a part.

Form is how your golf swing looks

Skill is having the ability to complete a task and the task at golf is to move the ball from A to B.

To learn to become a good golfer requires you become good on the GOLF COURSE and not just the range.

There is a SCIENCE in swinging the club well, but more importantly, there is an ART to playing great golf. And guess where you need to be to develop the art of golf?

Time and time again I have seen young players become addicted to practicing and being on the range.

They become great swingers as opposed to great golfers.

Think about how the context of the range is SO different from the golf course.

Ball after ball from a perfect lie with no consequence, and then we go to the course and suddenly it is ONE shot from a bunch of imperfect lies and situations, and EVERY shot counts on the scorecard. There is NO gap on the range between shots, and then there is a BIG gap between shots out on the course. As I say, the range has a VERY important part to play in developing your swing, but the GOLF COURSE is where you are going to learn to be a golfer.

Look at the course as somewhere you go to PLAY golf to LEARN golf.

You don’t learn golf on the range.

I am going to share with you some games I want you to play on the course that will not only be fun but will also allow you to be developing BOTH your technical and mental games at the same time. They will also help you develop the ART of becoming a great player.

Even though many of you may never have seen him play at his best I am sure you will have all heard of the name of the great Severiano Ballesteros.

Seve was the golfer I idolized when I was a junior golfer. He was the most incredibly charismatic golfer who could hit some really wild shots but had an unbelievable ability to score and get the ball into the hole from the most unlikely of positions.

I remember going to watch my first British Open way back in the summer of 1983 at Royal Birkdale and I saw Seve for the first time as he walked onto the second tee in a practice round. To this very day I can still see him clearly in a pair of gleaming white Footjoy shoes, black slacks and a white Slazenger sweater.

He walked onto the tee and dropped a ball down onto the tinder dry turf, and I can still hear the noise like a bullet from a gun as he drilled a 1 iron down the middle of the fairway.

Believe it or not, everyone used 1 irons in those days!!

Seve came from a very poor background and he learned to play the game on the beach at Pedrena in northern Spain with only a three iron.

He could chip with that three iron, he could play high shots, low shots, bunker shots…you name it and Seve could do it with that rusty old three iron.

How do you think he then managed later on when he had a full set of clubs, all the wedges?

How easy did the game seem then?

I am not saying you need to throw all of your clubs away apart from your three iron, find a beach and get to work but what I would suggest is that you start to play a few 9 holes on the course with just 3 or 4 clubs.

Go out with say a 3 wood, five iron, wedge and putter and SEE what shots you can create with these clubs.

Begin to fire your imagination by taking loft off the club, adding loft on, shaping the ball left to right, right to left

PLAY around with what you can do with the golf club to affect the flight of the golf ball.

Let your brain learn from PLAYING

Go and PLAY golf and explore the possibilities.

As I say, you will be training BOTH your mind and body and developing shots that you WILL be able to use at some vital moment in the future when you need to make a par on a tough hole to stay in contention.

By playing with 3 or 4 clubs you will FIND a way of getting the ball around the golf course with less than you’re A game.

You will be PLAYING golf, not just golf swing.

One of the mental game habits I suggest you aim to develop is the habit of TENACITY. The ability to get the ball around the course when you are less than at your best swing-wise.

We hear so much about consistent golf swing being the goal when the only thing I have found in over twenty-five years of coaching is that you will NEVER have a consistent swing. Ben Hogan didn’t , Jack Nicklaus didn’t, Tiger Woods didn’t and Rory McIlroy doesn’t . The swing will ALWAYS let you down to some degree. That isn’t a negative, it is just an understanding of the reality of the game and the way that our brain works.

What you can be outstandingly consistent with is your ATTITUDE. And if you have an attitude that says ‘I will get this ball around this golf course WHATEVER my swing is like today’, then you will be a VERY tough opponent to beat. If you have to swing well to score well, then you will have a lot of poor scores and you will always be at the mercy of the inevitable ups and downs of the swing. I am not saying you should have the intention to have a consistent swing; that SHOULD be a primary aim. What I am saying is that, when you accept the swing will come and go and you DEAL with that, then the game cannot hurt you.

You become mentally TOUGH and TENACIOUS.

One brilliant game to practice this is what I call deliberate miss, and again, it is a practice game you PLAY on the golf course.

Then see what score you can compile over 9 holes when you don’t hit a single green.

Just imagine if you can still get it around in something close to par without hitting a single green.

And you will, eventually.

What does that tell you that you can still do even if you haven’t got your A-game with you?

This is the essence of TRUE confidence; the knowledge you can STILL get the ball around the course whatever the state of your swing.

Another game you can play on the course ties in with what Sir Nick Faldo once said when he remarked the secret to the game was not how good your good is but how bad your bad is.

We can all hit good shots but it is how destructive the bad ones are that will determine our success in terms of score.

Again over nine holes play WORST Ball where you play TWO shots of the tee and you have to select the worst of the two, you then play two shots from the worst tee shot into the green.

Again, all the way into the hole.

If you have a four-foot putt for par, you have not made a par until you have holed BOTH putts.

This is an incredibly difficult game and you obviously have to play it at the right time in terms of the golf course BUT it is a game that WILL show you how bad your bad is.

By playing this game with two balls when you go back to playing with just one the game will not be easy but it will certainly SEEM easier when you only have to get one ball all the way into the hole.

This may be a very different way of looking at your practice but in my experience if you begin to play these games regularly you will literally transform your game and at the same time toughen your mind.

Dr Karl Morris is one of Europe’s leading Performance Coaches who has worked with and achieved success with SIX Major winners and over a 100 PGA Tour, European Tour, LPGA and Ladies European Tour golfers. Check out the Ultimate Player’s Programme from Dr Karl Morris by CLICKING HERE