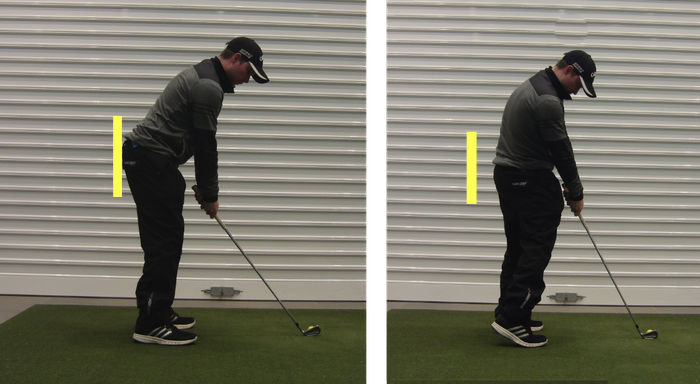 In this article, I will explain the myth of early extension, as well as why your attempt to fix it may be hurting your game more than helping you.

One of the commonest problems I hear people say is

I keep losing my angles

The butt comes ‘off the line’ and moves forwards, the head moves away from the ball, the spine gets very vertical.

This has been linked to several issues such as shanks (due to backward movement of the spine severely shallowing the club through impact and the hands getting away from the body). However, you could just as easily link this move to a toe shot, due to the fact that the lead shoulder ends up farther from the ball at impact, which could either result in a toe or a thin shot.

In any case, early extenders will struggle like hell to maintain lag or shaft lean – simply because they wouldn’t be able to strike the ball with the combination of early extension and forward shaft lean.

But Extending Aint One

Unfortunately, the go-to ‘fix’ for this kind of fault is to try and ‘maintain posture’ through the swing; in other words, taking the angles you make at address and trying to maintain those angles throughout the swing.

This problem is often met by attempts to reduce the amount of extension the player does. However, I contest that this is not only wrong, but detrimental.

In my opinion, rather than taking away the extension, we should be adding something to the swing (to be explained later).

Extending is not a fault – in fact, an extending force is a necessary element for a golfer to create speed, dynamic balance and a good hand path. For that reason, we shouldn’t be trying to reduce the extension. Let me explain.

When a professional golfer swings a club in front of their body and releases it, a tremendous amount of force pulls them towards the ball. 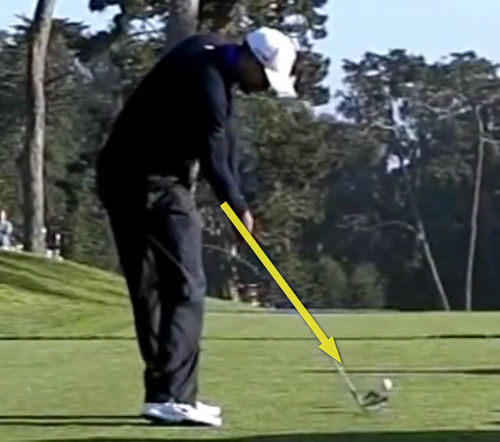 If you are having a hard time picturing this, grab a heavy iron bar and swing it like a golf club as quickly as you can. You will be pulled forwards off balance through what would be the impact area. For a professional golfer swinging a driver at 120 mph, this force pulling them forwards can reach (I have heard estimates of) around 150lb.

Now, we know that if you have a force of 150lb pulling you forwards, you had better be pulling back against it. This is a game of tug of war with the forces of the club, and if you lose you are going to get pulled forwards off balance. However, if you pull with an equal and opposite amount (150lb in the opposite direction), you will have the appearance of maintaining your angles. Some professional golfers manage to overcome the forces of the club and raise their bodies up through impact.

Imagine if the club were pulling you forwards with that much force and you were trying to ‘hold’ your body angles. That would be like trying to win a game of tug of war by standing still.

If you wanted to swing an object in a circle around your body as fast as possible, what would you do? Well, someone who knows the answer is an Olympic hammer thrower. 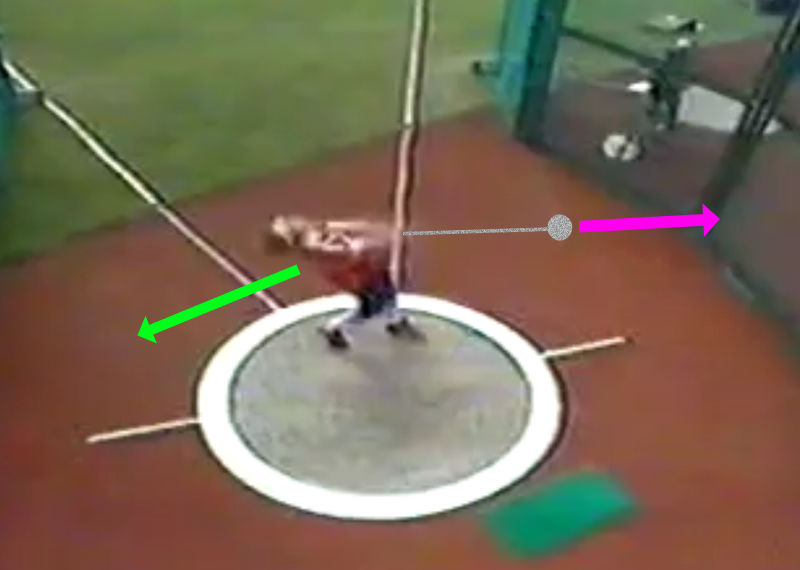 We can see that the hammer thrower is pulling back away from the hammer with all his might. What is interesting is, even though the hammer thrower’s arms are straight here, he is not straightening them. If anything, he is trying to pull them towards his body as hard as he can.

Does this hammer throw remind you of anything? 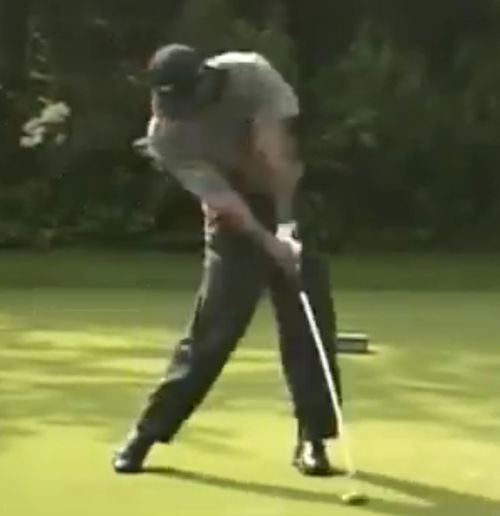 We now know that one of the hallmarks of a good player is that their hands raise through impact. This is discussed in-depth in The Strike Plan. 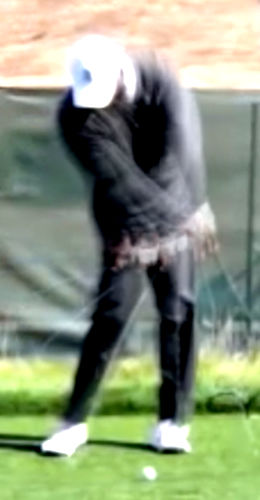 While a big part of the hand path movement being attributed to the left shoulder moving up and away from the ball through impact, this is often facilitated through body extension. As we can see in the below pictures, during the execution phase of the swing, lots of professionals actively extend their body upwards, helping to create this hand path. 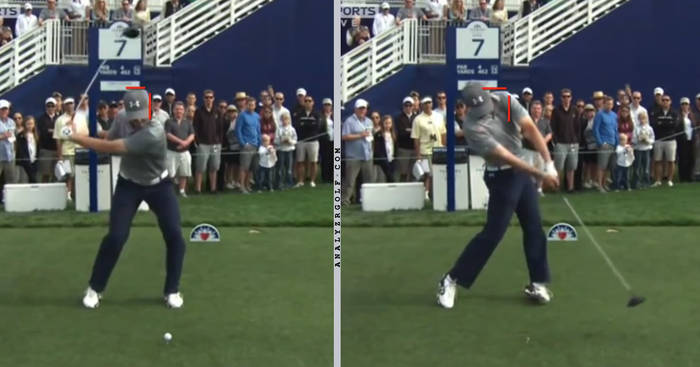 With Spieth, we see the left leg and pelvis raising upwards, as well as the head backing away from the ball

We see the same thing with Mcilroy, with the body moving upwards through impact via leg extension and spine extension.

Is It Really a Problem?

Besides – is early extension really a problem?

Not many angles were maintained in the making of the above swings.

I know what you are thinking.

But I have seen videos of professionals maintaining their angles

And you are part right – there are pros who are in a similar spine angle at impact as they are at address. So, what is the difference between the guy who early extends, and the pro who maintains their angles?

The answer is not that the pro is not extending/trying to extend through the execution phase. The answer is in what precedes it. In order to explain this, let’s have a look at one of the ‘cleanest’ looking swings on tour – Adam Scott. 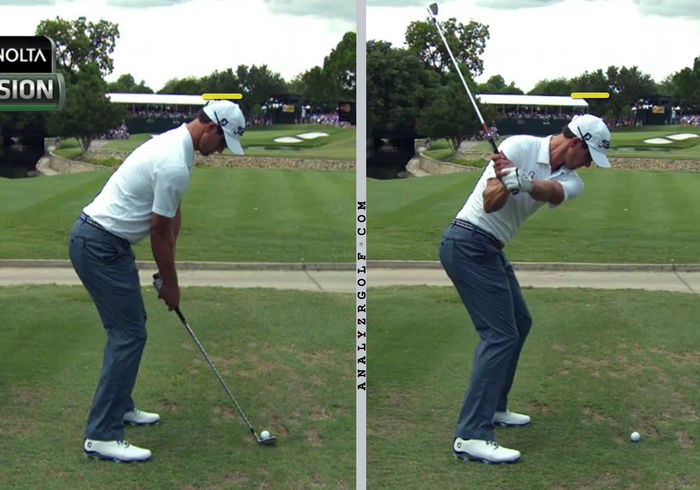 The yellow line represents his head height. Look how much lower his head is by the time his left arm reaches parallel in the downswing. He has essentially squatted down.

Let’s look at another example – Tiger 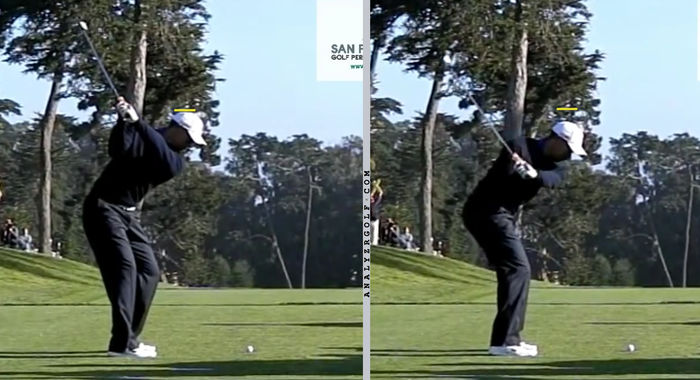 Here we see a significant lowering of body height from Tiger between top of the swing and left arm parallel in the downswing (transition). From this position, he could aggressively extend his body up and away from the ball (helping to create incredible speed and a good hand path) while still staying more flexed than his original posture. This would give the illusion of maintaining his angles.

We see this in the below picture, 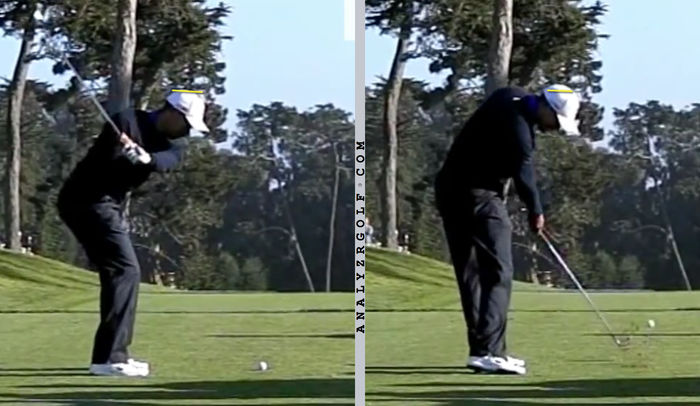 Another hot player right now – Jordan Spieth. Let’s look at his head height during the transition. The left picture is before the top of the swing, the right picture is after transition. 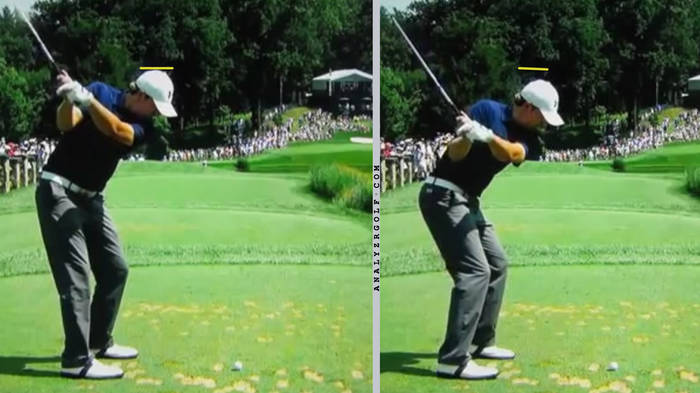 Again, we see that squatting down and lowering of the head. This is followed by the extension during the execution phase, as shown in the below picture. 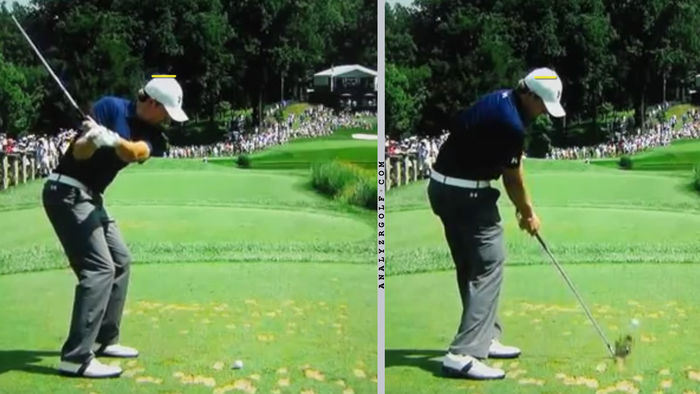 Interestingly, Spieth (as are most players swinging an iron) is still lower down at impact than he was at address (head height). So, even though he has extended upwards through the execution phase, he didn’t extend above where he started. 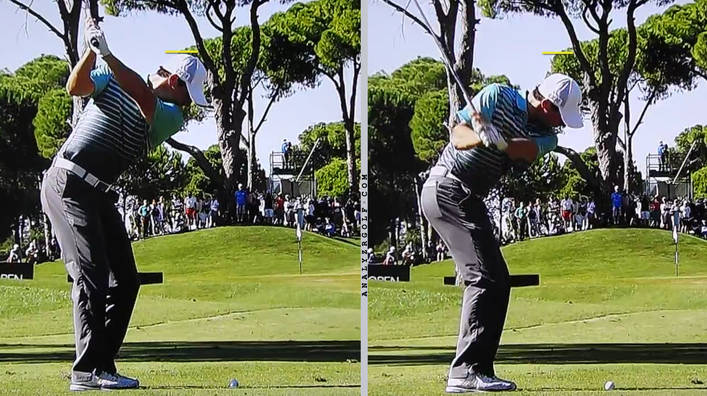 A very noticeable drop in height (similar to Tiger) during transition. 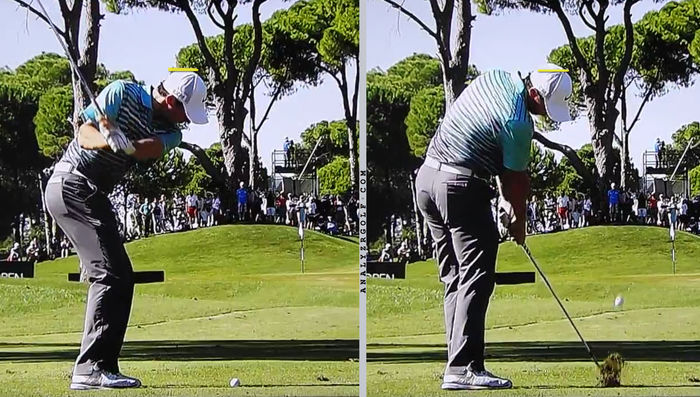 So, we have destroyed the idea that pros aren’t extending through impact – they are! Even if they are not physically moving upwards as in the examples shown, they are still fighting the pull of the club and the preceding acceleration of the body towards the ground during the squat phase.

Let’s look at an example of someone who is early extending to see what is different. 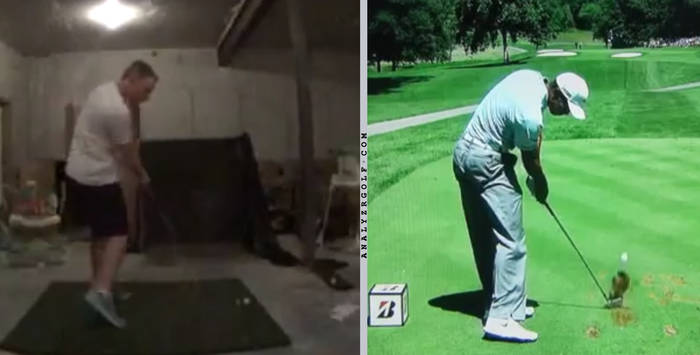 The above player is in what we would class as an early extended position. Compared to Tiger on the right, we can see that the player has lost their posture angles, resulting in high hands and clubshaft, which will also result in a reduced ability to have forward shaft lean at impact.

But, rather that trying to maintain posture through the swing and not ‘raise up’ through impact, let’s have a look at the transition of this player.

Here we see the issue. This player didn’t have any squat during the transition. 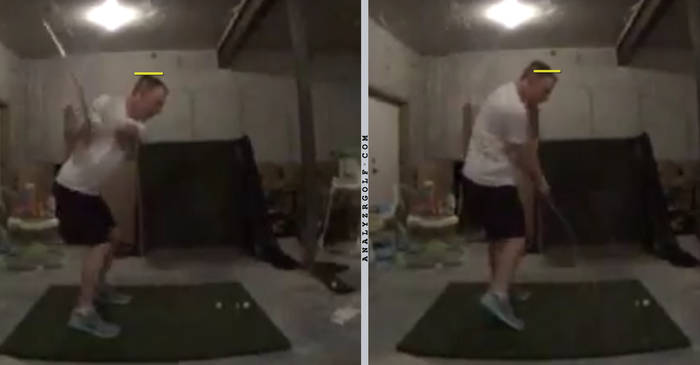 As a result, during the raising phase (execution), this player ends up with their body much higher than they were – giving the ‘early extended’ look.

Some info that you don’t need to know, but you might find interesting

It’s also important to note that, without the squat during transition, it requires less force to push the body upwards. This is because, when we squat, our body is momentarily accelerating towards the ground. We then require more ground force to reduce the body’s acceleration towards the ground and turn it into (what appears to be) a stable head, or (in the professional examples show) a head which moves upwards and away from the ball.

Top pros use this (unconsciously) to create more ground force and thus more ability to produce speed and power.

So, in my opinion, one of the biggest myths is that pro golfers maintain their angles. The difference between someone who early extends and a player who seemingly maintains their angles usually lies in the transition – where professional golfers tend to add some squat.

Body extension forces through impact can help with

so we should not look to get rid of this. Perhaps, instead, we should be looking at the moves which precede the early extension.

How I Use This Info

When I am teaching, I use this understanding to visualise how it fits in with the variables the player brings to the table, and how it may effect their ball flight/consistency.

For example, if a player were to add more ‘down and forward’ squatting motion in transition, how would this affect

If you want to learn more about the techniques that the professionals use to strike the ball so crisply and consistently, check out The Strike Plan below.

While there could be many reasons why you would early extend (clubface too open, trying to add loft, trying to not hit the ground, clubshaft too steep in transition), this article explores the idea that trying to maintain your angles might not be the best idea. The best players in the world are often not staying in their angles, but going through certain squatting/extending moves at specific times in the swing.

Also, it is not 100% necessary for the head to drop and raise as the examples shown – this is just a pattern seen in a lot of good players – especially with iron shots. What is more important is what the hands are doing through impact – and this can be facilitated via this squat/raise type body action.