How Your Expectations Are Killing Your Golf Game 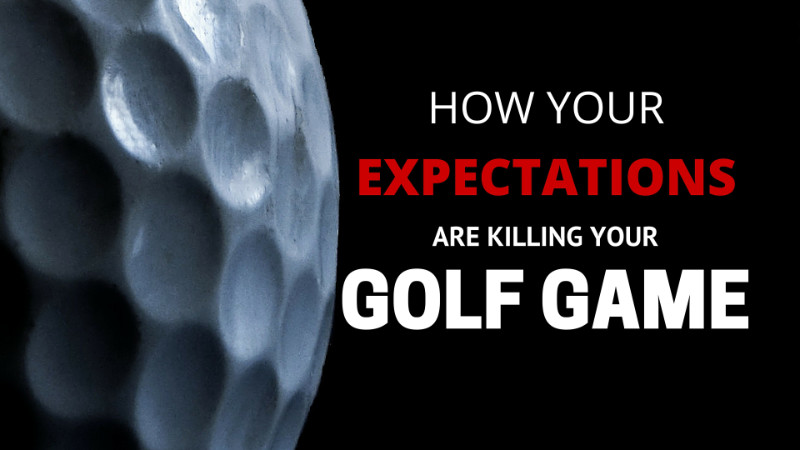 How Your Expectations Are Killing Your Golf Game

When I was a junior golfer, I was never happy with my game. While I believe this may have been a powerful driving force to my rapid improvement (I practiced endlessly to try and master the game), I look back now and see how this also held me back.

I always had incredibly high expectations – for some reason, I thought that the pros were infallible (check out the great video at the end of this post), and I wanted to emulate them so much. And when reality doesn’t match out expectations, this is the quickest way to dissatisfaction. 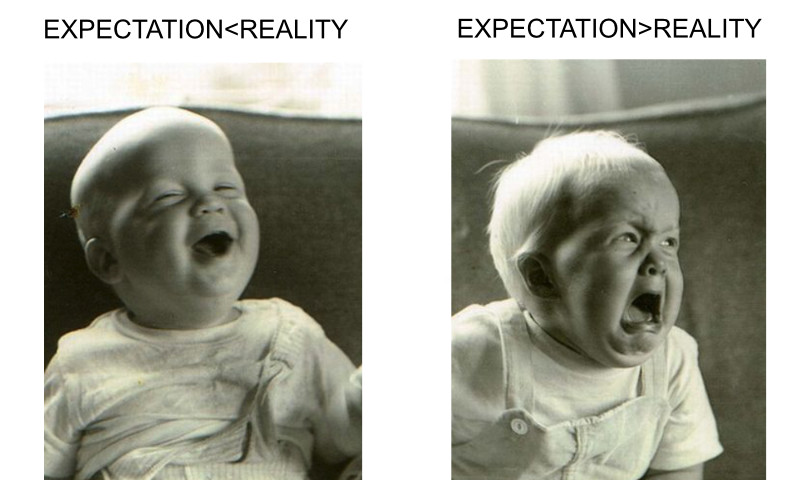 And when we are unhappy with our game, this affects both our confidence and our perceptions of the shots we take, and (ultimately) our future form.

A 15 handicap player tees the ball up on the first, pulls his driver out of the bag and aims down the middle of the fairway. It starts down the middle, before carving off to the right and landing in the deep rough.

I always miss right with my driver

When I ask players how often the average tour player hits a fairway, I am often met with something in the region of 85-95% of the time. Let’s look at the reality; 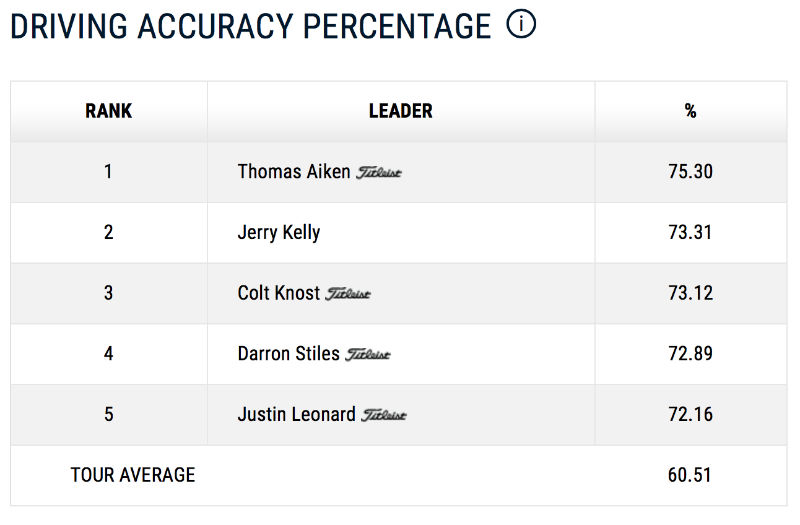 In fact, as we speak, World number one (Jason Day) only hits an average of 56% of fairways. So, if the top professionals who

are basically hitting the fairways at a rate slightly higher than a coin-flip, why the hell are you so worried when you miss one? In fact, the fact you are so worried about missing a fairway might be increasing your miss rate, as you are less likely to swing freely when you have fear.

Proximity To The Pin

The player is now stuck behind the tree, decides to take the safe option of chipping out to his 7 iron yardage. Pulling out his favourite club, he aims eyes down the pin tucked on the left. He makes his swing, strikes it pure and it looks great – but at the last moment it starts to veer left, and he just misses the green. 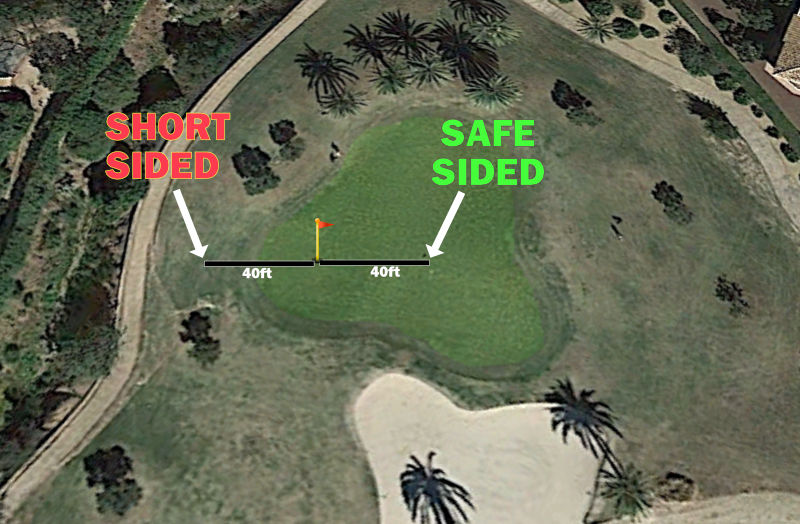 A 40ft miss could mean a 2 putt, or a 50% chance of up and down (effectively costing you half a shot)

Again, when asked, lots of my pupils will believe that the pros will hit their 7 iron to an average of 5-10 foot from the pin. Let’s look at the reality

From the above, we can see that the average proximity to the pin (distance they hit it to) with a 7 to 5 iron from the fairway is 35 foot. This is 10 yards – and that could be 10 yards left OR right, effectively creating a 20-yard circle.

And that’s just the average. Sometimes they hit it worse!

I often find amateurs also have a side-to-side dispersion of around 10 yards (20-yard circle) – the difference between them and a pro is often in distance control, aim management, or club selection.

The player gets his chip shot close enough from a difficult up and down position. He proceeds to stand over his 8-foot putt for par, pulling the trigger and just missing on the left side.

I’m such a useless putter.

How often should an amateur expect to hole an 8-foot putt? Let’s have a look at what the best players in the world do on average?

Again, a small percentage more than a coin flip. And these players are playing on the best greens in the world.

So, next time you miss an 8-foot putt – let it go. Perhaps you should have chipped it/lagged it closer – that is probably something which is more in your control.

Our player goes through a mixture of form during the round, having many 3-point birdies, but throws in the odd blob/scratch/zero point hole.

If only I could get rid of those bad holes

I can’t remember the last time I played a round without making a mistake – in fact, I don’t think it has ever happened. Mistakes are just part of the game, and golf is more a game of constant damage limitation than it is ‘perfect play’. Golfers mistakenly believe that they are going to one-day figure it out and start taking their A-game to the course shot after shot.

This is NEVER going to happen.

You are better off figuring out

than you are striving to achieve the impossible of hitting it your best all the time. No matter how good you are, there will always be inconsistencies – even the top pros hit great shots and poor shots in a round of golf. It’s just that they are operating at a much higher level.

The player eventually signs for a score of 29 points.

I can’t believe it. Last week I had 36 points. I am so inconsistent.

I also hear this one a lot – a player may have a week-to-week swing of 6-10 shots and think that the world has come crashing down on them. Let’s get something straight – this is perfectly normal. In fact, last year;

So, over the course of the year, we can see close to a 20 shot swing even with the best players in the world. So, quit fretting about the 6-10 shots difference between your last two rounds, and start working on getting better overall. This way, you will be bouncing around from 65-75, not 85-95. 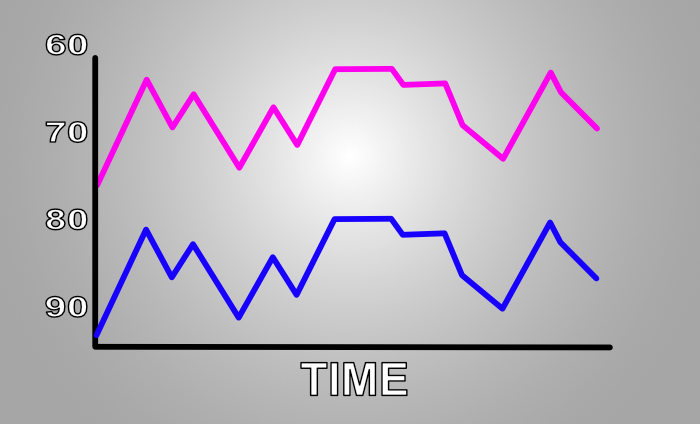 The problem is, we seem to hold our expectations in line with our best ever games.

Sure, we have had those days that we hit almost every fairway. Yes, we have holed every 8 footer we set our eyes on. And yes, we have all stiffed it to that pin tucked on the left. But we have probably all flipped 10 heads in a row too. And if an infinite amount of monkeys slammed a keyboard for an infinite amount of time, one of them would eventually write the complete works of Shakespeare.

But holding yourself to this unachievable expectation should not be the goal. It is not going to make you happy in the long run, and may even cause more tinkering, leading (ironically) to more inconsistency.

Also, while we shouldn’t compare ourselves against the pros, it is worthwhile seeing that they too are fallible.

Most of their shots are coin flips – but they seem to get it around nonetheless. Surely working out how they do that would be more beneficial?

Even then, sometimes it is really fun to watch the pros suffer. After all, it makes us feel better about our own games. See the below video.

Get the Amazon best-seller in 5 different countries – The Practice Manual – The Ultimate Guide For Golfers is the book revolutionising how golf is learned and taught.

Learn more about the book – Click the image link below