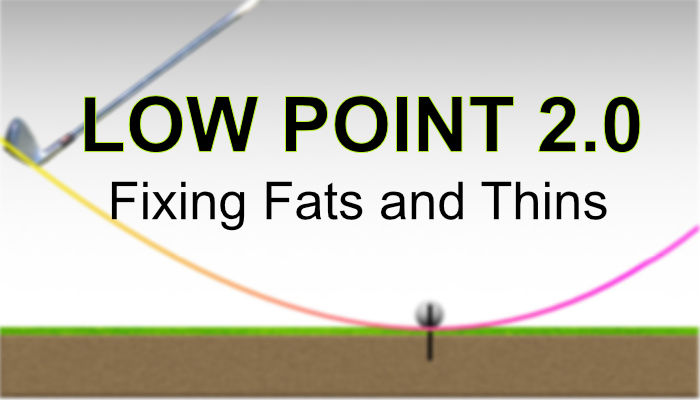 Do you want to find out how to fix your fat and thin shots? Want to spin the ball better? Desire more consistency and distance control? Need more total distance too?

Of course you do.

Last month, we discussed the idea of the swing arc, low point and contact point with the ground. If you haven’t yet read that article CLICK HERE NOW to be redirected. Alternatively, the information in this article should still make sense.

This week, we look at how to fix potential problems, and what other effects that might have on the ball flight. Let’s go!

Below is a common issue with many golfers of a middle handicap. They have learned how to hit the occasional decent shot (so their low point is in front of the ball slightly), but the first point of contact with the ground is too far behind the ball (red star), causing lower energy transference, distance, spin and consistency. 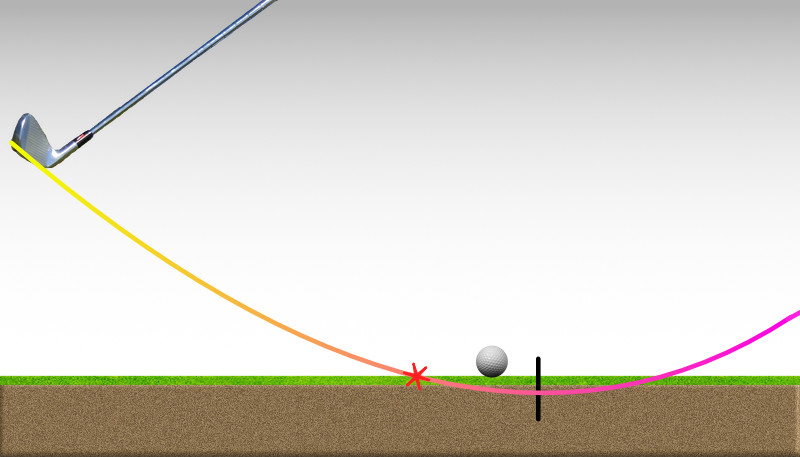 In this scenario, we have two options available to us (there is a third, more advanced way, but we will discuss this in future articles). We can

Both will have the effect of shifting the contact point with the ground farther forwards, creating a better strike quality.

If we raise the swing arc, it will have the desired effect, as shown below. 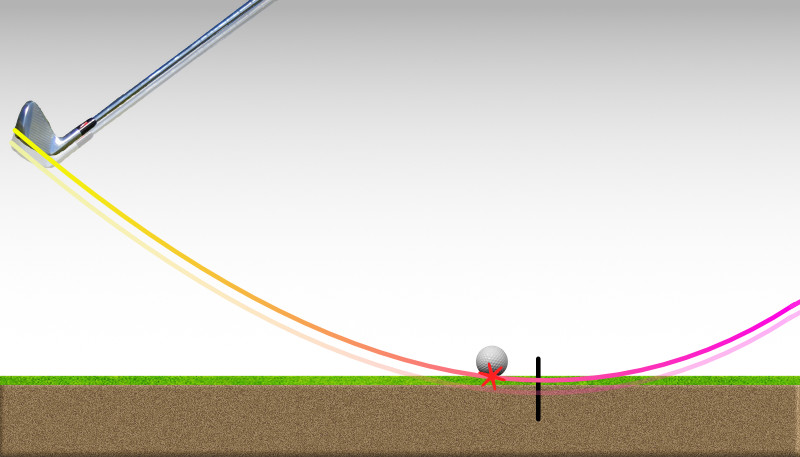 This will also have the effect of maintaining

(depending upon how it is done). This can be a better option for people who desire to strike the ball/turf better without sacrificing peak shot height (as it doesn’t tend to affect dynamic loft and angle of attack negatively). As a result, slower speed players will get a great advantage out of this, being able to hit it farther and carry the ball longer distances in the air.

It will also be a very good option for players playing from lush fairways, or where the ball is sitting up nicely. The main disadvantage with this approach is that you can lose some contact crispness when the grass is longer, and hitting out of rough becomes more of an issue. Players may also be more prone to ‘drop kicks’ on tight/links-style lies than using our next option.

Another option we have is to shift the low point of the swing forwards. This is seen below; 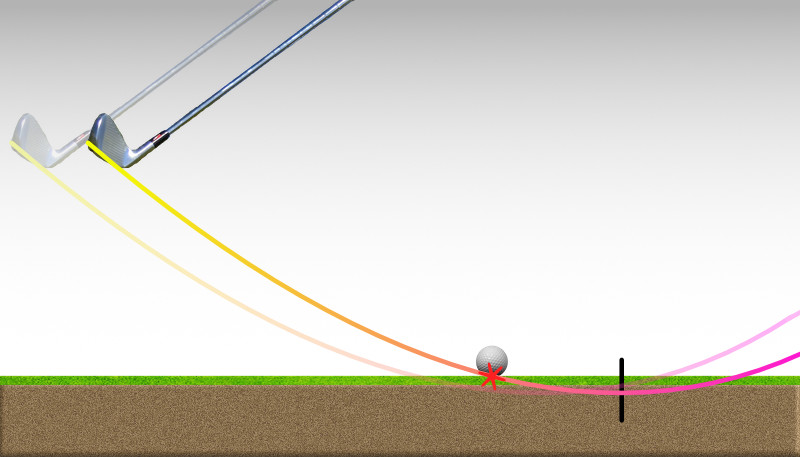 The old fat shot (transparent) is shifted forwards, so the low point goes much further in front of the ball. The divot depth is the same, but the contact point with the ground is closer to the ball.

As the ball is hit earlier in the swing arc (more towards the yellow part), shifting the low point forwards in this way (if no other changes are made) tends to

Also, if done dynamically (after set up – e.g. via weight shift), it tends to produce a more open/less closed face to path relationship. If done statically (E.g. by putting the ball back in stance and then squaring the face back up to the target) it tends to produce a more closed/less open face to path relationship. This is quite a complex concept, and I will cover this and simplify it in future articles.

Due to the tendency to reduce the dynamic loft at impact and steepen the angle of attack, the resulting ball flight may be lower than normal. For a high swing speed player, this can be an advantage to control the trajectory of the shot, and it is essentially what we would do in a ‘punch shot’. Conversely, for slower speed players, this may result in a ball flight that resembles an Exocet missile, reducing carry distance (and even total distance in some respects).

The above style can also be advantageous from rough, as the club comes in with a steeper AOA, and will trap less grass between the club face and ball. As it tends to reduce bounce, it can be a better shot from very tight lies, like a cart path or some links turf – minimizing the risk of drop-kick thins.

There could be two causes of a thin shot (there is a third but it is less commonly seen).

I’ll go through these a little more briefly, as it is simply the same as above but in reverse. Let’s look at the first one 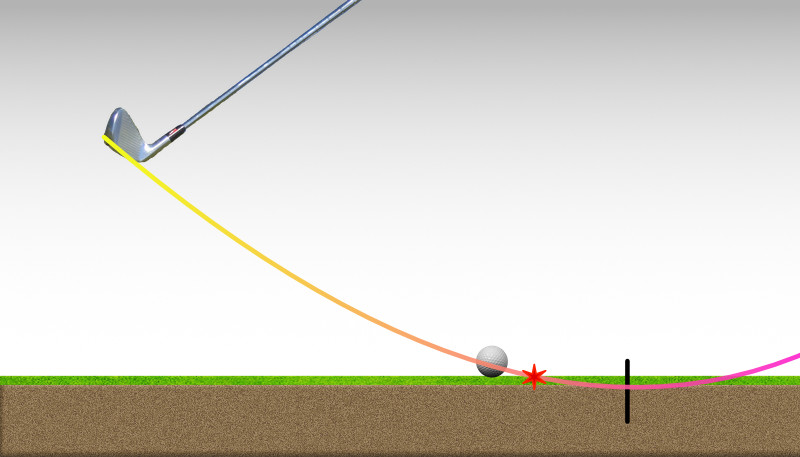 The above example is actually more common with average players than you would imagine. The low point of the swing (black line) is in front of the ball, but the arc height is not deep enough to create a functional contact with the ground – hence it’s striking the equator of the ball.

Typically, this happens with amateurs when their swing direction gets too far left, which puts the lowest point of the swing a long way in front of the ball.  Also, the body movement dynamics of an amateur can cause this to happen.

Here, we have two options available to us, as before, which are;

Both will have the effect of shifting the contact point with the ground farther back so it meets the ball, however, both may produce different results with other impact variables. Let’s have a look.

This can be a dangerous one for amateurs, as many of you already have a low point which is too far back, or even behind the ball. For this reason, make sure to consult your instructor on the best way for you – they can also guide you with how to do it. 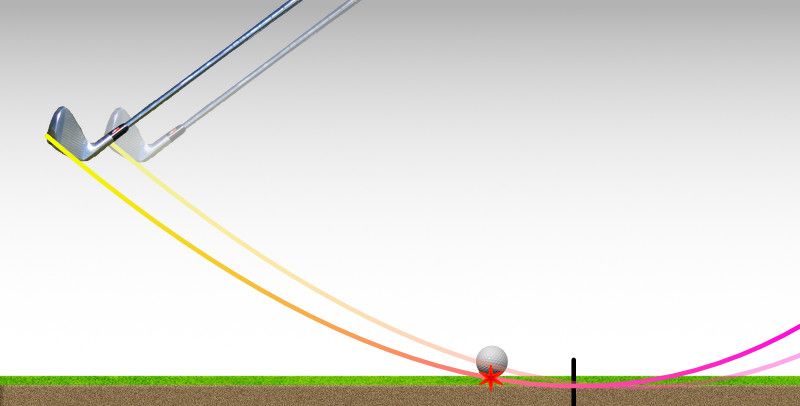 In the above picture, we see the old low point (very far forwards in transparent) being replaced by a low point which is farther back, making the contact point with the ground (red star) in a more appropriate place.

Again, to re-iterate, how you do this is important too, which is why you should see your instructor. There are so many ways to move the low point backwards that you need to find one which fits in with your current swing motion and makes it better.

By shifting the low point back like this, as the ball is being hit later in the swing arc (more in the purple part), the

Also, the face to path relationship (affecting slice/hook spin) tends to change depending on whether the low point was shifted dynamically (during the movement), or in set up (statically). I will discuss these more in later articles.

This change tends to produce a higher shot, so it can be good for players who launch the ball too low, and as it doesn’t dig as much into the ground, it tends to be a bit more forgiving and better on lush grass. 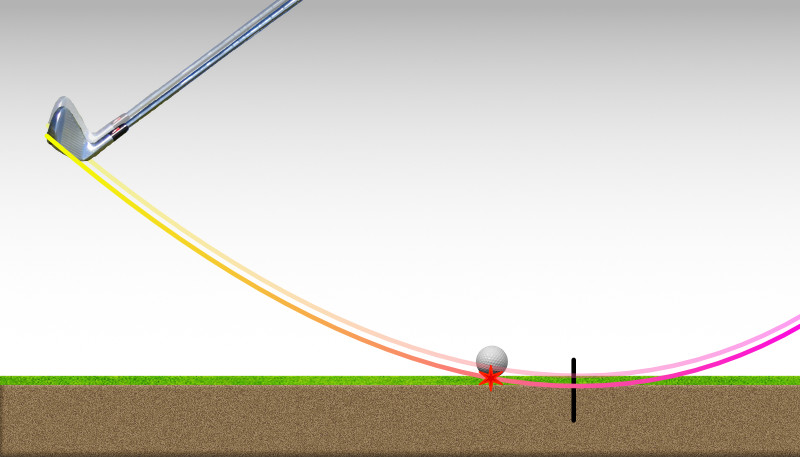 Here we see the old swing in transparent, with a low point marginally in a nice place, but the swing arc is simply not matching (too high). The newer swing (more opaque) sees a drop in arc height so it is actually creating a strike with the turf in a better place.

When we use this method, we tend to maintain

This allows us to keep the peak height of our shots, so for players who are already launching the ball too high, this might be a good option (although there are other ways to change height of shot which may be better).

If your low point is already significantly in front of the ball and you decided to do the above method, you may find that the divots get really deep. 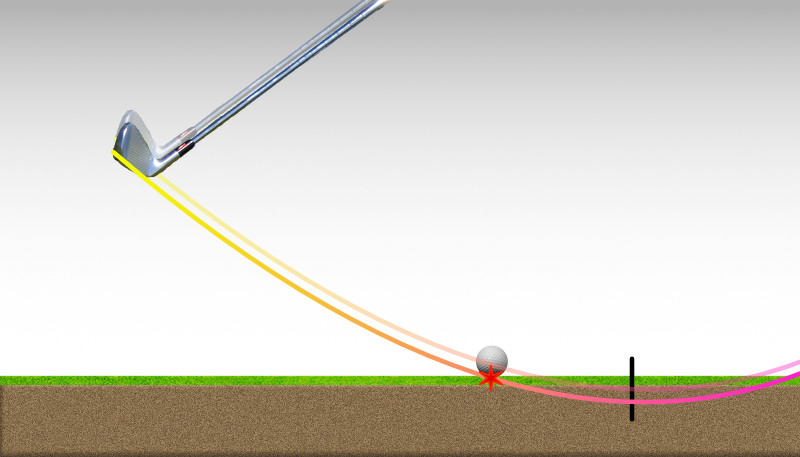 In the above example, we see a lowest point of the swing which is already very far in front of the ball but the ball is topped. Dropping the arc here may produce a better ground contact, but as the ball is hit in the earlier part (yellow) of the swing arc, dynamic loft is reduced, angle of attack is incredibly steep and divots will be massive (as shown).

Not a good combo.

But, I do both

What if you are player who both fats and thins the ball?

Well, let’s face it, the realities of golf mean that everyone will fall into this camp to some extent – even top pros occasionally fat and thin it. However, for beginners and high handicappers especially, they can fall into the category of having the low point too far behind the ball, as shown below; 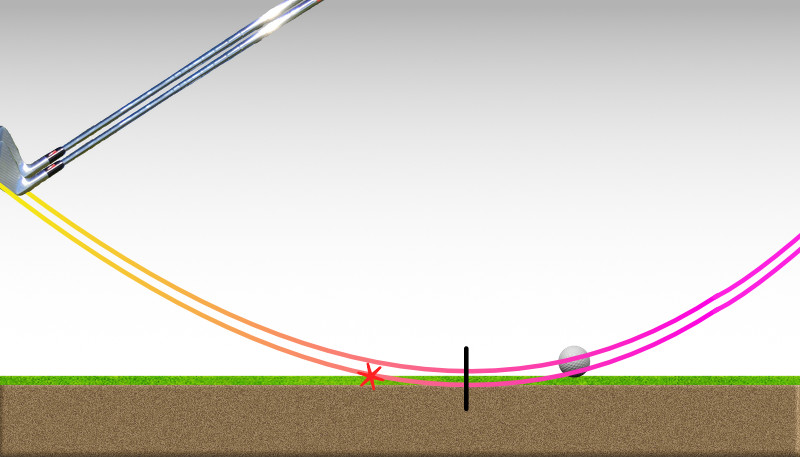 Our golfer in the picture above has no chance of solid contact at the moment. As their low point is so far behind the ball, if they hit the ground at all it is a foot behind the ball (red star). The player then links up in their mind that contacting the ground must be a bad thing – swings the next one higher and a topped shot ensues.

Stuck between a rock and a hard place – literally.

The answer in this problem is to shift the low point farther forwards for both the fat and thinned/topped shots. However, you might have to ask why a player has this type of low point position, and in most cases it is due to their understanding of how to strike a golf ball effectively (they may think they have to scoop it in the air), or the player desires to launch the ball higher than they should be.

Are you really in this camp?

Lots of people suffer both fats and thins not because their low point is behind the ball, but because of poor arc height control. For example, they may have a low point which is in front of the ball, but due to an inability to control how high the swing arc is, they can achieve both fat and thin shots, as shown below. 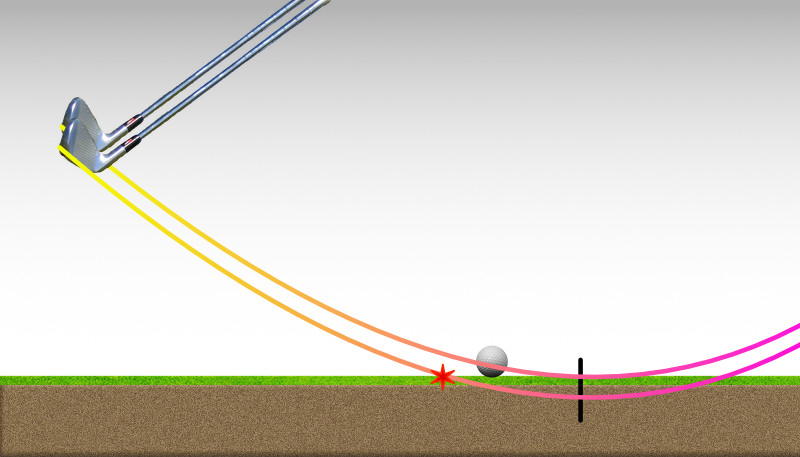 In the above scenario you could believe that you fall into the category of having the low point too far behind the ball, whereas the reality is you are just not controlling the height of your swing arc well.

as a very generalized rule,

It is a sign that your low point is behind the ball. However, it is best to see an instructor to help guide you with all of this.

If you want to learn more about low point control, including ways to train and improve it based on motor learning research, check out my video series, The Strike Plan. Click the image below to learn more.

Please bear in mind that the above info is simply the basics. There are many more factors involved, but this is a nice introduction to certain topics which many may have never thought of.

The above information is also relative – meaning that if a player were to make a similar motion (same release style, swing direction etc) it would produce the above results. From my experience, in a real world setting, it tends to hold true the vast majority of time.

My aim with this information is to help players and instructors to understand this area a little more, and be able to connect the dots between what happened and why a little better. I know that in my own game, this way of thinking really helped me to correct any issues and have more options available to me.

For the best result, work on your low point with the help of your qualified instructor, as they can see how this all fits into the bigger picture, and how to prescribe the correct fixes for your issues.