Golf and the Elastic Band Theory of Learning

Golf and the Elastic Band Theory of Learning

April 29, 2013 9:39 am Byadmin InUncategorized
2
In THIS ARTICLE HERE we looked at how learning can sometimes be a little wavy rather
than purely linear. Through practicing patience during the start of the
session, you can continue to push the boundaries further. One thing I have
noticed however, especially amongst more experienced players, is the ‘elastic
band theory’ (EBT) of learning. I don’t know if anyone coined this term before me,
so I apologize if I am stealing it.
The EBT
sees that even though we may have pushed our boundaries further with learning
what we desired to learn last time (whether that be a specific movement pattern
or skill), we often find ourselves in the same place as the last session, for
several sessions in a row. It’s not that we are not pushing the boundaries further
each time we train, it just seems that we are not retaining it.
As a practical
example, say a person is practicing to control where their divot is – They play a game where they hit 10 balls, and get a point
for each time the divot is in the correct position. Here is a table with their
points over the course of 5 sessions.
As a Graph,
it would look like this 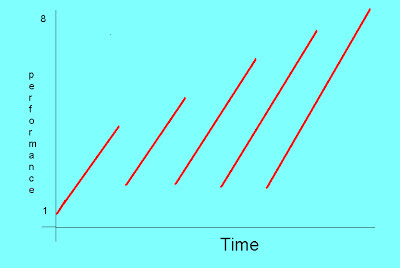 we see, with each subsequent practice session, we are able to push our performance further.
This is ‘stretching’ the line/elastic band
Now the
player is clearly learning something as they are pushing their upper limits
further each time, but it seems to not be sticking. One side of the spectrum is
going up, but the other end is staying static, just like an elastic band being
stretched. I have
stated that more experienced players seem to see this very often. There seems
to be neural pathways open for the old movement still, and although the player
is still creating a new neural network for the desired movement, it is not yet
running at full speed – even though the player’s ability to access it is
getting better with every session.
The good
news is, don’t worry. This happens to everyone at some point. Again, practicing
the art of patience is key here. With each ‘stretching’ of the elastic band, it
weakens that little bit more. Eventually you will stretch it so much that the
other end of the elastic band has no choice but to come with – looking like
this over a longer time; 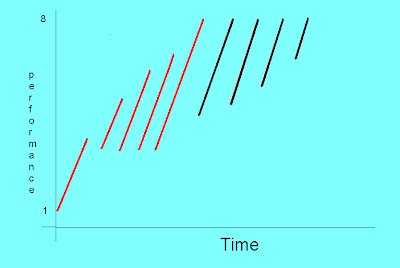 the black lines represent the tipping point – the elastic band has been stretched so far
that the lower end now comes up
Or, the
elastic band snaps completely and the old movement pattern separates from the
new (I love it when this happens). 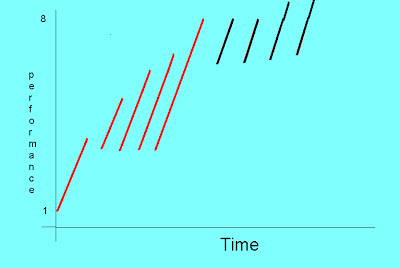 you can see the clear break between the red and black lines – this is where the ‘Snap’
occurred. From here, it can continue in similar fashion
Why did I
mention this topic if we can’t do much about it? Well, understanding that it
happens in itself is important, as it can bring your awareness to it when you
are in the midst of it happening to you. This
can lead you to say “Oh, yeah, I remember that article Adam wrote about
this. Damn, that guy knows his stuff”, (thank you). You would then continue your
practice with the patience of the Dalai Lama.
Also, if
you identify this happening to you, it is probably a sign that you should
switch to practicing the new move/skill with a more Random practice method to
improve your brain’s ability to access the new motor pattern, which I will
describe in a later article.