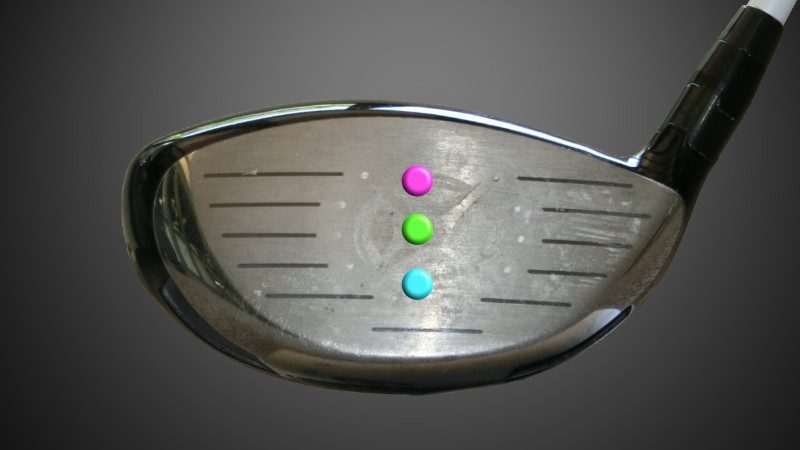 Amazingly – even with his body that isn’t as able as when he was in his 20’s, he was able to hit many bombs over 300 yards. With a decline in speed (which is very common as we age), how is he able to still keep up with the young guns?

For many years, maximizing distance was a mystery. Not anymore!

You see, now we know what creates distance. We know exactly what we have to do to get every last ounce out of our swing speed.

We can also measure these things – via technology such as Trackman, GC Quad and Flightscope, we can get precise data on the ball flight and club impact. Combine this with an understanding of how to change these ball-flight factors and we can add yards to pretty much anyone’s game.

There are 3 main factors that determine how far a ball flies in the air.

In general, a higher launch, lower spin and higher ball speed is going to result in more carry distance – all else being equal. 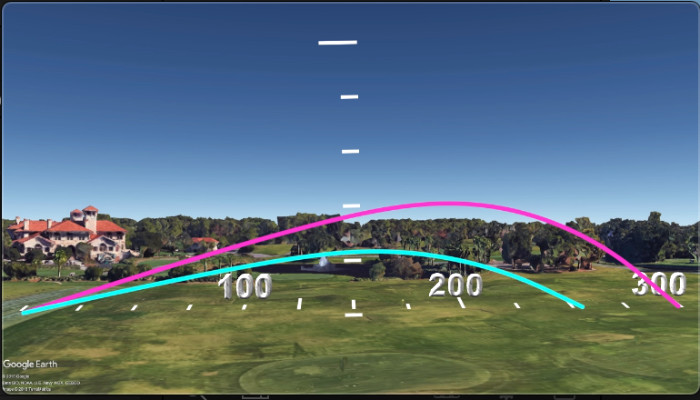 The higher launch and lower spin of the pink drive maximizes carry distance.

If I want to hit the ball up, I tee it a little higher, move it up in my stance maybe half a ball, and I’m really committed to staying behind the ball to send it.” (source – https://www.golfdigest.com/story/how-tiger-hits-a-bomb-when-he-needs-one?mbid=nl_102819_daily_tipoftheday)

This picture shows exactly what that does for Tiger 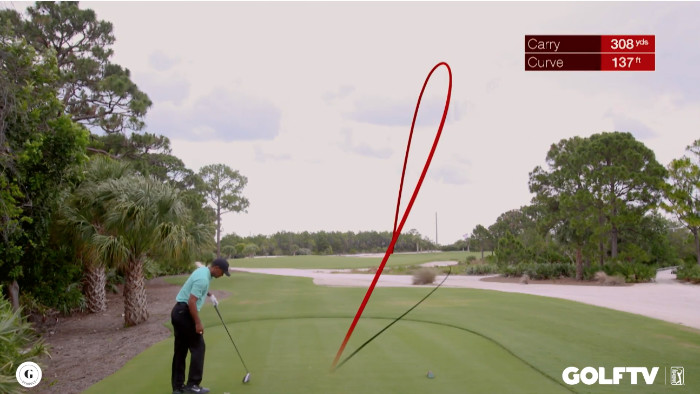 Let’s take a look at why Tiger’s advice works.

When Tiger mentions “moving it up in my stance” and “staying behind it”, he is referring to things which move the low point more behind the ball.

As a brief reminder of what the low point of a golf swing is – if you were to imagine the trajectory of the clubhead during the golf swing as a circle; 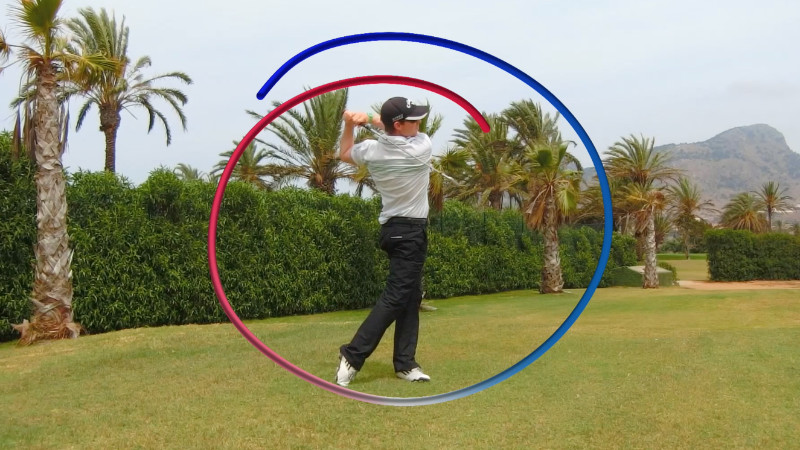 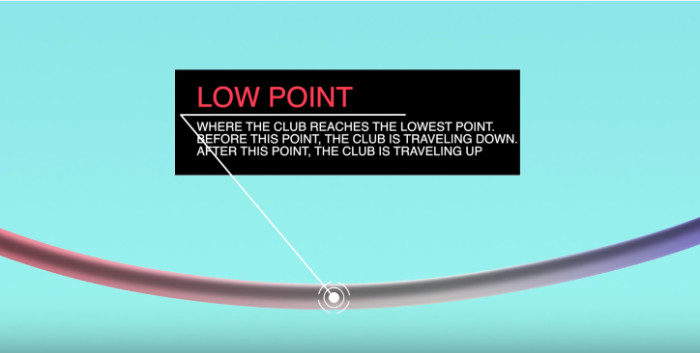 For maximum distance, a positive angle of attack allows us to get closer to (or achieve) the optimal launch and spin characteristics. 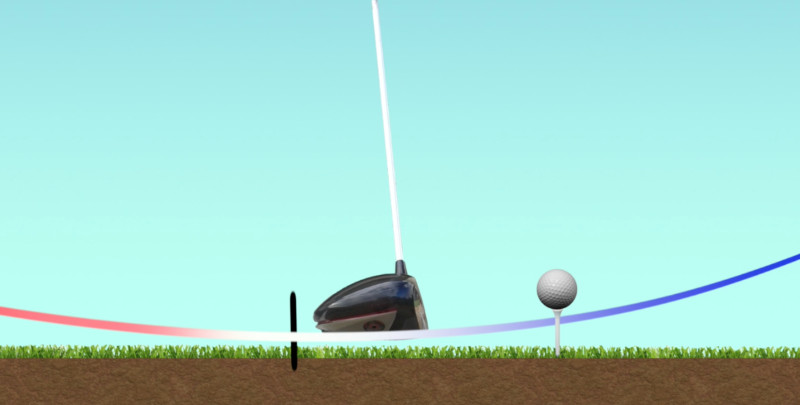 This shows the upward ascent into the ball, by getting the low-point (black vertical line) of the golf swing behind the ball

Tiger also mentions teeing the ball a little higher than normal. There are 2 main reason for this.

Firstly, if you are hitting the ball on the upward part of the swing arc (after the low point – as Tiger does), the club will be higher from the ground at this moment – see below pic

Note how the ball that is struck in the blue part of the arc (upward angle of attack) would need a higher tee to be struck from the sweet spot.

A normal tee height would result in a topped shot – or a strike which is low on the face (which kills distance), or the player would simply hit the ground early.

There is no way of hitting significantly up on the golf ball with a low tee without topping it, hitting low on the face, or hitting the ground early (red star).

Teeing the ball higher allows the clubhead and ball to be at the same height at impact.

The second reason for a higher tee height? There’s actually a “secret” place on the clubface that maximizes distance.

When we hit up on the golf ball, striking the face just above the sweet spot (as shown in the below picture) has the effect of 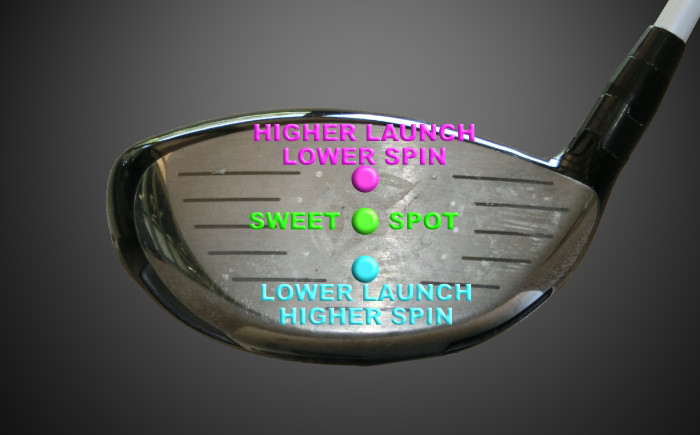 Teeing up higher is more likely to achieve this, and is actually a necessary addition to maximize distance if we hit with an upward angle of attack. Just look how high long-drive champion XXXXXXX tees it up here 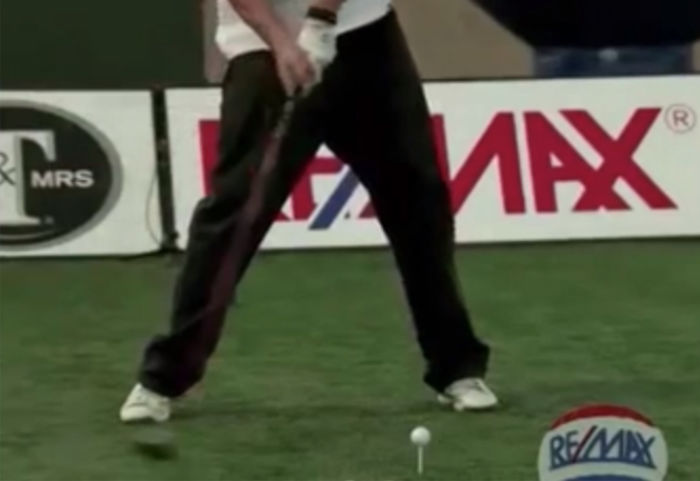 Just teeing the ball up on its own, or moving the ball up in your stance can be a recipe for disaster. We need to do both, together, if we are to see success with the Tiger method.

If you want to learn how to do this yourself, in The Strike Plan, I show you how to;

The Strike Plan is also dedicated to improving your iron game – getting rid of shanks and toe shots, and striking the ball/turf just like the pros.

Click the image link below to learn more about The Strike Plan.

If you already hit the ball far enough (yeah right) and/or suffer with slices/hooks, The Accuracy Plan is dedicated to straightening out your ball flight.

Improve your directional control, lose fewer balls in the trees, and learn to shape shots at-will – click the image link below to learn more about The Accuracy Plan