How to Hit Your 7 Iron 30 Yards Longer – INSTANTLY! 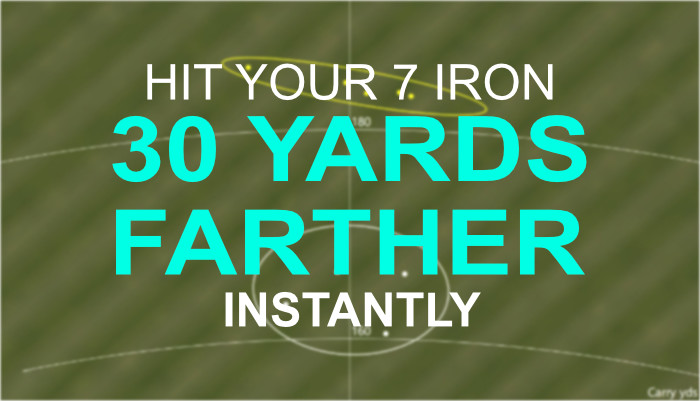 How to Hit Your 7 Iron 30 Yards Longer – INSTANTLY!

What is this? Clickbait?

Well, you could see it like that – the title is certainly capturing. But in this article, I am going to show you how I hit my 7 iron 30 yards longer without making a swing change, without changing my club, and without hitting the gym for 6 months. In fact, this took about 10 seconds.

I will warn you that the change made was not legal, but the message is very important for all golfers.

Below is a picture of the before and after numbers. I have also included the shot pattern overhead view, with yellow being Trial 2. 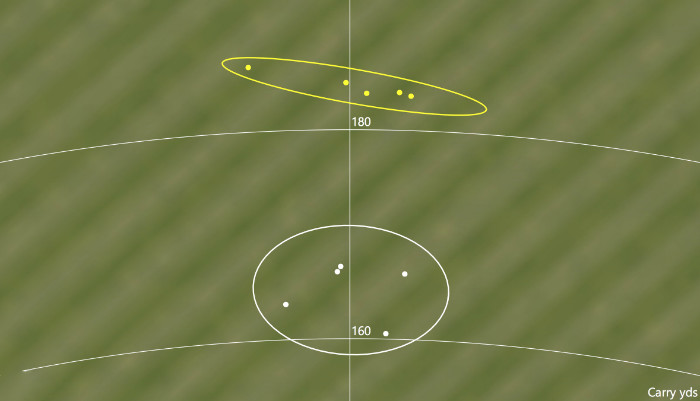 As you can see, in trial 1, my standard 7 iron shot carried 165 yards, and totalled 173 yards. In trial 2 (post change), we see an increase of 20 yards carry and 30 yards roll. This is in spite of path and face numbers being similar and strike quality being the same (smash factor). In fact, out of the shots that I hit, the longest shot with Trial 2 went a total of 213.1 yards – a full 40 yards longer than the longest in trial 1.

If you have a look, the spin rate of trial 2 is much lower (they are both relatively low spin rates due to them being hard range balls). Also, we can see the ball is launching higher, but reaching a lower peak height (due to the lack of spin). Why is this?

Recently, one of the pupils at our academy came in with new clubs.

he claimed. He wanted to test them on our trackman just to get his numbers again. Unfortunately, after about half hour of practicing, he came in quite frustrated.

I don’t understand it, they are going the same distance as my old clubs

After a bunch of questioning, we eventually got to the bottom of it. When he was originally testing the clubs, the salesperson made  him hit balls with the cellophane wrap still on the clubhead. I know that, when we reduce friction between the clubface and the ball, the ball will launch higher and spin will reduce – a recipe for massive distances. 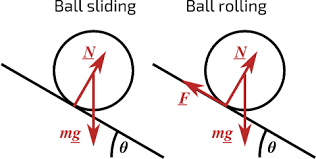 I demonstrated this to our pupil by putting face tape on the club and proceeded to show him the dramatic increase in distance – which prompted this post. Essentially, the difference between trial 1 and trial 2 is that I added face tape.

How Can I Use This?

I know you are probably disappointed and expected some kind of swing secret showing you how to crush the ball like the pros. However, this information is still valuable to you.

When testing clubs, make sure you get your distances checked without any foreign materials on the face. Try to use dry golf balls, take off the cellophane wrap, and don’t use face tape during the fitting process (or, at least, take it off to see the distances). 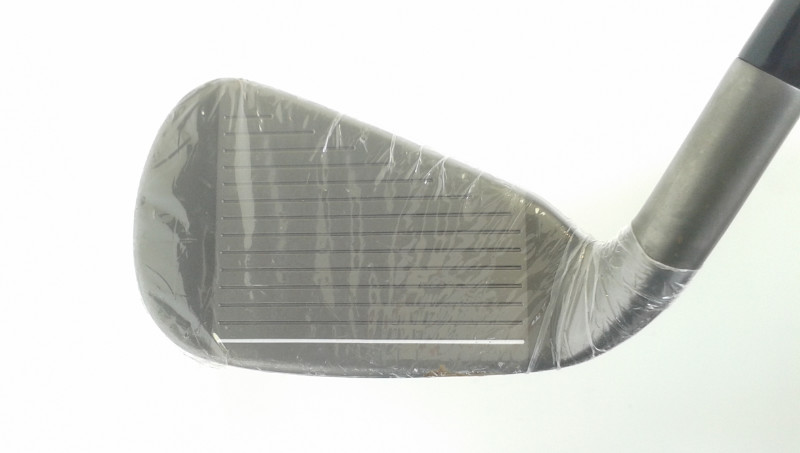 Face tape is bad, but this stuff reduces spin a hell of a lot

I am sure that the club-fitter was not being intentionally underhand when he sold this expensive set of irons to our pupil based on the huge distance improvement, but it is important for both club-fitters and buyers to be aware of this.

This is also an important thing to understand when we are playing golf.

When playing at Turnberry, I often landed in the semi rough (what… me miss a fairway?). When grass gets trapped between the clubface and the ball, a bit of water gets squeezed out – this lowers the friction between clubface and ball. As such, the ball would often launch much higher than I would be expecting, and have a “bullet through the wind” ball flight. I could immediately recognize it, and know that this high launch, low spin shot would not only carry much farther, but also run like a scalded cat when it hit the links turf.

We call it a Flyer. 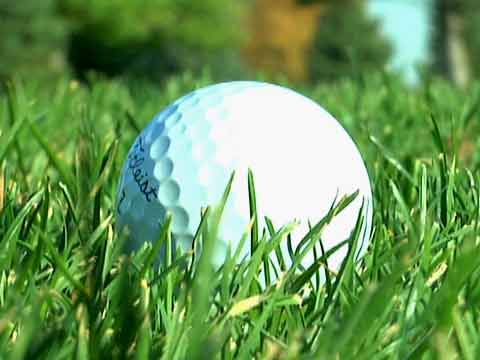 You may have heard this term while watching the pros on television. You might hear a commentator say “he has a flyer lie”, or watch a pro hit their shot, yell “get down” and see it pitch the back of the green.

As a result, a pro will often play for this effect – but it is pot luck as to whether it will happen or not (depending upon how much grass gets trapped between ball and clubface).

When I was a kid, I was very proud of my golf clubs. I would spend every Saturday night cleaning them (I didn’t have much of a social life). I remember one day using furniture polish on my clubs.

The next day, I was hitting the ball at least a club farther, and it would roll through the green with no stopping power. As a kid, this was quite fun (who doesn’t want to hit the ball farther?), but as a professional, it wouldn’t be of much use – we prefer to be able to know what distance we are going to hit.

However, with a driver, this can not only produce longer shots, but actually hit the ball straighter. The reduced friction will create less sidespin as well as less backspin – thus reducing curvature when the clubface and path are not matched. In a test by mygolfspy.com, they found an accuracy increase of 37% by applying “Noslice” to the face. 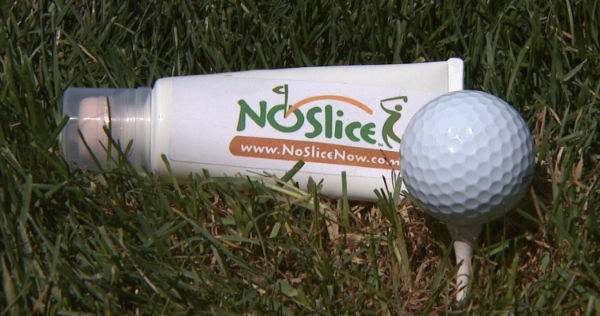 Now, it should be worth mentioning that this is not legal – applying foreign materials to the clubface is not allowed. But, if you just want a bit of fun for a practice round – go ahead. Straighter and longer…. why not!

This effect can sometimes be seen on days where a light rain has fallen. The water between ball and face reduces friction and produces the high launch – low spin combination.

This works in reverse too, which might be useful for approach shots to the green with our wedges.

By increasing friction, we can produce a lower launch with higher spin. One of the biggest differences between pros and amateurs is their quality of ball-turf contact, which increases the spin. Even low handicap amateurs often strike the grass a couple of inches behind the ball, reducing spin rate. Top pros are much more adept at really crisp strikes which trap minimal amount of grass between ball and face – producing the fabled low-spinner.

There is also another way to increase friction which is legal. Next time you have hit a bunker shot, leave the sand on the clubface. Sand acts just like sandpaper (duh), so the friction is greatly increased, and you can get a little more stopping power. 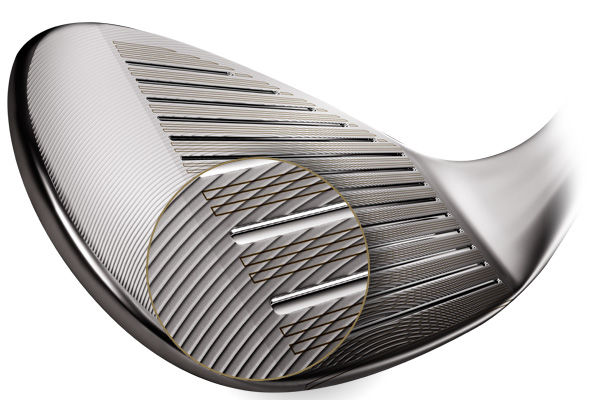 I remember finding a ‘grooving tool’ as a kid, and spent hours carving these huge grooves into an old sandwedge. While the grooves were cut so deep that the club became illegal, it was really fun hitting some shots which came out midget-killer height and ripped back off the green upon first contact. While this is taking it to the extreme, you could always get your old wedges regrooved (legally) or have the face sandblasted to increase the friction.

If you want to take your game to the next level, take a look at The Strike Plan. This is the most comprehensive video series to improve your strike – picking up distance, accuracy and consistency.