How to Increase Your Angle of Attack 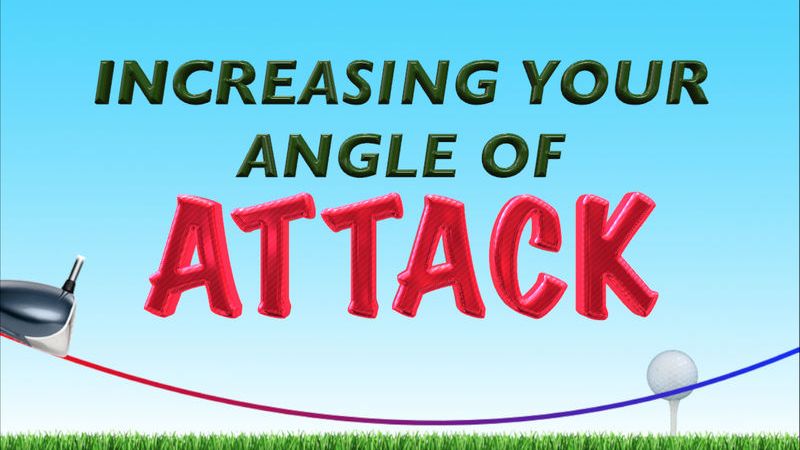 How to Increase Your Angle of Attack

If you want to find out how to hit the ball farther than ever, listen up!

I’ve posted several articles about driving the ball more effectively, some of which are linked at the bottom of this post. In this article, I will explain some concepts regarding increasing your angle of attack, or AOA.

Angle of attack, or AOA refers to whether your club is traveling more up or down when it makes contact with the ball. Changing your AOA can affect strike quality (it’s vital with shots from the ground) and distance. With shots on the ground, we generally want to be hitting slightly downwards – this is achieved by having the low point (Click here for an article detailing this) of the swing arc in front of the ball.

However, with a driver (as it is teed up), we have more options available to us. We can even hit up on the ball – a positive AOA.

The benefits of a positive AOA can be huge. In my own game, it allowed me to hit the ball much farther than before, and gave me the ability to compete with player’s much stronger than me. This is because a positive AOA allows you to launch the ball much higher, combine this with a lower spin rate (law of diminishing returns applies), and you have a recipe for some serious distance. 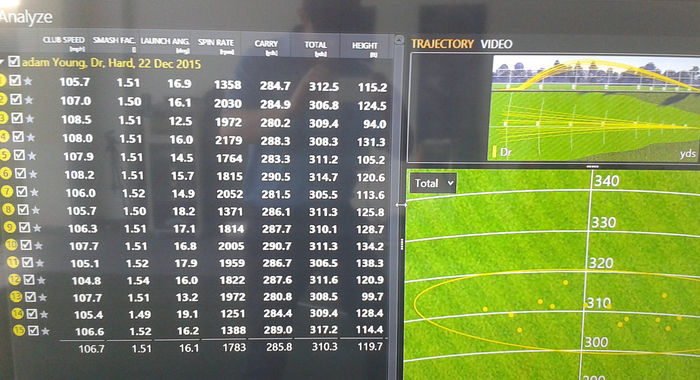 These drives averaged 310 yards with just 107mph swing speed. This is because the

The jury is still out as to whether this will make you a better player – some say hitting up on the ball more will make you a wilder driver. However, with the bulk of statistics showing the benefit of increasing distance to your handicap, I think it can be worth the gamble. It never hurt my driving, and I have seen it make many golfers better. I will say it is not for everyone, and I have tried it with some players and we have decided that it is maybe not the best option for them (short term)

How do we increase AOA?

First, we have to look briefly at how AOA relates to the swing arc.

In the above picture, we have 3 possible ball positions (relative to the swing arc). The first ball (to the left on the screen) is being hit early in the swing arc – the red part, where the AOA is steeper (more downwards). Also, relatively, dynamic loft would be lower here – all resulting in a lower launch angle for the ball.

The second ball is being hit at low point – where the AOA is neutral.

The third ball, in the blue part of the swing arc, is being hit on the upswing – a positive AOA which benefits launch angle. So, in order to get the AOA more positive, we have to find a way of getting the lowest point of the swing circle further behind the golf ball.

What most amateurs do

The majority of amateurs hit their driver very much like their iron shots – on the downswing. Often it looks something like this.

Their club is traveling downwards at point of contact with the ball. Usually, they hit the ball and then their club thumps into the ground after the shot. I can usually tell if someone has a steep AOA just by looking at the underside of their driver. If the paintwork is taken off the club, or it looks overly scratched – it is a sign of a steep AOA.

Having the low point too far in front of the ball is often due to a poor set up, or certain body positions in the swing also contribute to it. Having a swing direction which is overly leftwards can be a big factor.

Before you change the low point of your swing and start trying to hit up on the ball, we must understand that we first have to tee the ball higher than normal. This is because, as the club is hitting the ball and traveling up, it is in a part of the swing arc which is higher up than low-point. If that sounds complicated, just look at the pic below.

Most amateurs who have tried to hit more up on the ball have failed because they try to maintain the same tee height as before. The club then has no chance to catch the ball on the upswing, as the ground is in the way.

With the ball teed too low, hitting on the upswing becomes an impossibility. We call this a drop-kick

How to get the low point back

Let’s look at some of the main ways we can achieve this.

Basically, anything that gets your head more behind the ball at impact will tend to help you hit more on the upswing. 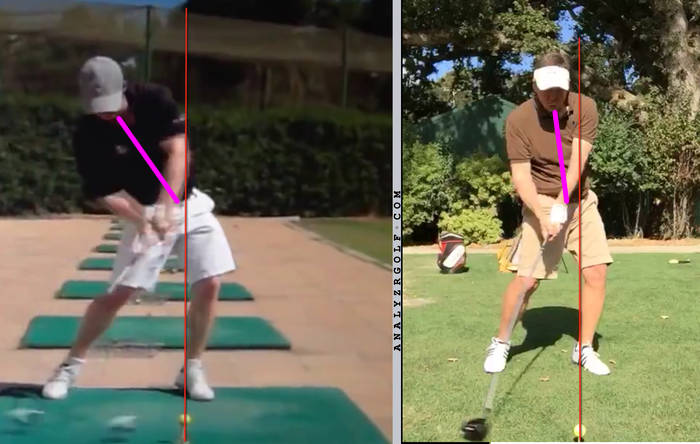 You can see at impact just how far my head and left shoulder are behind the ball line at impact compared to the amateur on the right. The pink line is a 2D representation of spine tilt (not an accurate 3D measurement).

One of the major influencers of low point position is the swing direction. In short (I will explain this in future articles)

Many amateurs who struggle with a slice will start to swing left to compensate (or create a slice which at least lands on their target  now). This can put the low point way ahead of the ball, dramatically steepening AOA.

Often when amateurs put the ball farther forwards in their stance, the inadvertently open the shoulders up more to the left. This can create a weaker grip position and encourage a swing direction which is more leftwards. I have seen good success in squaring someone’s shoulders (or even feeling more closed at address) – putting the low point automatically farther back, closing the face to path relationship and increasing AOA.

If you look at my picture above, you will notice my left arm is bent at impact.

It’s actually a perfectly fine move to have – and while I spent many years actively trying to get rid of that, I now understand things better and know that it serves a purpose (oh the time I wasted!).

Basically, by getting out hands to be moving more upwards through impact, we can start to change the shape of the swing arc at the bottom – and also increase the AOA more. 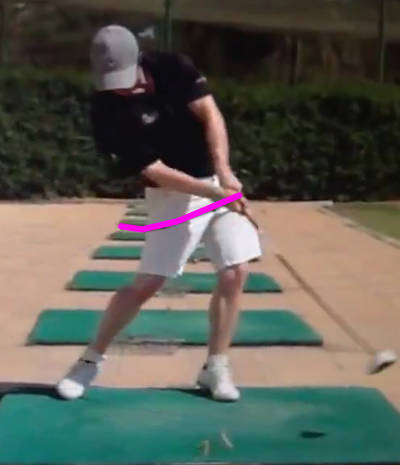 The pink line represents the path my hands took through impact

Bending the left arm though impact can help to facilitate this upward hand path. You don’t have to do it, but there are several pros who do it, including one of the world’s longest drivers (Jamie Sadlowski – bottom left picture).

Other moves which help this hand path could anything which gets the left shoulder to move up and away from the ball more dramatically though the strike, such as;

I wrote more about these moves in my article on Parametric acceleration.

That’s all well and good, but what drills can you go out and practice today that will help you? Well, here are a few drills I use – my favourite being the last two.

Adding some constraints to the environment can help you figure things out instinctively, and can give some quality feeback as to whether you are doing it or not. 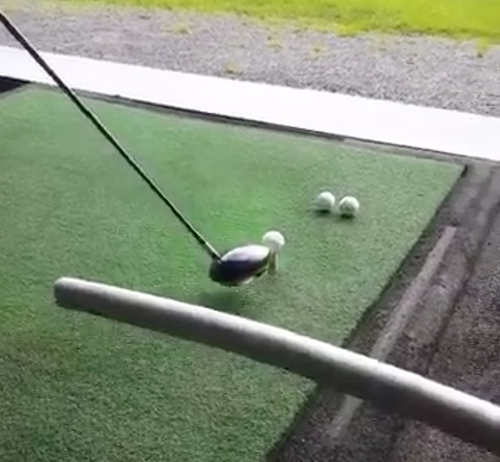 Thomas Devine from www.tdgolfcoach.com shared this video via twitter recently. The aim is to hit the ball while avoiding the two balls in front (making sure the club is raising through impact). Thomas also set up a noodle behind the club to make sure the player gets the swing arc low enough pre-impact.

Andrew Rice of www.Andrewricegolf.com made a nice video of a similar drill.

As a small change to the two above drills, my preferred method is to set a task for the player involving setting 3 tees up. The middle tee has the ball on it, and there are another two tees without a ball – one in front and one behind. These ‘extra tees’ are placed a little lower into the ground – as shown.

The aim of the task is to take the first two tees out of the ground, but leave the ‘target-side’ tee in the ground. Doing this will not only get the club moving upwards through impact, but it will also ensure that you hit the right height on the clubface (stopping you cheating and just thinning the ball).

A positive AOA with a well controlled swing arc height will see the first two tees stuck, but the last tee is left alone.

This is a good drill because there is no way of cheating it. Also, you can practice the drill in you back garden or garage without a ball – great practice for the winter months when you are locked inside.

Make sure to visualize the path that you want the club to take through impact – see it before you do it.

I like to work with concepts. I think that (and my teaching experience suggests) if the player can really visualize what they are trying to do, their body will figure out a way to do it. In fact, all of the body positions I talked about during the first part of the article are things I never personally thought of – they Self-Organised as a result of me thinking of this concept below. 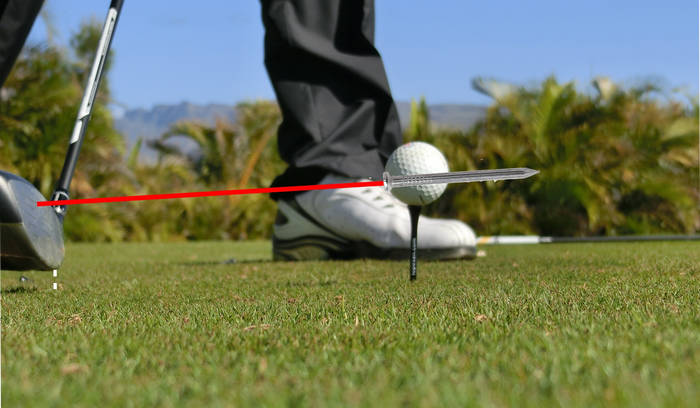 Using all of the above, you can start to get your low point behind the ball, allowing you to hit up on the ball more. This can offer the potential of increased distance, as with a higher launch, we can achieve a better launch and spin combo (around 16-18 degrees with minimal spin is great for most people).

The caveat here is that this is not going to be optimal for everyone. I present this here as an option – one which the longest drivers in the world use, and one which helped me increase my yardage dramatically. However, for many people, the flexibility required to get in the positions at impact, as well as the difficulty of going between the two extremes of hitting up on a driver and down with an iron (club moving down, not hands) can render this idea too difficult for most.

However, for me now, changing from the extremes of an +8 AOA with a driver to a -5 AOA with a 7 iron is as instinctive as taking a different set up with a putter than a wedge. It’s now automatic.

If you want to learn more about impact concepts as well as revolutionary training ideas for better strikes, check out The Strike Plan by clicking the link below.