How to stop Shanking 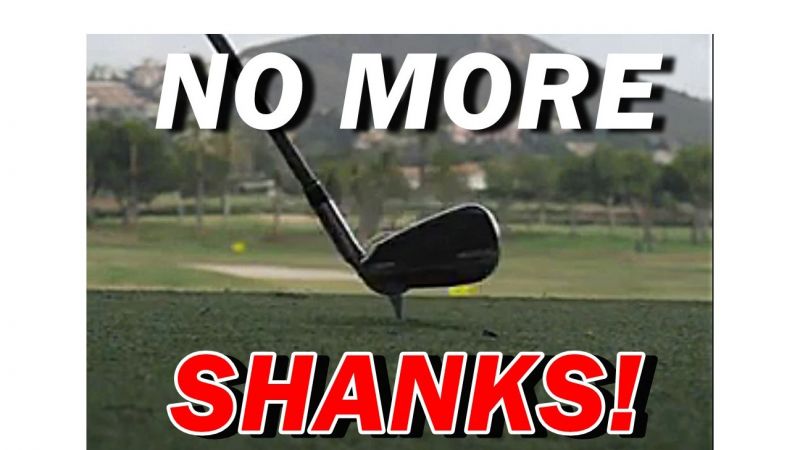 How to stop Shanking

I don’t care if you are frightened of the word. I’m not going to pussy foot around and call it ‘the dreaded S word’. Man up! It’s a shank.

If you’re too scared to even mention the unmentionable, it is very likely that you suffer with them. Well, let’s have a little look at the issue.

What shankers think they do

I’ve done enough lessons to be called an expert (10,000 hour rule), and I have inevitably come across a lot of shankers. I’ve noticed something consistent across the board with them. This is what they think their typically strike patterns look like 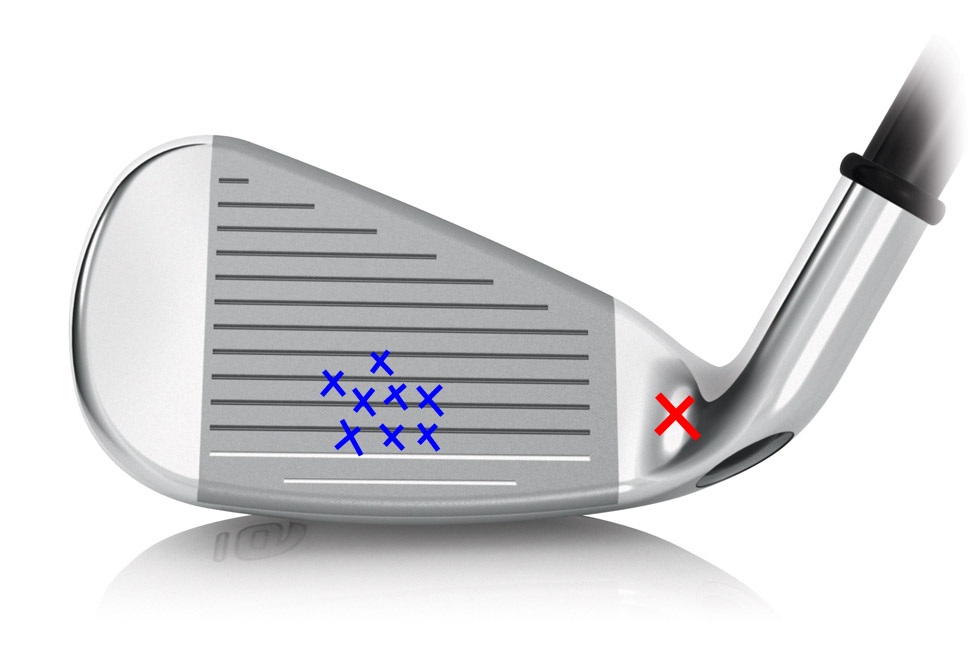 They believe that they hit 8 or 9 out of 10 shots flush from the sweet spot, and then out of nowhere, in pops a shank (red).

Well, upon further inspection this is almost always the case. Their shot/strike patterns look more like this. 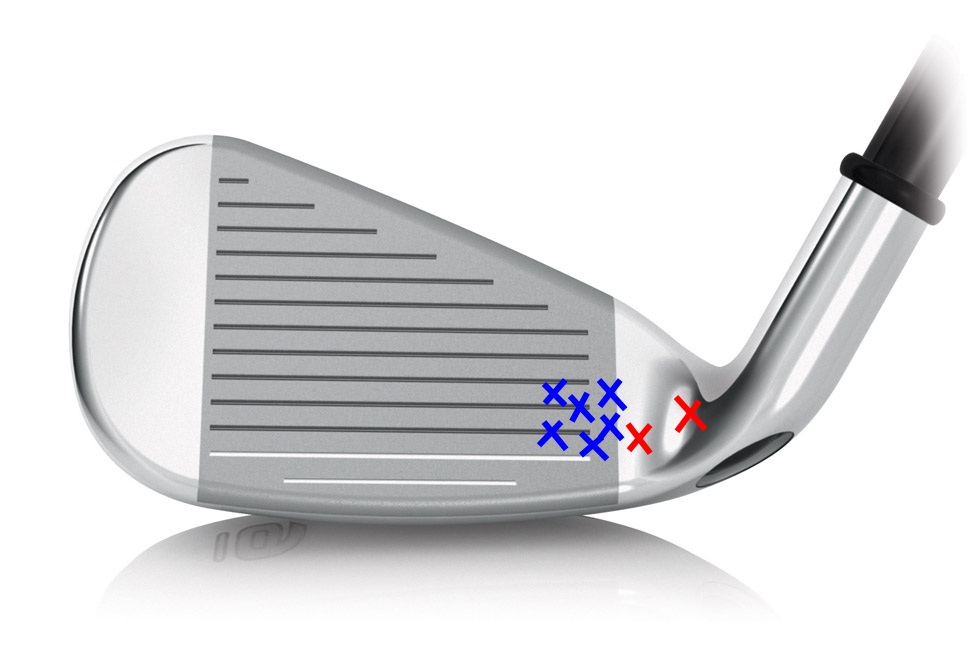 Patterns of shankers more commonly look like the above – where the blue strikes are actually quite successful (especially with modern day forgiving clubs), but they occasionally get a couple of red ones which make them pay attention.

Of course, this person believes they are incredibly inconsistent, because the result is inconsistent. But the fact is, they are doing the same poor things consistently. The answer is not to fix the 1/10 ‘random’ shank, the answer is to shift the whole pattern more towards the toe side.

This doesn’t mean every shot is going to be a toe, but that the pattern is moved in that direction to eliminate the shank. 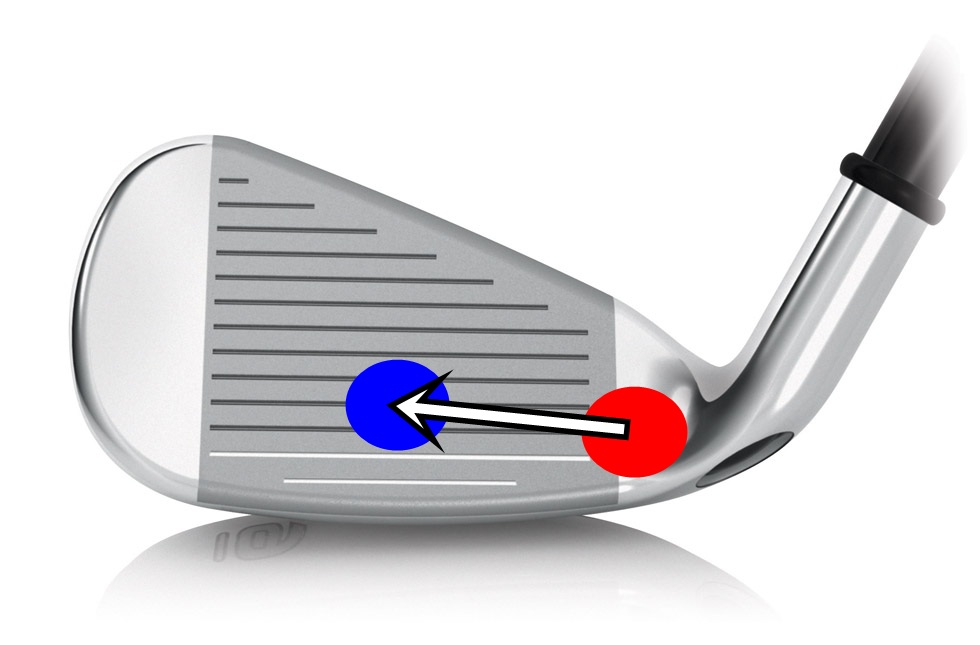 Take the red pattern and shift it in the direction of the toe, until you get a desired strike

There are many technical ways to fix a shank – many of which I discuss in incredible detail in The Strike Plan.

However, let’s have a look at the skill-building route. This skill is;

You CAN do this

Sometimes I hear some bulls#%t about how people can’t change their strike pattern because of a technical flaw. But I guarantee you already possess the ability to shift your strike pattern more toe-wards.

That’s right, everyone possesses this ability, but they cloud it by trying to find mythical magical answers in the backswing. How do I know this?

Set up to a ball, swing back and miss the ball completely, brushing the grass on the inside of the ball (blue area). 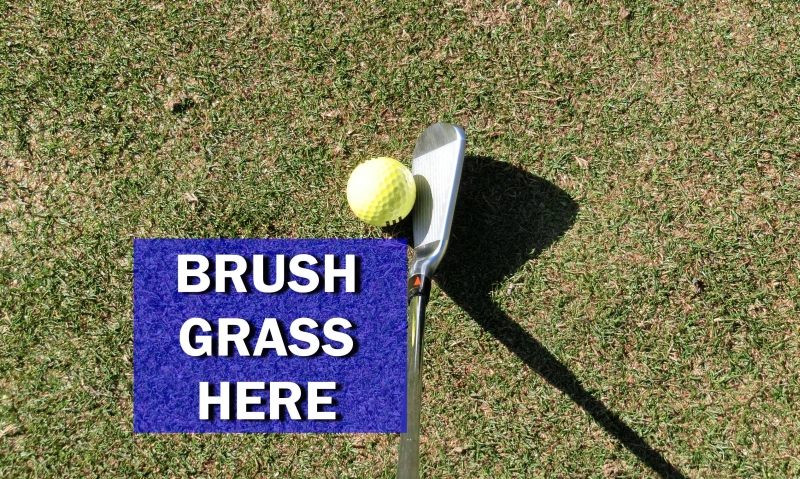 You just did an EXTREME toe shot. Soo now you have no excuses – if you can hit the most extreme toe shot (so extreme that you miss the ball completely), you have the ability to shift your normal pattern a bit more toe biased.

I have NEVER had someone who cannot do this – this shows me that anyone has the ability to shift the pattern more toe biased.

Now the question lies in how much of that feeling should you use when you get to the ball? That is for you to decide and experiment with.

Draw a line down the heel 1/3 of your clubface as shown. Draw a dot on the ball. Place the ball on the ground. Now hit 10 shots, getting a point for each mark you get on the grooved area of the face toe-side of the line. 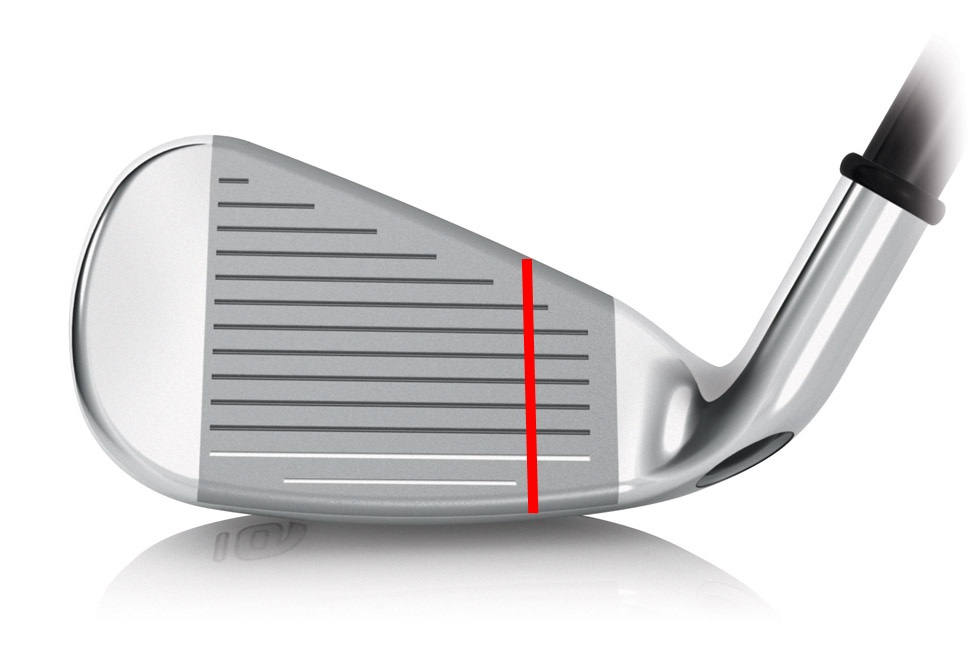 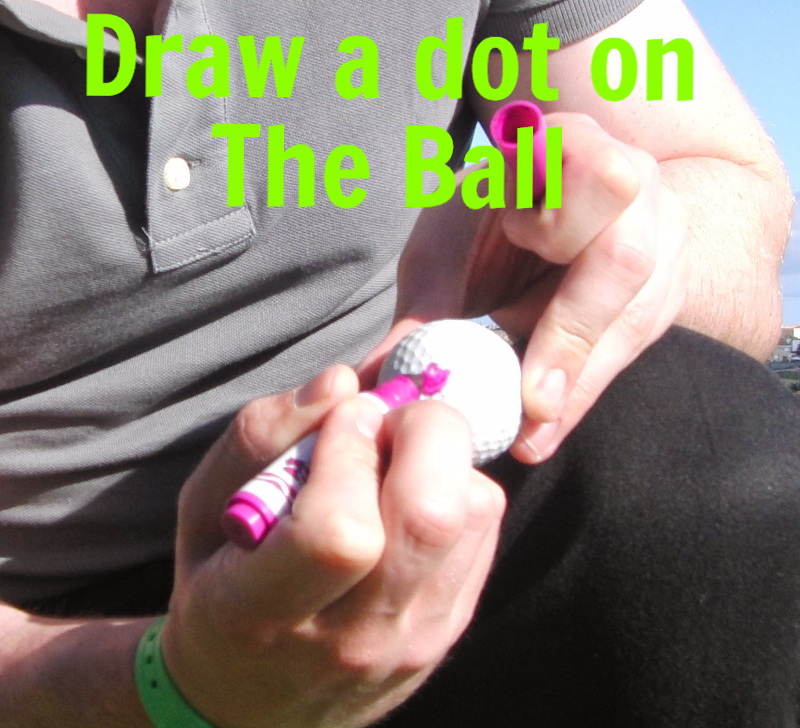 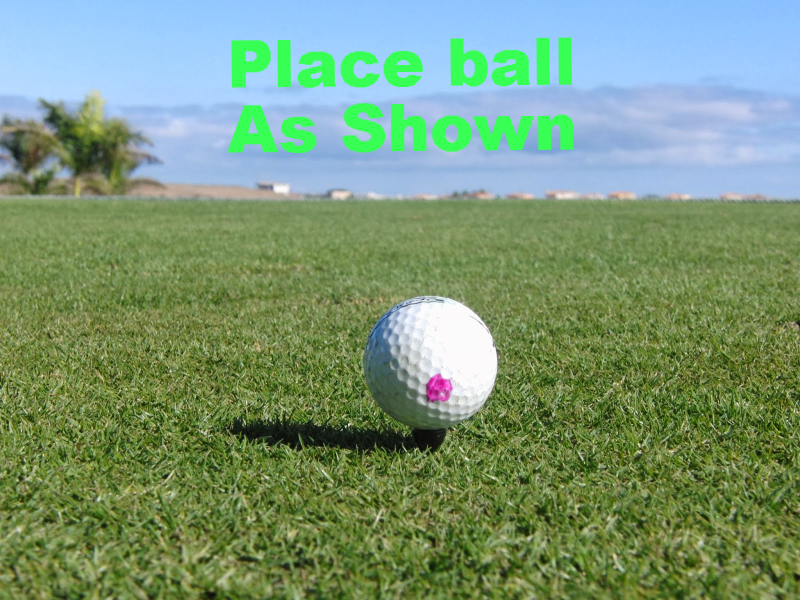 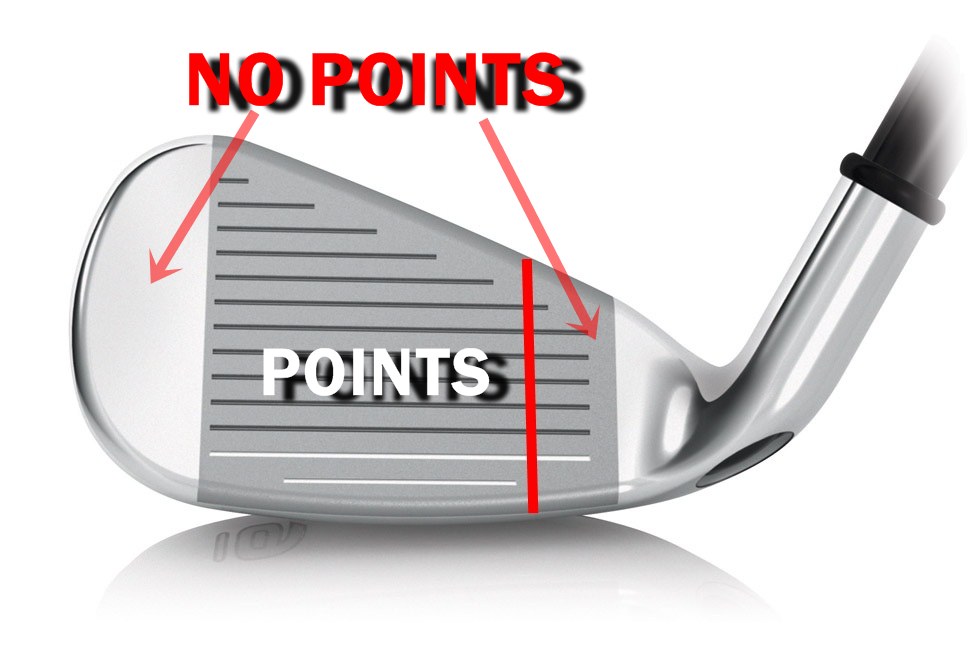 If you are not getting any points at all, break the swing into a smaller, more manageable chunk (a chipping or pitching swing) and gradually add speed as your success rate goes up. If this is too easy, add a toe side line, and get points if you strike between the two.

You can NEVER get too good and basic fundamentals such as strike on the face. And no one I see is good enough at these – so get practicing.

Put another ball on the toe side of the clubface, as shown, with just enough room to get the clubhead on the ball, blocking off any heel hits. Now hit balls trying to strike the inside ball alone. Avoid hitting the outside ball. 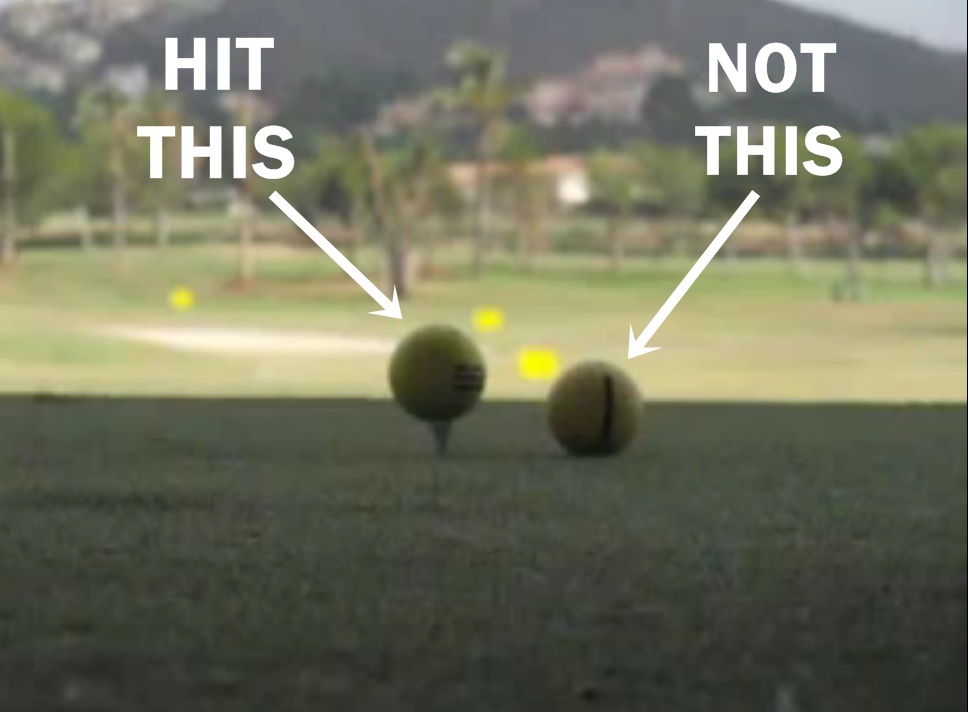 Still can’t do it? I’m going to be harsh here and give you a reality check- you are not trying hard enough. How do I know? Because in people who can’t do it, I often replace the outside ball with my finger and force them to swing.

Out of the hundreds of people I have done this with, I have only had one guy who would have hit my finger. Luckily, I always move my finger in the downswing – what, do you think I’m stupid? But it just goes to show that often, the thing stopping us change is ourselves.

Push yourself into uncomfortable boundaries – that’s where change lies.

Understand that you have a heel biased pattern ingrained – we call that an attractor state. Doing the above drills will gradually shift that attractor state more toe biased, and hopefully centralized over the sweetspot. But you have to keep monitoring it.

Modern day clubs are so forgiving that we can hit really close to a shank and it still feels ok. This can then quickly become ingrained and lead to a heel biased pattern.

My advice? Even if you are striking it well, do occasional checks of your strike pattern using the marker pen drill.

If you want to learn more ways of getting rid of shanks, as well as diving more into the technical elements – check out The Strike Plan by clicking the image below. This HD video series also covers how to get better at ground contact to eliminate fat and thin strikes – improving your distance control, consistency and total distance, as well as improving spin and accuracy.

This article showed some basic examples of

To find out more about these concepts and more, they are detailed in my book “The Practice Manual – the Ultimate Guide for Golfers” – available on amazon by clicking the link below

Don’t forget to check out my free Ebook “Golf Hacks” and join the thousands of golfers who have dropped shots with simple advice. 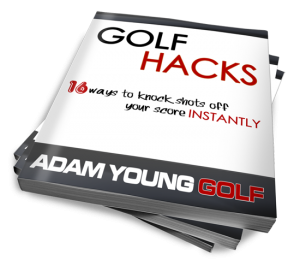