Ideomotor Effect in Golf – The Power of Visualization 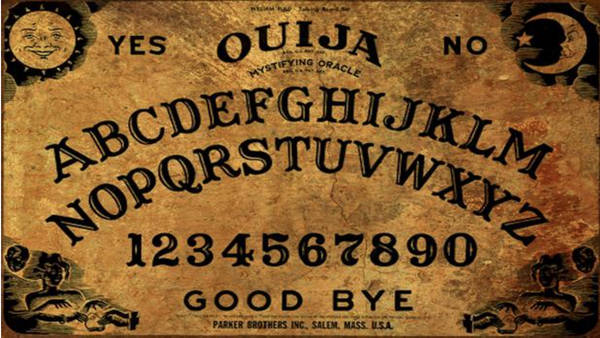 Ideomotor Effect in Golf – The Power of Visualization

Have you ever seen or used a Ouija board? This is the board that allows you to ‘contact the dead’ through moving a glass, or some other device over a board with numbers, letters and yes/no written on it.

Everyone in the group places their hand on the device, and through asking questions to spirits, they reply by moving the device to the corresponding place on the board, spelling out answers for the participants. People who have successfully used a Ouija board will swear that they were not applying any force to move the device, and that it was the spirits themselves who were creating the energy.

The problem with this is that it is a load of rubbish.

Studies show time and time again that it is false, and that the people collectively are moving the device over the board to the place they want it to go. In some studies, sensors have been placed on the devices to measure pressure from the fingertips of the participants. Although they all swear (and often truly believe themselves) that they are not applying any force, the pressure sensors consistently show that they, in fact, are.

Other studies have blindfolded participants, then sneakily turned the board 180 degrees, then asked them to carry it out again. Predictably, the device moves across the board to the place where participants ‘think’ the answer is, based on where it was before.

Probably the most elaborate debunkings of a Ouija board was produced by Derren Brown. He collected a large group of intelligent, suggestible people, and took them to a creepy old building. He showed them pictures, gave stories and spent the night discussing a woman who had supposedly died; their goal was to channel her spirit through the Ouija board.

Low and behold, her spirit was successfully contacted, and she supplied lots of interesting answers. Every one of the participants were fully convinced that they had actually contacted her spirit, as they felt the device moving on its own, without and conscious manipulation from the participants.

At the end of the show, Derren thanks all the participants, before bringing out a lady for them to meet. Low and behold, it was the lady that they had supposedly contacted – she was not dead at all, but was sitting in the other room watching TV. The participants cannot believe it. 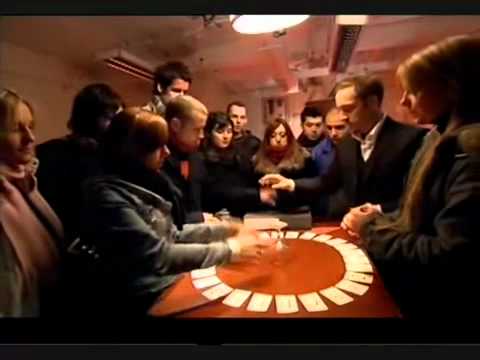 After they ‘contacted’ her spirit, Derren introduced them all to her. Alive.

How did that happen?

So, what is really going on here? Why do people feel like they are not applying any force to the device, yet it moves seemingly on its own? There is a known (and tested) psychophysiological concept called ‘Ideomotor effect’.

Any conscious or unconscious thought will activate (light up) certain neurons in the brain. If I said the words ‘Coca Cola’ to you, your brain lights up like a Christmas tree, as you have specific neurons attached to those words. Unless you were born and raised in the jungle, you will instantly visualize red and white and black, and may even conjure up images of a Truck/Lorry driving through the snow with the song ‘holidays are coming’ ringing through your mind. This will be automatic and out of your control – the brain is a mass interconnected web of neurons connected through associations ingrained through emotion and repetition.

Marketers know how to use this knowledge to their advantage. 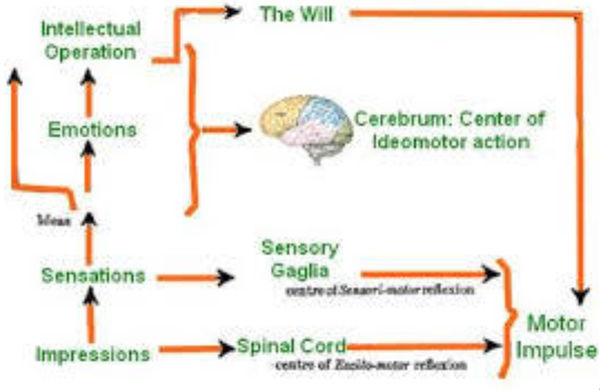 The same thing applies to a movement; imagine lifting your right arm up, and your brain will ‘light up’ for that movement pattern. Neuroscientists can tell what movement you are thinking of through purely looking at which parts of your brain are activated; this is known as neuron/brain mapping. In fact, they will be able to tell you what you are thinking of even before you are thinking of it (this is crazy stuff and opens up a plethora of philosophical debates over consciousness and ‘the self’, specifically ‘free will’). The activated brain/neuron network will then send an electrical signal to your muscles – this part is not in your control. Simply by reading the words ‘lift your right arm up’, you have just sent an electrical signal to your right arm muscles. 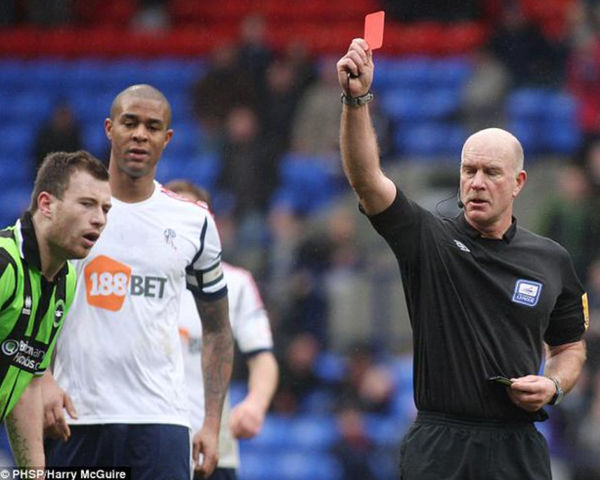 The ideomotor effect was costly in this game

Now, whether we actually lift our right arm up involves other mechanisms, which I won’t discuss here. However, regardless of whether or not the full movement actually takes place, there will often be very small, almost unnoticeable, movements in the arm; this is called the ‘Ideomotor effect’. For some, this is very strong. For others, this can be rather weak. But as humans, we all have it to some extent.

Through amplifying this effect, we can experience certain things. Such as the Ouija board users – by having 6 people put their fingertips on the device, we can multiply ideomotor effect 6 times. Ideomotor effect is normally unnoticeable, but by having the momentum of 6 people, it can be rather powerful. Each individual person will truly believe they are not moving the device; the reality is that they are just not aware of the force they are applying. 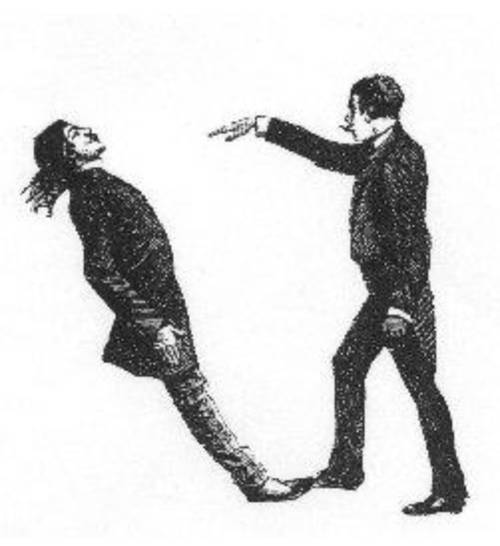 Stage hypnotists can knock some people over without touching them, purely through the power of suggestion and Ideomotor effect

Both overly relaxed states and overly emotional states (anything that interferes with the conscious mind) can amplify ideomotor effect. Hypnotists use the relaxed state, plus highly suggestible people, to make their skits work. Derren Brown used a lot of ‘scare tactics’ in his show to produce a more elevated effect. This may be similar to golf in that, if we are too nervous or too relaxed (i.e. not concentrating enough) we could produce faulty movement patterns should we start thinking of/focusing on the wrong things.

Get a long piece of string, or necklace. Attach a set of keys to it, or something heavy, to make it into a pendulum. Now stand up, hold the pendulum at eye height and close your eyes for a moment. Visualize the pendulum moving back and forth, over and over. After about 20 – 30 seconds, when you have a clear image in your head, open your eyes.

This works better with some people than others, and is better with a longer pendulum and better visualization. But you will feel as if you didn’t move it intentionally. Yet, the results show for themselves.

I know I have gone off on another wild tangent, but now comes the ‘golf relatable’ part. This really comes down to your focus, attention and concentration on the golf course.

Imagine you stand on the tee and are saying to yourself ‘Don’t go left’. Your brain is now activating the neurons relating to a left shot, which sends the signal to your muscles to produce that left shot. Ever seen the slicer who only ever hits a pull shot when there is water on the left? Even if you don’t hit the left shot, your brain will be sending inconsistent messages to your muscles, resulting in a poor shot either way. 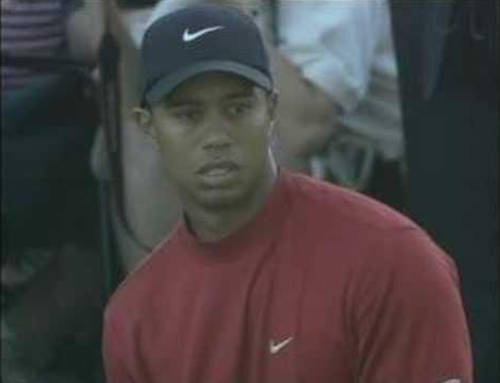 Tiger, visualising the chip in at the 16th, Augusta

So, during your golf routine, the very last thing you should do before you walk into the ball is to direct your mind to what you DO want the ball to do. Use words such as “Split the fairway”, “Solid Strike” or “Nail the green” over and over; make sure the words you use are positive and reflect your goal.

Close your eyes, imagine the ball flying through the air and landing onto the part of the green you want, or splitting the fairway. Try to visualize only your target, imagine everything else around it as non-existent – such as a green floating in space with nothing around it. When you have a clear image of this, open your eyes, make a confident practice swing and walk into the ball and hit it.

Try not to ‘over think’ at the ball, just let it happen. Input the appropriate image during the pre shot routine, and let it automatically come out over the ball. Use a FLOWING ROUTINE to let your visualizations come out more automatically. This encompasses the visual, verbal and feel side of the brain programming.

I know we all have been told to visualize positive things over the ball, and try to imagine a good shot. But how many of us actually take the time to truly commit to this process.

Hopefully, through a full explanation of one of the mechanisms involves, I have further convinced you that visualization is a process you should get better at. Through an appropriate pre-shot routine, you will be much more likely to access the correct neurons in the brain, hence sending the correct signal to the muscles to produce the desired movement pattern.