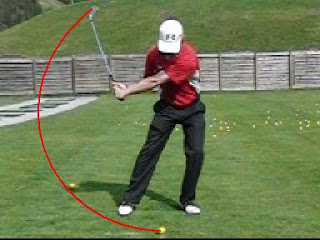 Want to learn how to strike the golf ball like a pro? Read on.

This article is not about the worst moment you have ever had on the course; it is about controlling one of the key elements relating to crisp and pure strikes. This week, I will discuss an important element relating to your performance in golf, and then give example of how to improve it using a skill based approach.

Playing a round with my buddy from my junior golf days, we were discussing the topic of strike.

He was a little out of practice, and suffering with some thin and fat shots that day (as I was too). Upon further discussion, I realized that he didn’t have a really clear concept of what he was trying to achieve with the club at impact.

This guy was a pretty decent player (12 handicap), so obviously had the ability to strike the golf ball, yet without a clear concept, he must have been doing the correct things more accidentally than intentionally. 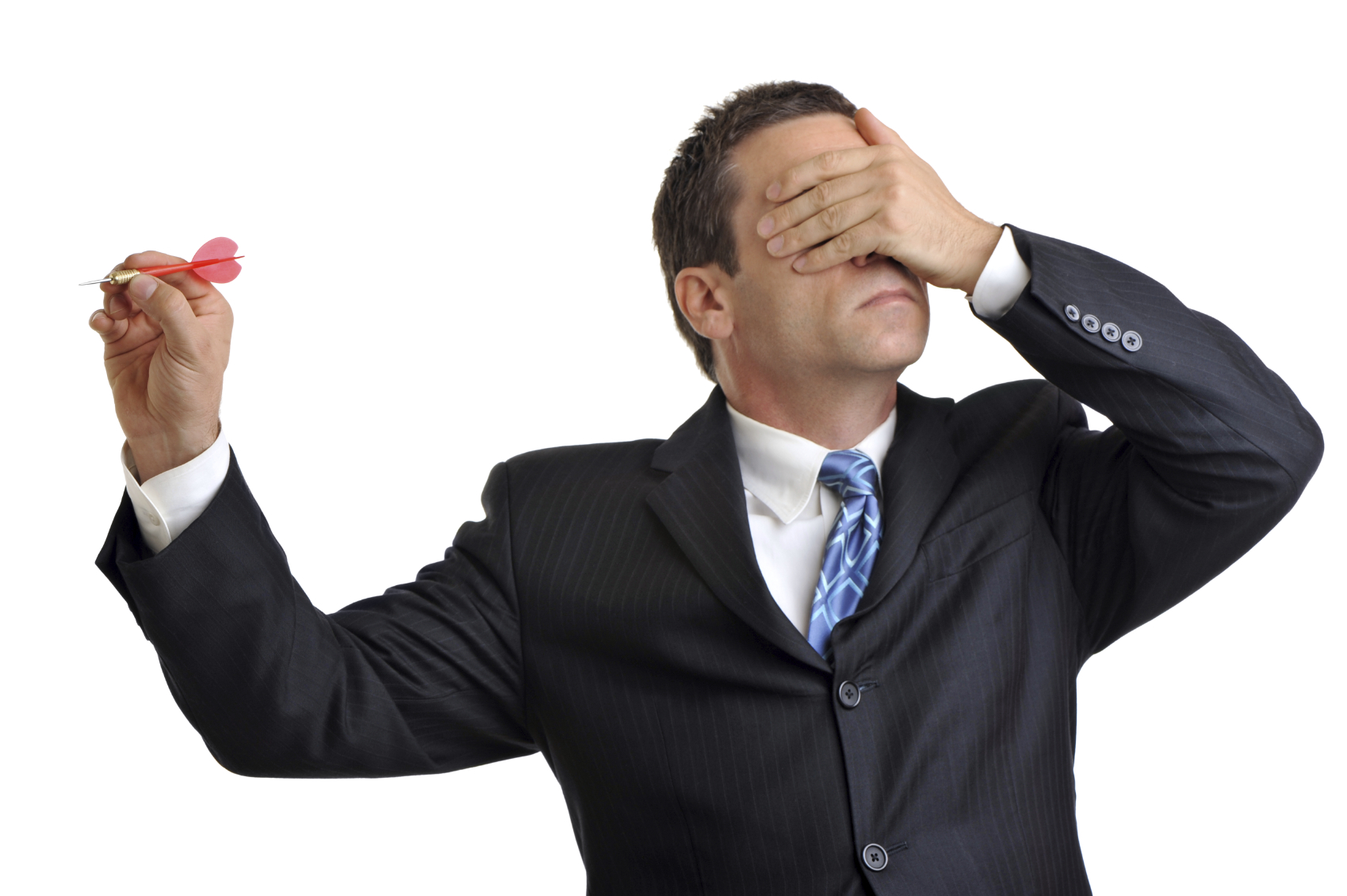 Sometimes a blind darts player can hit the board, but without knowing what to do, we are at a loss to fix it when it goes wrong.

This is true of many better players; the subconscious mind can even override incorrect conscious concepts to produce the correct things, given enough practice. But, I feel things can be achieved quicker if the ‘what to do’ part is clearly defined, even if the ‘how to do it’ is more open to interpretation.

So, what must we do in order to strike the ball correctly and eliminate fat and thin shots?

Top players have few things in common with one another, but a consistent theme amongst all tour professionals is their ability to control the low point of their golf swing.

If you are to imagine the swing as the golf club being projected in a circle around your body (although this is not an accurate representation of what happens, for purposes of simplicity, this will suffice), the lowest point of that circle needs to be controlled in both 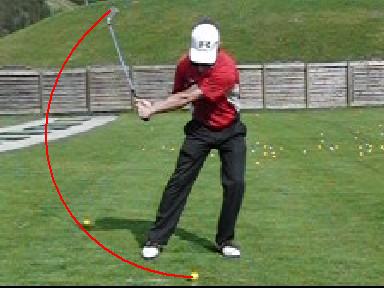 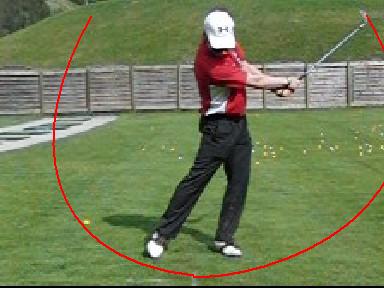 The best players in the world have the lowest point of their swings in front of the ball. This means that their divots will tend to start on the line where the ball rests, and continue further forwards on the target side of the ball.

The lowest point of the swing (deepest part / middle of the divot) can be as much as 4 inches or more in front of where the balls rests. This means that the club head is travelling downwards as it hits the ball, then enters the ground, creates the deepest part of the divot around 4 inches forwards of the ball before ascending out of the ground and into the follow through. 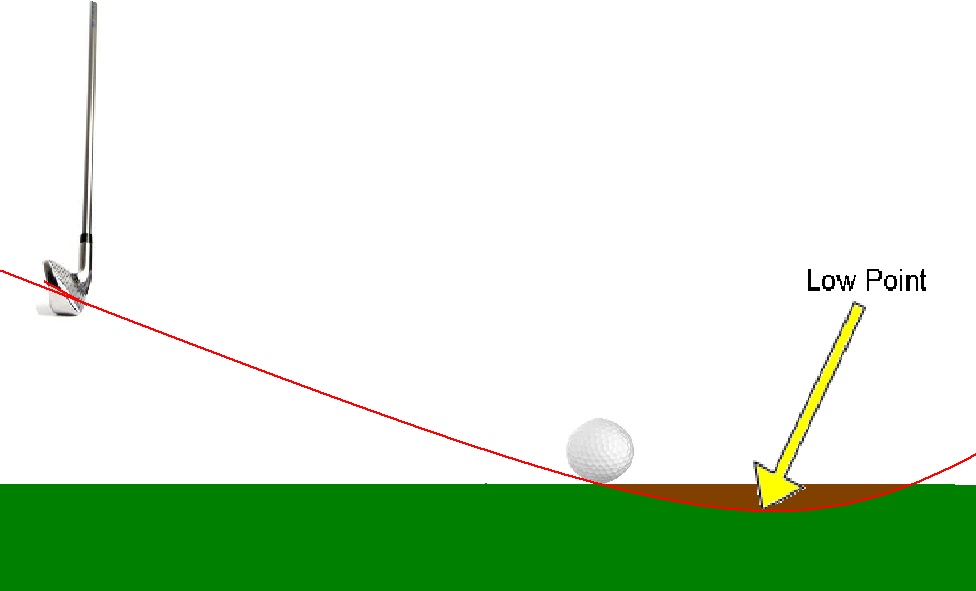 As we can see above, the lowest point of a pro’s swing is 4 inches in front of the ball. This means the divot (brown part) starts on the line the ball rests, and extends towards the target. It also means the club is travelling downwards as it hits the ball. 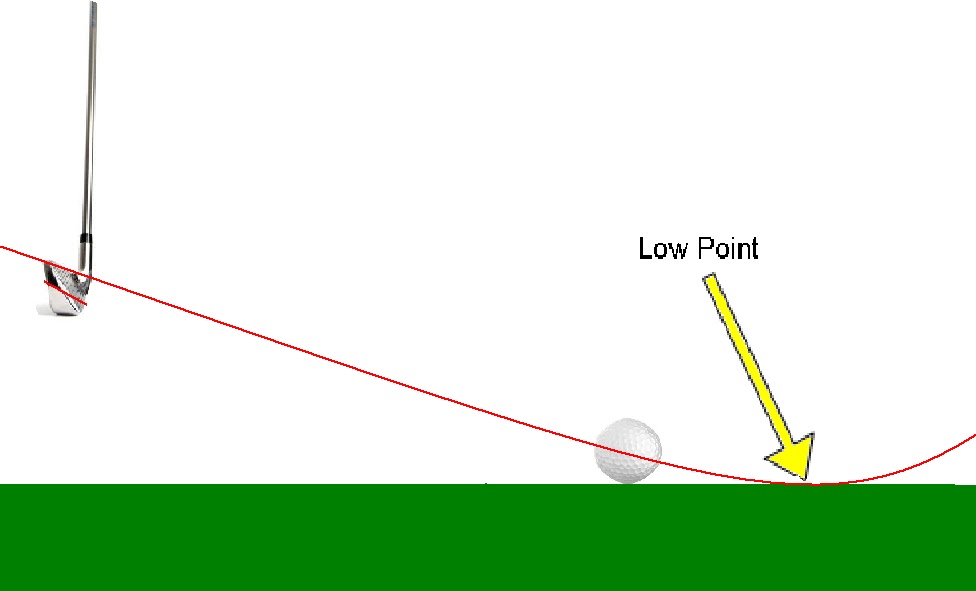 In the above picture, the low point is far forward enough, but not low enough. This is why making solid contact with the golf ball is about more than just good weight shift.

What do Poor Players do?

Where poor players struggle is, they tend to have the lowest point of the swing behind the golf ball.

The problem with this is that when their ‘swing circle height’ is too high, they will hit a complete top shot. Through frustration, they lower the swing circle height just a fraction, and now the shot becomes a minging fat one. Is this you?

The player thinks they have two wildly varying swing faults, but in reality it is just one fault – the bottom of the swing is too far behind the golf ball. This now requires incredible co-ordination to be able to hit a functional golf shot (and even if they do, they will not be optimizing other impact factors to create good distance). 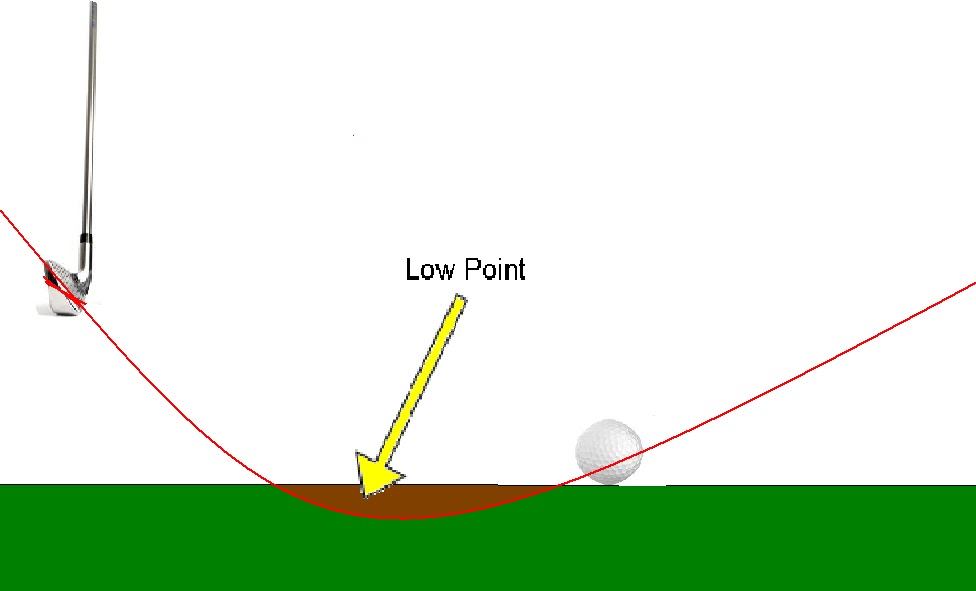 This player has the bottom of their swing too far behind the golf ball. This then causes the divot to be behind the ball, commonly known as a fat shot. The ball has no energy, no distance, and player feel they have hit “too much ground”. 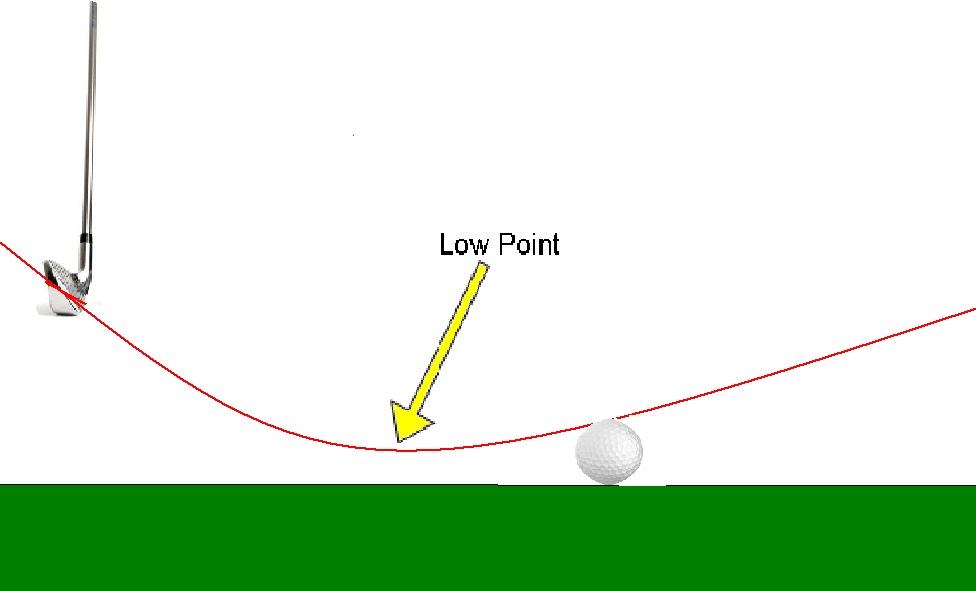 Fearful of the fat shot, they try to “not hit the ground” – but then they just top the ball. A tiny variation in swing circle height will lead to a dramatic difference in contact point of the ball.

It’s Easier for the Pro 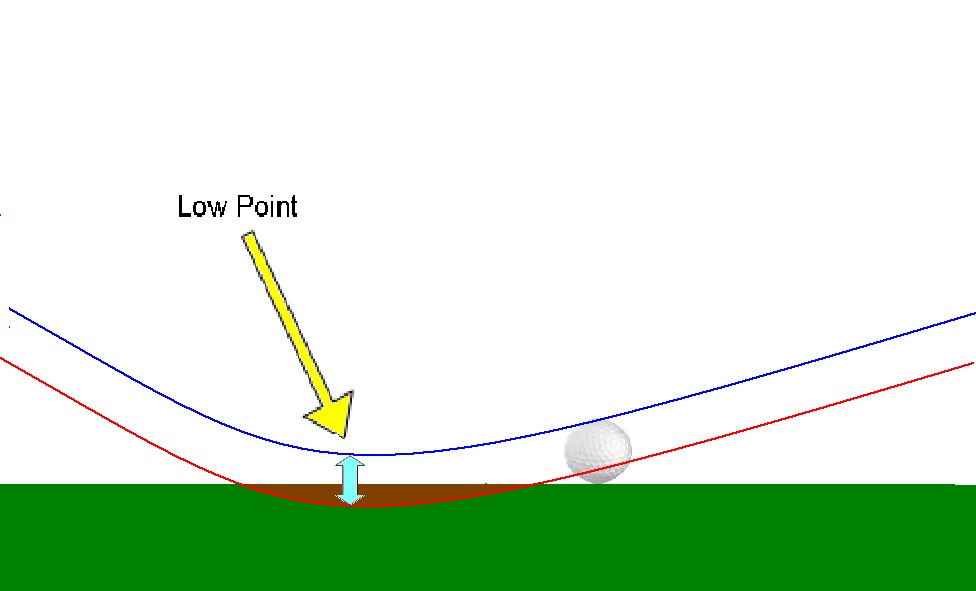 With  the bottom of the swing behind the ball, it is impossible to hit a decent shot. An inch lower (red line) and we hit a divot 10 inches behind the ball. An inch higher (blue line) and it tops the ball – we are stuck between a rock and a hard place. 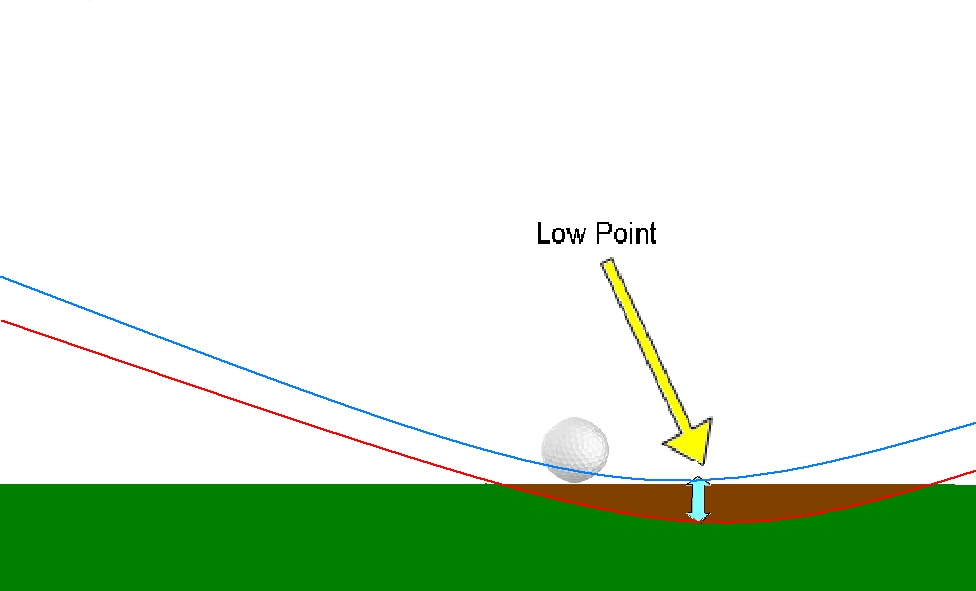 The pro has a much larger margin for error. With the divot in front of the ball, the same height discrepancy shows less difference in result. An inch lower (red line) and we hit a small fat shot, which probably won’t lose much distance. An inch higher (blue line) and we ‘get away with’ a slight thin shot.

Too much of Anything can be a bad thing

Please note that the law of diminishing returns applies here; you can have a ‘low point’ which is too far forwards, where margin for error is reduced, and impact factors start to reduce distance and trajectory.

Low point control can be improved through technical ways, but my preferred method is through a skill based learning Approach, which I discuss in depth in my bestselling book “The Practice Manual”. Click the picture to find out more

I will leave you with a video of Pablo Larazabal. After the slow motion view of the swing, they do a close up of impact which neatly demonstrates what you have just learned.