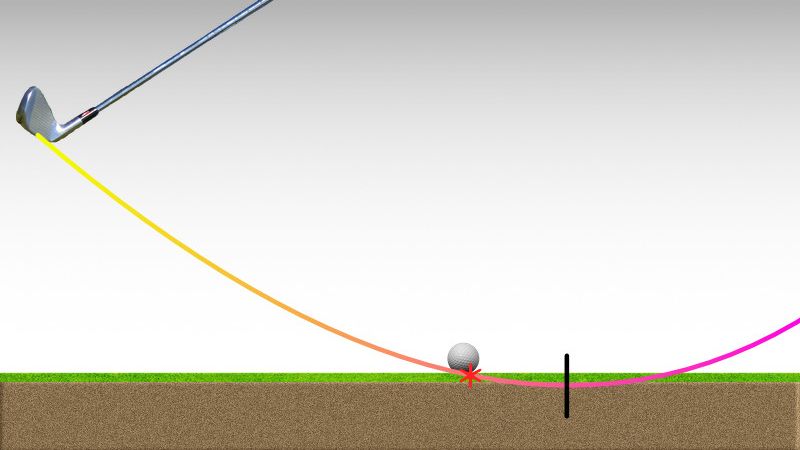 If you want to learn how to eliminate fat and thin shots and strike the ball better than ever, read on!

With the release of Trackman’s latest feature – a measurement of “Low point position”, the question begs

What is low point?

I realize that many amateurs do not understand this concept clearly. As it relates so much to one of my fundamentals (contacting the ground in the correct place), a lot of my coaching involves making changes to the low point of players in order to make them strike it better. Through a better understanding, you too can start to improve your ability to contact the ground like a pro.

The swing is Circular

In the downswing, the clubhead makes a semi-planar movement, similar to a big hula hoop (although it is not perfectly planar and not perfectly circular). From a front on view with a 2D camera, it looks something like this; 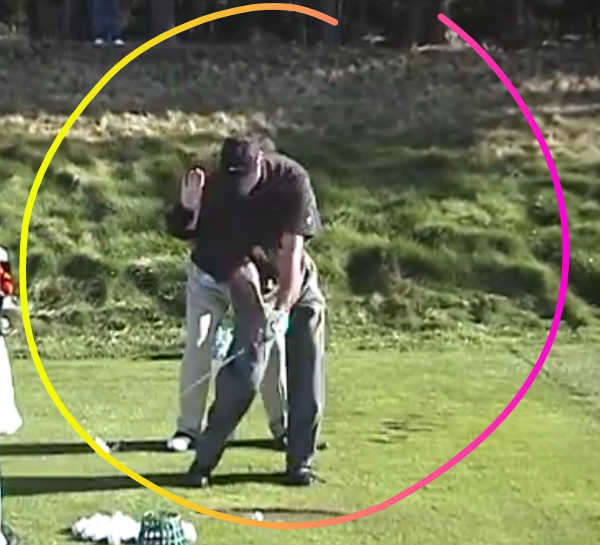 The arc that the clubhead traces will have a lowest point to it – just as every circular motion does. Zoomed in around the hitting area, it would look something like this; 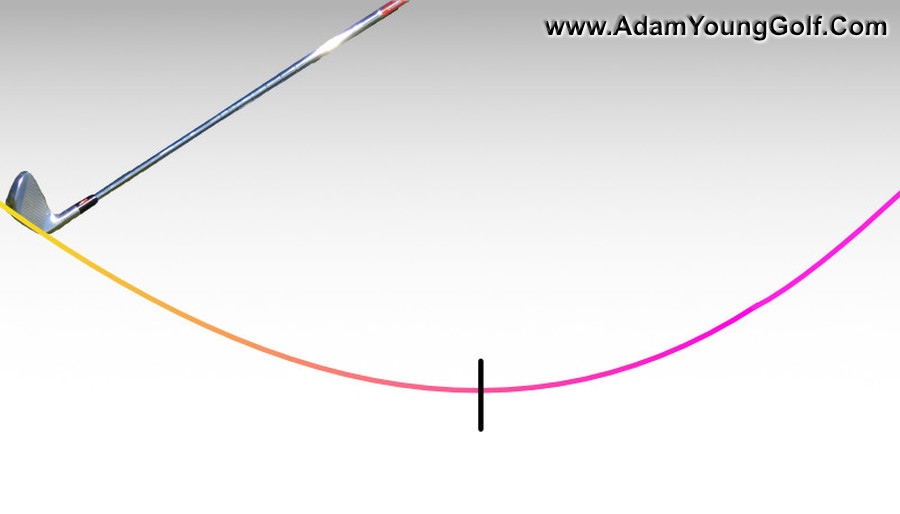 We could call this the “Swing Arc”.

The black line represents the lowest point in the swing – before this point (in a normal golf swing),

This works on a scale – the more to the yellow side of the arc, the steeper the angle of attack is (angle of decent) and the less dynamic loft we will have. This works in reverse too, with any point after the low point having

The more you move towards the brighter purple, the more these effects are increased.

The above is relative to the same swing. Hitting a ball earlier in the arc does not mean you will always create a steeper AOA with less loft, depending upon other variables which are changed.

Also, club and ball/turf interactions may skew the arc slightly due to deflection.

A professional golfer will have a low point which is in front of the ball for almost every shot which is struck with the ball resting on the ground. This is seen below 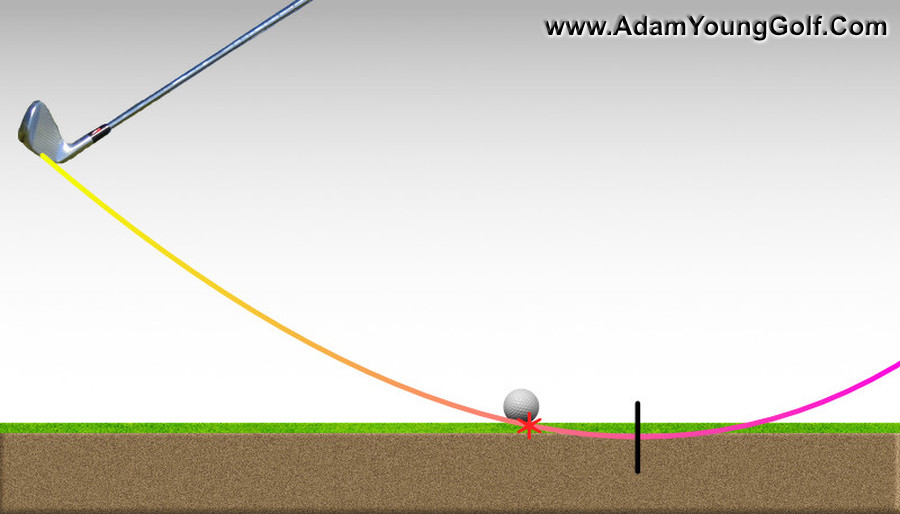 The ball is hit in the slightly descending part of the swing arc, and the divot/grass cutting will take place after the ball has been hit. This is what gives the pro their crisp contact, regardless of turf conditions. It also mean the ball is being struck before the ground, thus increasing spin rate (due to increased friction, due to less grass trapped between ball and clubface) and increased energy transference (maximizing distance). This type of contact also increases consistency of distance control, as well as accuracy consistency (as the club is not being deflected chaotically by the turf).

Obviously this is quite a violent interaction with the turf here, but we can clearly see the ball being struck before the turf as the clubhead is on the descending part of the swing arc.

One of the biggest misconceptions I see with not only amateurs but even teaching professionals is the idea that low point=strike with the ground – It doesn’t!

Low point and ground contact relate, but they are not the same. We also have to consider swing arc height. Let me explain.

Below is a picture of the pro low point once more 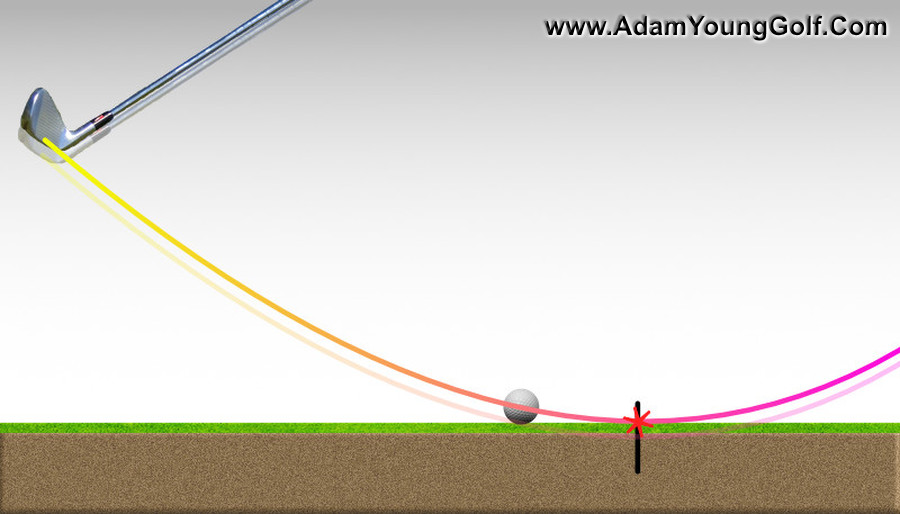 In this picture, the swing arc height has been raised about half a ball height. The low point remains in the same place, and the first contact point with the ground is in front of the ball. The club would actually knife/thin/semi-top/midget killer the ball. In fact, even with the low point in front of a ball like a pro, you can still top the ball completely if the swing arc is high enough (see below); 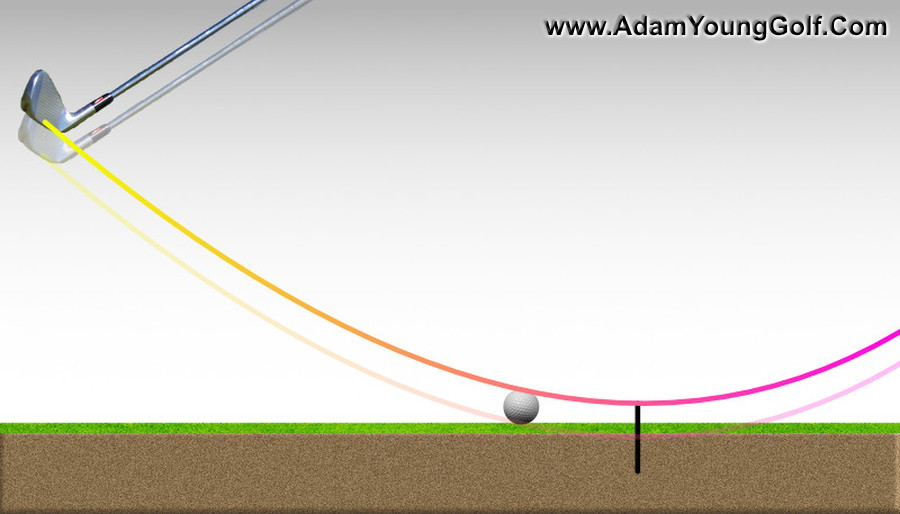 In the above pic, the swing has been raised a full ball height. Low point is the same as the pro version (transparent), but the result is certainly not.

The reverse is true – having the low point as far forwards as a professional golfer does not guarantee ball/turf contact like most people think. In fact, drop the arc height enough and you will enter the turf a long way behind, as shown below; 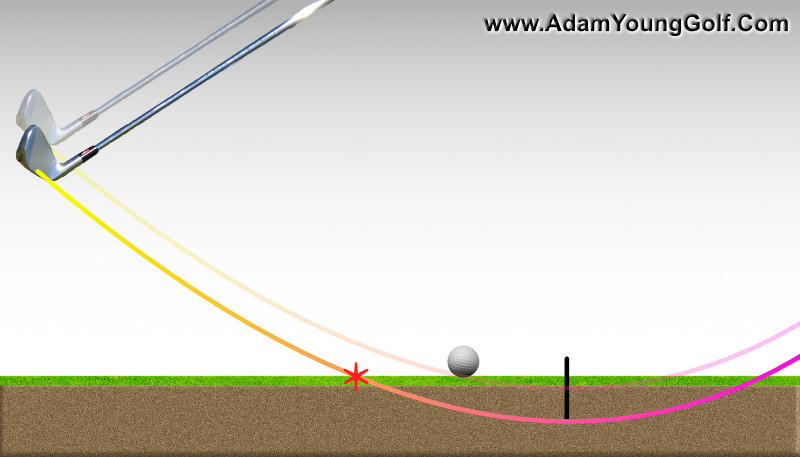 In the above picture, we see the contact point with the ground (red star) go very far behind the ball – Fat Shot! This is in spite of a good quality low point location. This would obviously produce a massive divot, and as the club is entering the turf in the steeper part of the swing arc, it would probably hurt your hands/wrists too.

It is also possible to have the same depth of swing and not contact the ground in a functional place, depending on the position (more towards/away from target) of the lowest point of the arc. For example, If the swing arc were the same height, we may see a topped shot if the arc shifts too far forwards (as seen below). 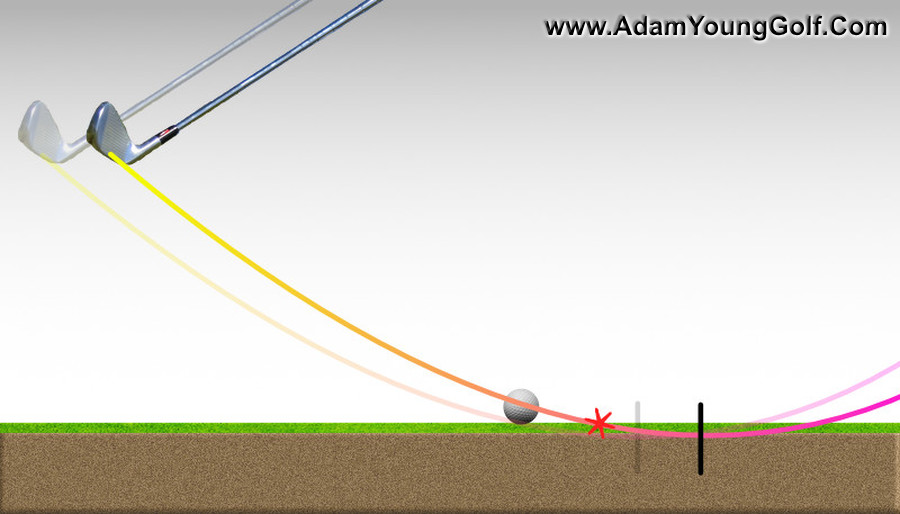 This excessive shifting of the swing arc forwards can create a (theoretical) first point of contact with the ground which is too far in front of the ball.

It works the same in reverse, with a low point which is the same depth but shifted farther backwards creating a ground contact which is behind the ball. 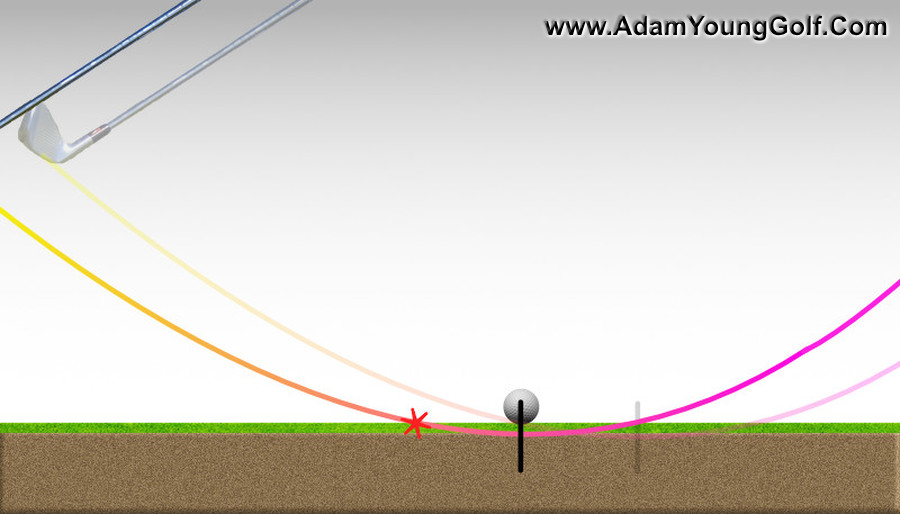 Now the low point is level with the ball, so any kind of divot will create a ground contact (red star) which is behind the ball.

For a beginner golfer, the lowest point of the swing can be so far back that they literally have no chance of hitting a decent contact, unless the ball is teed up in longer grass or on a tee. It can look like this 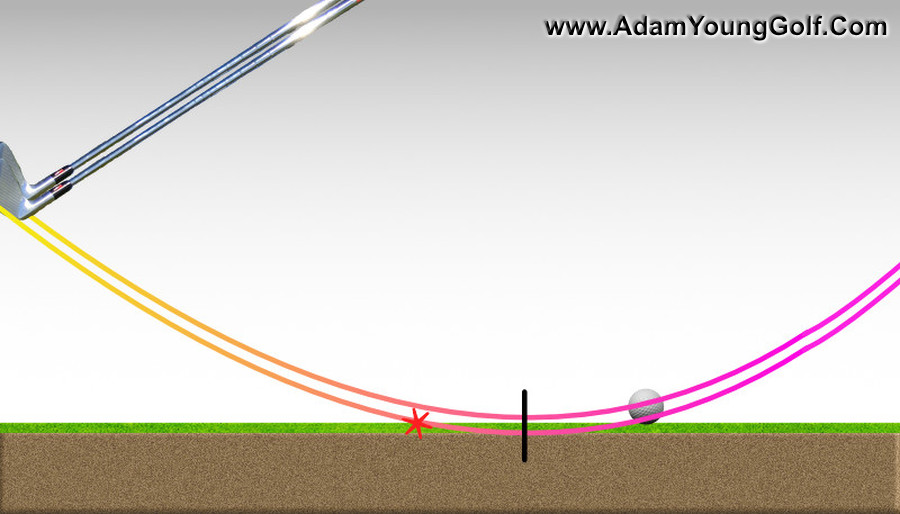 In the above scenario, with the lowest point of the swing behind the ball, any subtle variation in swing arc height can cause massively different (but equally as poor) results.

If you are to swing on the highest line, you hit above the equator and the ball dribbles along the ground. Drop a fraction lower, and the ground is struck a foot behind the ball (red star).

The above is usually a result of an incorrect intention – I.e a player is trying to get under the ball and pop it in the air, as opposed to just getting the loft of the club do the work. This is often exaggerated by slower speed players who tend to reach a lower peak height shot trajectory, and thus attempt to help it in the air.

You can read more about the idea of low point control (and much more), as well as ways to train and improve your skill and technique in these areas with The Strike Plan. It is the most comprehensive guide on improving your strike quality – enabling you to play with more distance, accuracy and consistency. Check it out by clicking the image below.

Trackman’s new update includes a new measurement of where the low point is (relative to the ball). It can tell you whether the lowest point of the swing is ahead of or behind the ball, and by how many inches. This allows your professional teacher to help you with your ground strike by doing the appropriate change to your swing (or by prescribing a task to you).

Seek out your nearest professional with a Trackman in order to get your impact data measured. Find out where your power leaks are occurring, and optimise your ball launch. Also, get accurate statistics for your distances and shot patterns – vital for great play.