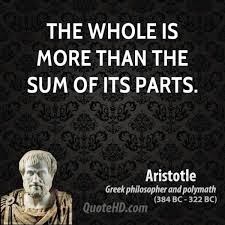 February 5, 2014 2:15 pm Byadmin InUncategorized
16
As teachers, we are gathering more and more high quality information
on what is happening in the swing of good players through the use of very
highly technical equipment. We can see very detailed information on almost
anything nowadays, from pressure distribution in the feet to the kinematic
sequence of a player (rotational velocities/accelerations/decelerations of
individual body segments). Whilst this information is great, and I use it all
myself, I would exercise caution.
There can be a tendency to break big
complex things (like a golf swing) down into smaller and more intricate things
in the hopes of understanding them better. This, in scientific terms, is called
reductionism. But there has always been one major problem with this worldview;
The whole is greater than the sum of its
parts

We must understand that the golf swing is a
massively complicated web of interconnected pieces, ranging from the
physiological to the psychological. As we gather more and more information, we should
realise that this search may raise more questions than it answers. I am all for
the search, and love the information that is being produced by researchers
right now. But I also understand that as the picture gets bigger, more complex
and more intricate, we should revert to simplicity. In fact, I think that the
picture will eventually get so big that we will be forced to go back to simple
things, as trying to learn all the pieces individually may turn out to be an
exercise in ‘plate spinning’.
There is also the danger that trying to
imitate individual components of a good player’s swing may prove more destructive
than constructive. There are many connected pieces working harmoniously together
to produce a swing of a top quality player. To isolate just one thing and change
that in your own swing may not produce the results you desired because this ‘new
piece’ may not fit in with the other pieces of YOUR swing. They may not even
fit in with the anatomy of YOUR body, or may contradict your own personal (even
subconscious, or unknown to you) concept of how the club should hit the ball.
Which is the point I am about to make. For more info on this idea, read my article on SUBCONSCIOUS CONCEPTS

This is the first time I am going to give
an example lesson. I may start to do some more of these, just to prove a point
about how big a change you can make in the golf swing in a very short time. I
am experienced enough to know that bigger changes are not always better, but in
this case, they were. The gentleman in this example was about at the end of his
tether, with a severe lack of distance, poor strikes, accuracy problems and a
high weak ball flight. Looking at the data on his flightscope reading showed the below numbers.

So, the Top picture shows the angle of attack as +1 (hitting up on the ball) which we know from my article on LOW POINT, this is not a good idea if you want consistent strikes. With a driver, this is great, but with an iron on the floor this is less than optimal. Players with these numbers will tend to fat and thin shots, and even if they hit it well, the ball will just fly higher and weaker than it should. The picture underneath shows that the clubhead is swinging 13 degrees to the left of the target at impact (orange line) and the clubface is aiming 0.1 degrees right at the moment of impact (yellow). This is a massive 13.1 degrees difference between swing direction and clubface direction. With this amount of face/path variance we are basically cutting across the ball – resulting in less energy transfer into the ball (less distance) and more sidespin (slice) and effectively a smaller margin for error with hitting the sweetspot.

Now we can see that the club path has moved to the right. A massive 15.4 degree change, and much closer to neutral. the face was at 0 degrees (square tot he target) which we know from ball flight laws would produce a shot which starts pretty straight and curves left. But this was just one shot – a lot of his shots were nice little draws onto the target, this was simply the one I screenshotted.
Not only that, but his Angle of Attack improved to -1.8 – almost 2 degrees down (pretty optimal, if that even exists). I didn’t capture this, but his dynamic loft changed from 60 degrees with a 7 iron, to 40 degrees. This better dynamic loft produced a lower, more penetrating flight which flew 30 yards further, even with a half swing. Let’s have a look at what happened to the swing.

The swing, before and After

Before we look at the swing pics, please understand that, unfortunately, the camera angles are not exactly the same for each swing comparison. I understand that due to camera parallax (distortion) some swing changes look more pronounced. Nonetheless, any trained eye can see some real big differences here.

The set up position was relatively the same. No major changes happened here.

Halfway back, it may look a little different, but really it is a similar backswing. The differences are from the fact the camera is static, but the player has moved his feet to the right slightly.

From front on, we can see a difference start to occur. More wrist set and a bigger looking body turn (some of this attributed to the camera angle). Something he had tried to work on for years was now happening more automatically.

Ok, now here we start to see a massive difference. This is halfway into the downswing. Whilst I don’t like drawing plane lines on the screen, we can see that the position the club is relative to his body and target is massively improved for what he wants to achieve (draw shot). If anything, he has slightly over-done it.

A similar position from the front on view shows his back facing the target a little longer, more pressure under the left foot (as confirmed by our forceplate readings), a better right arm position (something he had tried to work on for years and never achieved) and more ‘lag’.

Just pre-impact, we can see that the club is approaching the ball from a completely different direction, hence the massive change in the club path experienced from the flightscope readings.

Again, from front on, much better right arm position and he has maintained more of that wrist set coming into impact. Just enough for his level to produce better quality angle of attack and dynamic loft numbers.

The moment of truth – impact. We can see a massive improvement here, and a reason why his dynamic loft numbers came down by 20 degrees. Anyone would agree that this is a much better impact position.

Something that he had worked on removing for years was the chicken wing. unfortunately, all his attempts previously had been to try and improve that directly, but putting towels under the arms and physically trying to change the position. Not only had this put him at greater risk of injury, but it never really worked.
Other improvements noted are improved pressure under the front foot and more right arm extension. But it just looks like a position that any tour player could be proud of.

here is the same position from down the line.

Lastly, a very different clubhead and arm exit. We can see that in the new position, the arms are working more with the body in a better sequence.

Some things that we cannot see on the stills are improvements in sequence (how his body rotates the segments of the hips, shoulders, arms and club). There was also a small increase in clubhead speed, and the pupil reported an overall better swing feeling, with much more fluidity and rhythm. It also just looked more athletic.

How did we do this?

First off, I don’t normally make such big changes. It was only because this player was on the verge of quitting that I had free reign to make a more dramatic transformation. Bigger changes, however good, do not always equate to lower scores or better players. In this case, they did, but there will still be a lag time before the new technique can ultimately be automatic.
Normally, so many changes, and so dramatically, would take months or even years to complete. We did this in about an hour. In fact, the changes themselves took about 3 minutes to make, the first bit of the lesson was just me getting information from the pupil and seeing what they do at the moment.

It may take a pro golfer years to make subtle changes to their swings.
But sometimes, bigger changes are not always better, even when they are ‘better’
In my article on SUBCONSCIOUS CONCEPTS, I talk about how the mind holds an idea of impact, and that idea will shape our technique. This player was suffering with a slice. In an attempt to make their slice work, they shifted the whole swing to the left. This tends to make the lowest point of the swing too far forwards (LOW POINT), so the player will respond by keeping more weight on their back foot through impact. This then results in the technical look they show.

So I knew, if I could change this player’s concept of how to hit the ball by improving their attention and awareness of what the club is doing through impact, their technique would fall into place. At worst case scenario, he would learn what causes the ball to do what it does.

So, I placed a stick on the ground where the ball would be, and aimed it slightly to the right of the target. I told him to imagine it was a massive nail, and asked him how he would use the club to deliver it to that nail. We then progressed this idea to imagining a nail through the ball, angled towards the target and slightly towards the ground, and worked it up from chip shows to full shots. Within minutes his flightscope numbers had changed dramatically, and we saw the technique improve for free.

This was what I call an ‘External process’ swing thought. Ideally, I would have liked to use a more ‘External result’ focus and progress him through a series of tasks to bring about a more organic technique change. But I knew I needed results quickly with this guy. We did end up doing the ‘External results focus’ in subsequent lessons in order to improve his PERCEPTION-ACTION COUPLING.