Bored during practice? Are you working hard on the range but not seeing the success you want on the course? Listen up.

A couple of years ago, I wrote The Practice Manual – The Ultimate Guide for Golfers, I talked about many of the principles of effective training for golf. Things such as

In this article, I will show you a game I developed which includes all of these elements.

Take a look at the following flow chart, which depicts the game. 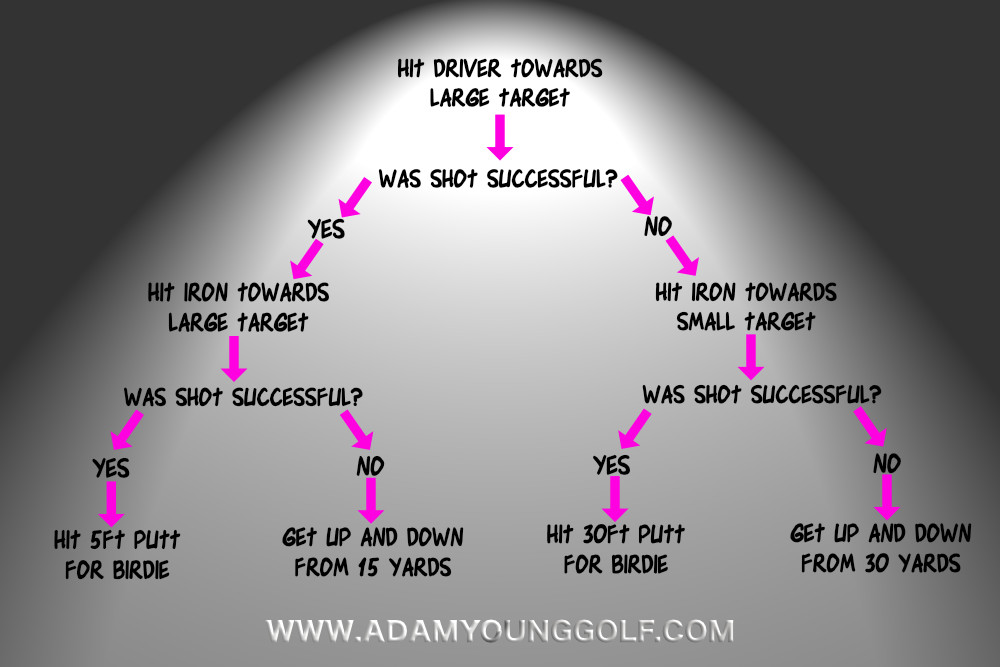 The rules are simple, you have two targets, one wide and one narrow. You could use the poles at the back of a driving range, or go between yardage markers.

For example, a player hits their drive down the target. They then use a 7 iron to the large target and successfully hit it. They have a 5ft putt for birdie.

The player then misses the driver on the next attempt, misses their iron to the small target, and has to get up and down from 30 yards.

On their third attempt, they miss their drive but hit their iron shot successfully to the smaller target. They then have a 30 foot birdie putt.

I think you get the idea, a flow chart is pretty self-explanatory.

Why This Game Is Great

When you compare it to beating 100 balls to the same target with a 7 iron from the same spot, this game is a whole new world.

For a start, this game simulates the game of golf itself. Hmm, novel idea – practicing the game you want to get better at! Hitting different clubs to different targets, having to step back out of the bay, and only having one-chance each time is preparing you for better golf. This, in itself, will speed up transferring your skills to the golf course.

It also has pressure – imposed from the “one-chance” idea, as well as from the fact there is a consequence if you miss your shot.

In this game, every shot counts.

We also have the self-induced pressure from trying to create a score – and this pressure will get higher the more you play this game, as you will be trying to beat your last/best score.

Also, we can adjust the difficulty of this as we progress. In my group coaching sessions, I have different target sizes depending on the level of player. Once a player can shoot par or better, we move them to a more difficult scenario.

In The Practice Manual, I discuss 5 different phases necessary for optimal growth and performance. This game deals with the final phase – ability to transfer your game onto the course and improving your playing skills. I call this phase the Transference Phase.

While you are not going to learn how to drive the ball 300 yards with this drill, it will allow you to take your current game and use it better. If you are frustrated with hitting balls like a golf God on the range, only to see those skills disappear on the first tee, this is the type of thing you need to be doing more of.

Especially when tournament season comes around – these types of drills will allow you to peak better. They encourage the same type of attention/thought processes that you would use in a competition, and so it prepares you for that. Ball beating with one club to one target does not do this – as you have likely found out.

If you want to take your game to the next level, “Next Level Golf” will get you there.

With information on training more effectively, psychology, technique, strategy and more, this is the best source of high-end instruction aimed at serious golfers. Check it out – click the image below.