Pro Golfers Are Not THAT Good – Here’s Why 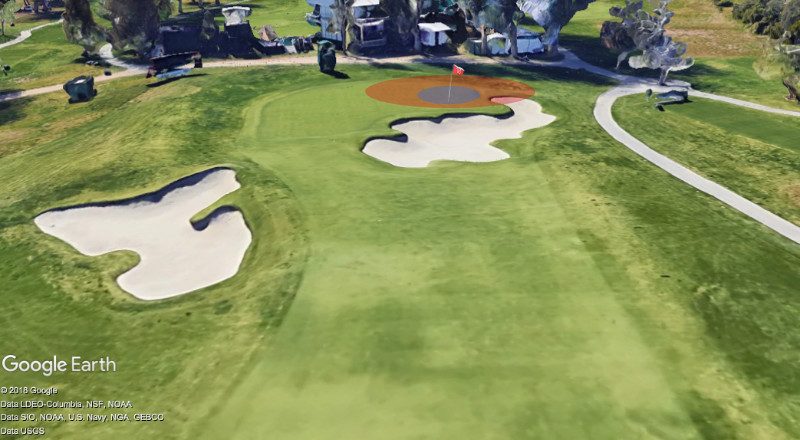 Pro Golfers Are Not THAT Good – Here’s Why

This week, I caused a bit of controversy when I tweeted the following. 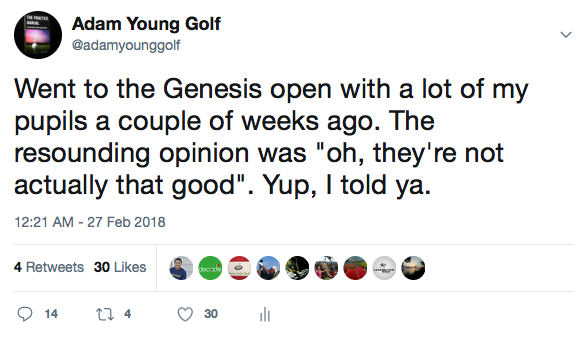 Woah, what!
I know what you’re thinking

these are the best players in the world – how can you possibly say they are rubbish?”

Well, first, this is not what the quote represents. Secondly, we have to define an important word in the quote – “that”.

They’re Not That Good

The golfers that came with me to the Genesis open were average players with high handicaps, or no handicap at all.

But they watch TV.

They see the highlight reel of the best players in the world who happen to be playing their best golf THAT week.

So they have warped perceptions.

Pupil – “I thought they hit every single fairway”
Me – nope, they’re not THAT good.

Fact – pros average proximity to the pin from the fairway with a 7/6 iron is over 30ft. Yes, they “occasionally” knock it to 10ft, but often hit it outside this range too. Also, they miss 45% of the greens from this range

Pupil – “ I thought they hole every 10ft putt they look at, especially on those perfect greens”
Me – “nope, they’re not THAT good”

Fact – pros hole only around 40% of their ten footers – even on the best greens in the world.

Pupil – “wow, there are a couple of guys who shot in the 80’s today. I thought they never shoot that much over par”
Me – “nope, they’re not THAT good. They have bad days like the rest of us”

In fact, during the day we saw; 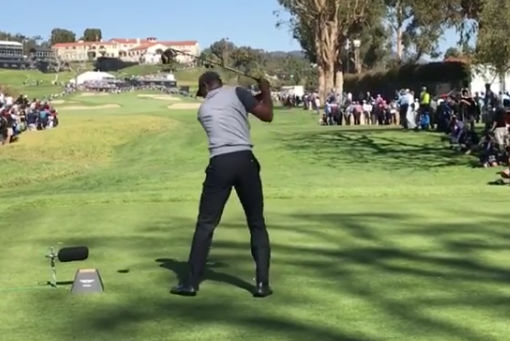 Tiger Wood’s reaction to a tee shot that ended up in the bunker on an opposing fairway. He managed to hit his shot of the day from that bunker

Obviously, as a professional coach who lives this info, I understood this. I had explained this to my players before too. But, for whatever reason, seeing it live in action made it really sink in.

These guys are humans playing one of the most difficult games ever invented.

I think I labor this point for a few reasons, namely:

For example, if you have unrealistic expectations of what the pros do, when you hit a poor shot it’s tough to “dust it off”. It’s more comforting to realize that the pros make mistakes too, but they get on with it and deal with the next shot in hand, making lemonade out of lemons.

Unrealistic expectations also affects your strategy. If you think the pros are hitting it to 5ft all the time with a 7 iron in their hand, you are going to take on riskier pin locations. This can quickly turn an “average miss” into a dropped shot or more. 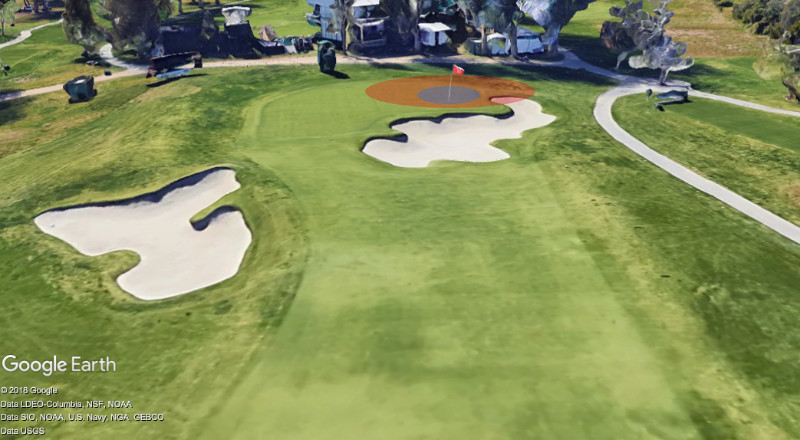 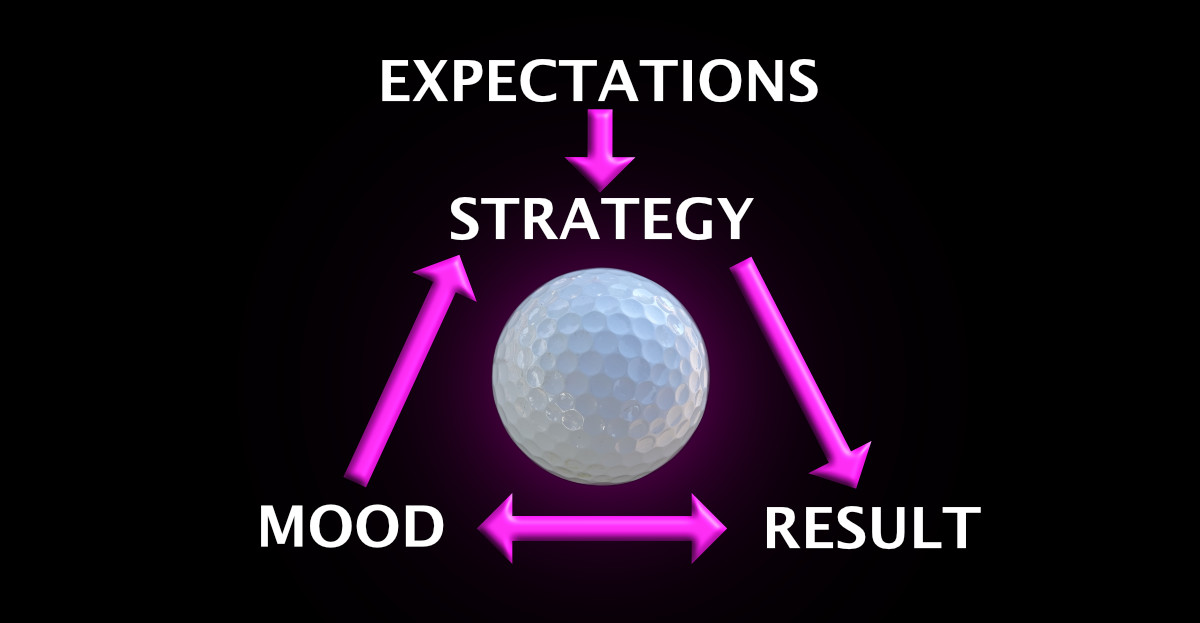 To flip this argument completely on its head – everyone is amazing at golf.

Just think about it, in order to send a golf ball to our target, we have to;

It’s incredible that we can do this at all, with all of our moving body parts.

Did you know that, in order to hit a 35-yard-wide fairway at 300 yards, a player has to present the club face within a 3 degree window?

That’s crazy! Just 1.5 degrees right or left and the ball will miss the edge of the fairway.

I don’t know about you, but I can’t even see 1.5 degrees – the thought of swinging a clubhead around our body at 120mph while attached to a 45 inch shaft and then returning it with that accuracy is astounding. 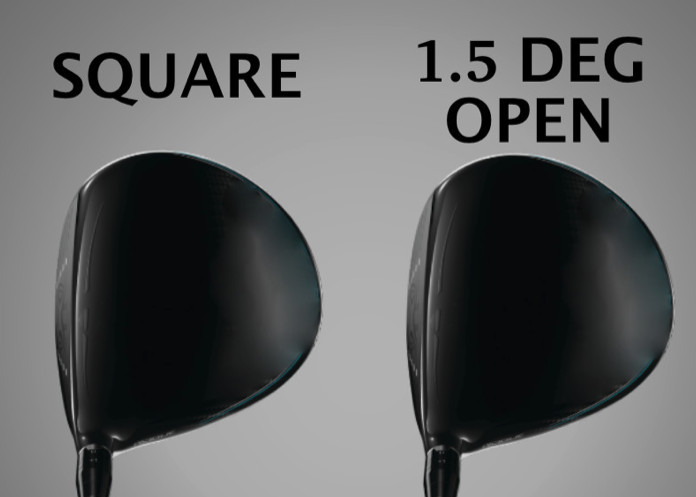 At 220 yards (average amateur golfer distance), you still have to return that club face to a 4 degree window (2 degrees either side of center) to hit that 35 yard fairway.

It’s tough to even see 2 degrees either side, let alone flail a club around your body at full speed and return it back there.

Well, you are right, but they only do it 10% more often (pros average 60% fairways, amateurs average 50%). And their wild shots can be just as offline as an amateur’s.

Just like our club face example, the differences between a good contact and a poor one can be small. Watch this video below.

So, with golf, everyone is good, but no one is THAT good. Not even the pros.

As our club face example suggests, the difference between pros and amateurs CAN be as little as;

No one would argue that quarter of an inch or a few degrees is a HUGE amount – but in golf, with such fine margins between success and failure, these small differences ARE huge.

All of these small differences add up with each shot. If dropping just half an inch in height can make the difference between a birdie and a bogey, these effects compound over the course of 72 or more shots.

The pros ARE better than amateurs, but often by a few degrees, an inch, or one mph of speed control (in putting, for example).

But it could be said that it is their ability to consistently control these fine margins, as well as the accumulations of the combinations of fine margins, which make them superhuman.

Where they obviously excel is their ability to do these things at incredible speeds. Not many amateurs will ever swing a club anywhere near 120mph. 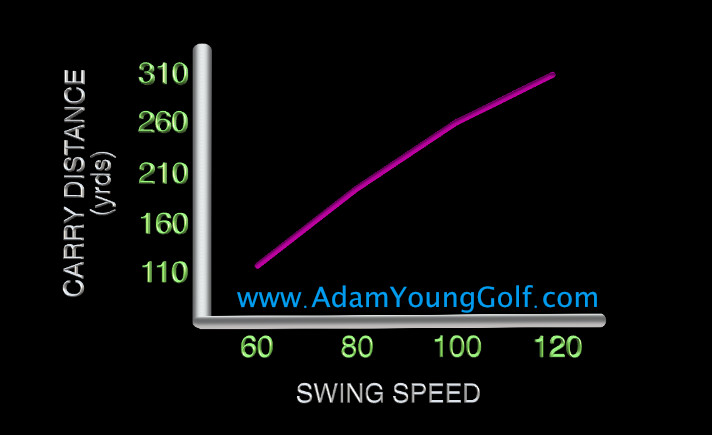 Also, their ability to do these things under extreme pressure is what impresses me the most. I can strike the ball pretty darn well – but put me in front of a crowd of 3000 people on a Sunday with 1.5 million on the line and I might just fall into a dribbling mess on the floor.

We can also look at this problem from the view of functionality versus consistency.

The issue is , they are often returning the club consistently to poor places. See the below example. 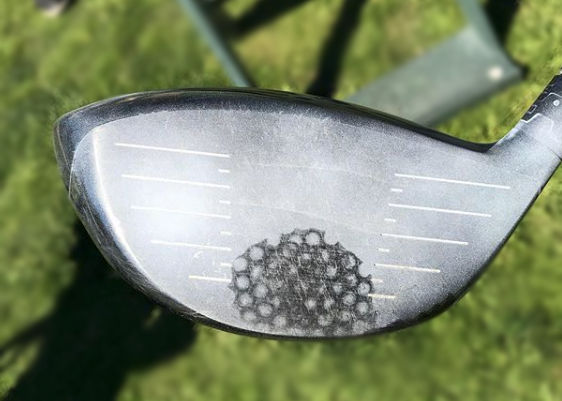 Howard was losing 40 yards of carry distance by returning the club to a consistently poor spot.

Better players (scratch players, for example), have figured out most of the functionality – they return the club to the right places. Higher handicappers might be inconsistent, or consistently poor – which requires different interventions.

Professionals have both – they are optimal AND consistent. Their level of consistency may only be 0.25 inch better than that of a scratch or higher hand player, but this combination of optimal AND more consistent really stacks up.

What to Do Next?

In The Strike Plan, we explore the are where amateurs lose the vast majority of their shots – Strike!

I believe that The Strike Plan is one of the only programs out there which looks at controlling the small changes which make the difference. Through using the motor learning scientific research, I show you drills which enable you to close the gap on the professionals quicker than ever.

In the strike plan, we go through these concepts more in depth, showing you;

Find out more about the strike plan by clicking the link.

The message to take from this is YES, pros are very good – but amateurs are often not far away from good function.

They may just be less consistent by very small margins, for example a pro might be returning the club to a half-inch bandwidth, whereas an amateur might be closer to a 3/4 inch bandwidth

Amateurs might also be doing the wrong things consistently, such as having their whole bandwidth 1/4rd of an inch lower than optimal.

Or, amateurs might be using techniques where the margins for error are much smaller – such as having the lowest point of their swing too far in front or too far behind the ball