Should You Draw The Golf Ball? 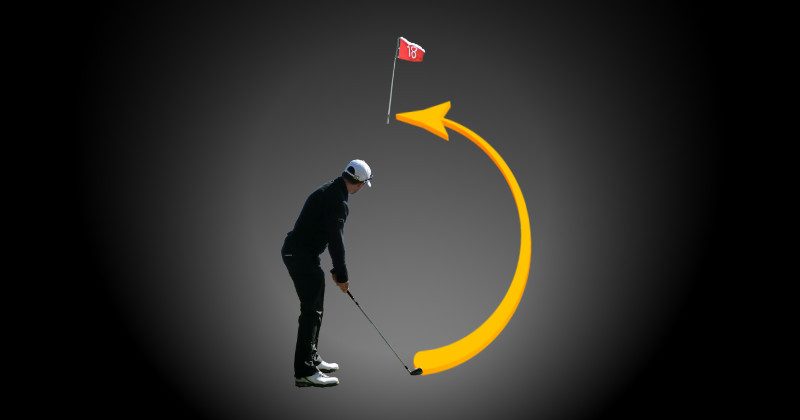 Should You Draw The Golf Ball?

The draw shot is often sold as the answer to all of your golfing problems. This article takes a look at some of the myths surrounding the draw shot, and why it could be potentially damaging to chase it. 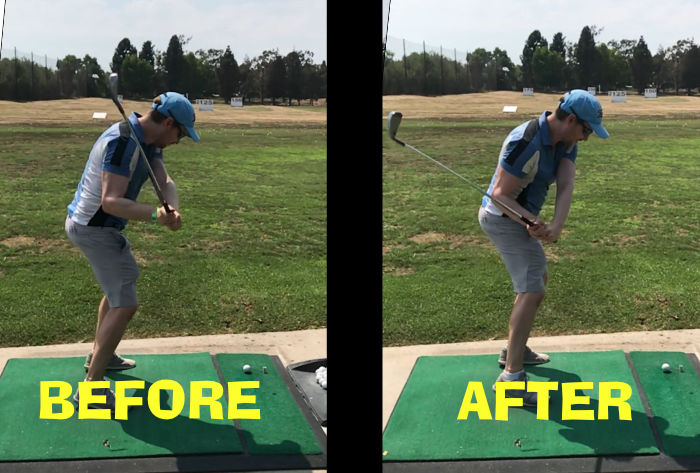 This before/after is ironic, not real.

Nice, but what does it all mean?

It’s great if the player has the goal of hitting a draw – the instructor might need to pander to you and give you what you want. But ultimately, are we not trying to get better, shoot lower scores and play more consistently?

The amateur golfer with the chronic slice hates it. Seeing the ball peel off to the right into the bushes fills their gut with anger.

But a draw shape does not make you a better player, it just means the ball is curving in the air in a different way. Ultimately, whether it curves left-to-right or right-to-left is less relevant than if the ball lands on or close to the target.

And, physics-wise, it is no easier to hit your target with a face thats closed to the path than when it’s open to the path. 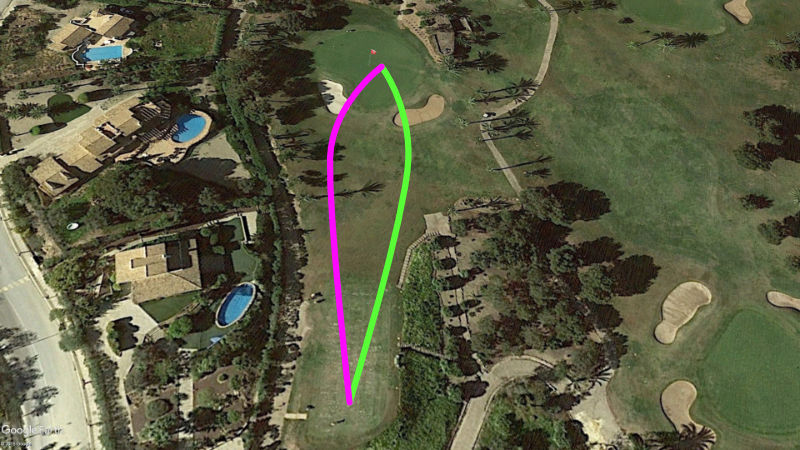 Which shot is better – the fade (pink) or draw (green)? Trick question – the end result is the same.

People mistakingly assume that playing a draw shot is going to make them hit more targets – it wont. You are just as susceptible to missing the fairway/green playing a draw as you are a fade shot – curving the ball from right-to-left doesn’t hold some magic power that stops a ball going offline.

The player who changes from a fade shape to a draw shape is often just swapping out one set of problems for a new one.

BOTH suffer with missing the target left and right – changing the shape doesn’t eliminate this. It only changes the look/shape/trajectory of your miss.

It’s also a semi-myth that you will hit it longer with a draw shot.

Face-to-path is a measurement of how open or closed the clubface vector is to the direction of clubhead travel through impact. This is the main factor behind why a ball curves. 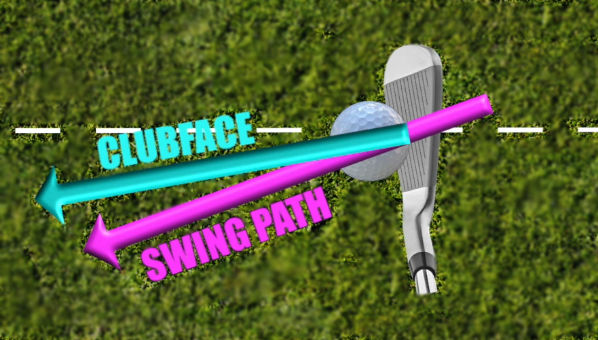 When slicers hit their first draw shot, they often gain distance. However, this is not because the draw shot holds some extra oomph – it’s more often due to the fact that the player has reduced their face to path difference. This then affects something called spin-loft, which improves ball speed.

I call it a semi-myth because, while the majority of golfers will have lower spin-loft with a draw than they will when fading (thus hitting a draw farther),

It’s also important to note that you can improve spin loft (and thus ball speed) without turning a slicer into a drawer of the ball.

Want anecdotal proof? Jack Nicklaus was an incredibly long hitter and faded the ball. Bubba Watson does also, as does Dustin Johnson (although they can all hit it both ways as desired). And, many of the drivers on the World Long-Drive circuit are faders of the ball.

I hear your whines of

“but I still want to draw the ball”.

So I’ll give you a bit more food for thought.

I personally think it can be a great exercise for some players to learn to shape the ball both ways – even if you only stick with one way on the course. Check out my shaping drill below.

Take a look at the comparison between my fade and draw swing. What do you see?

However, there may be some more negatives involved with changing your dominant shot shape from a fade to a draw.

For one, it’s a new motor program – and usually one which is significantly different to your current one. For this reason, it may require thousands of reps before the new pattern gets ingrained enough that you no longer have to consciously think about it. It also takes a while for the new pattern to become coordinated enough to work better.

Add to this the fact that, on the course (under pressure/fatigue/lowered concentration) you will likely revert to your old movement patterns. This can cause the dreaded old-swing/new-swing issue, where you battle between the two. 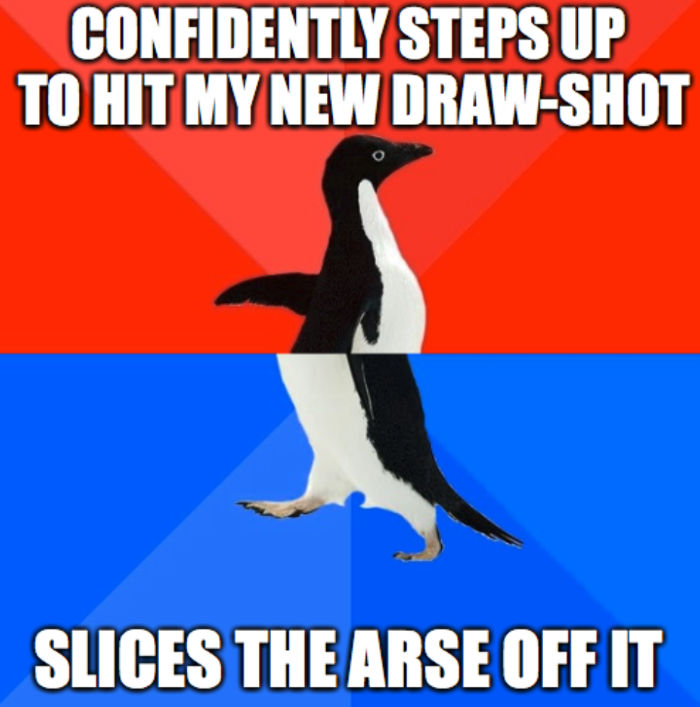 Also, changing our swing direction (which is often necessary to hit the draw shot) can also affect our low-point location. For many, this can make them hit the ground early, and so they have to add other swing-changes in order to get back to their old strike quality.

We also have the issue of our perceptions. If you have played a certain shape all your life, you will have built up an underlying sense and comfort with how you’re going to see the ball move through the air. Your unconscious will also have a decent understanding of your patterns of misses, as well as unconscious strategies to allow for those misses.

When you change your shape of shot, you lose all of that.

You have to build it up again from scratch.

Oh, and one more thing – you might be fighting what nature intends for you. Some people’s bodies are more inclined to swing in a way which promotes a fade, and vice versa. Trying to play the opposite shape can often create a fight between what your physical limitations allow and what you are forcing upon your body. Sure, we can win the fight against our bodies, but it can be a hell of a battle.

So, maybe you are asking

“But I want to get better at golf. How else am I going to improve?”

When I first started coaching, I thought I was the dog’s bollocks for being able to get a player to hit a draw-shot in (often just) a couple of swings.

The pupil would stand in awe of the fact that they saw a ball move to the left for the first time in their life. But I quickly found that players weren’t getting better as much as I would have liked (for the reasons mentioned).

I quickly learned that players could get better faster by;

I go through all of the above in The Accuracy Plan. Click the link (image) below if you want to learn more.

I’m not saying that changing from a fader to a drawer of the ball won’t light up your World – but there are not enough articles out there conveying the potential pitfalls of going over to the “other side”. This article highlights the fact(s) that;