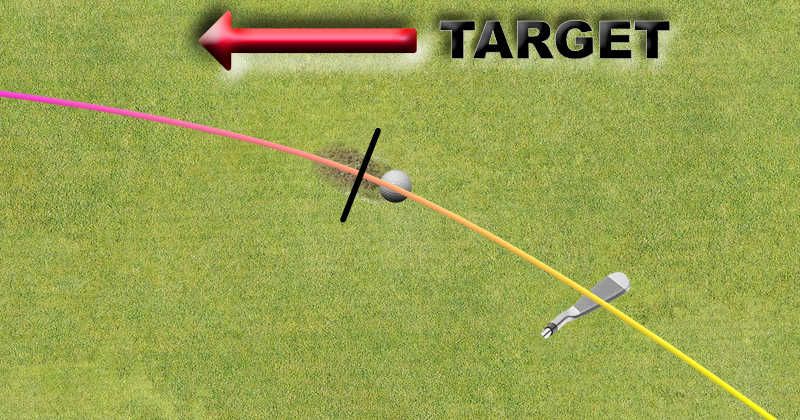 This article explains how your swing direction might be causing you golfing issues.

Most of us have heard about the golfing terms “Out to in” or “in to out”, referring to whether your club is swinging more to the right or left of the target through impact. But have you ever thought about how or why it affects your golf ball flight – it might cause more than just a slice or a hook – it could even affect how you strike it.

Imagine a swing direction which is lined up directly to the target – from the eyes of a golfer looking at the ball on the ground, it would look something like this; 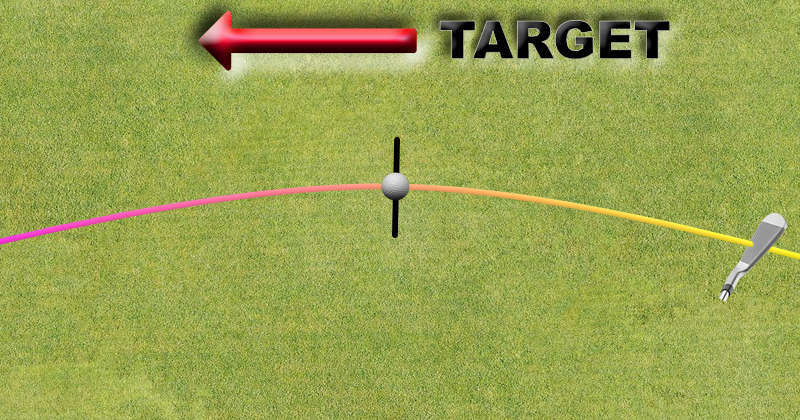 In this example, the ball is struck during the lowest point of the swing circle (the black line). During this time, the clubhead is travelling towards the target, which we call a square swing path. Also, the angle of attack is neutral, meaning the club is neither travelling upwards or downwards. If the club face at impact is also square to the target, the ball will fly straight without any curvature (barring gear effect).

If we shifted the swing direction more left around our body location (centre of mass location), it would also tend to move the lowest point of the swing further forwards, quite dramatically in many cases. It would now look like this; 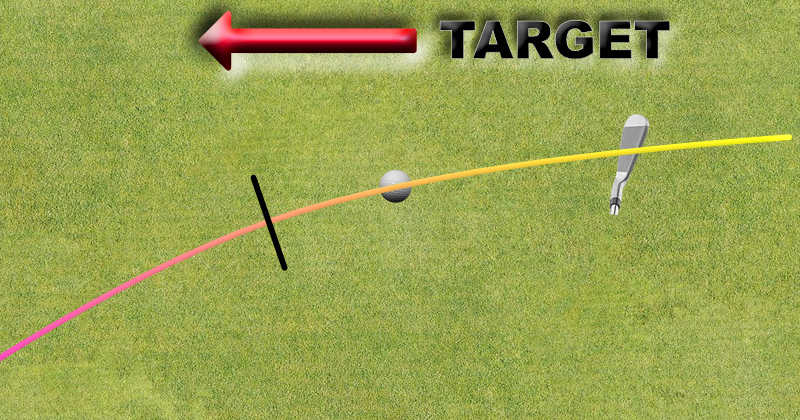 The bottom of the swing arc has turned 20 degrees to the left. This means

Also, the swing path tends to be more left (remember, swing path and swing direction are not the same), although this is dependent on the relationship between swing direction shift and low point position. The more the swing moves left, the more the path will tend to move left – although this can be cancelled out by the low point moving more forwards (striking the ball on the earlier part of the swing arc, when the club is moving more to the right). I know that last paragraph is a lot to digest. 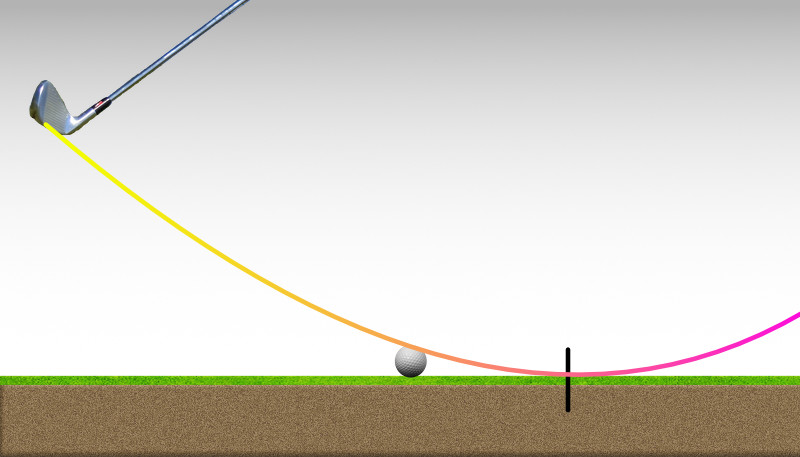 This will result in topped shots unless the golfer drops the swing arc deeper, or moves the low point positions backwards. Dropping the arc deeper would look like the picture below; 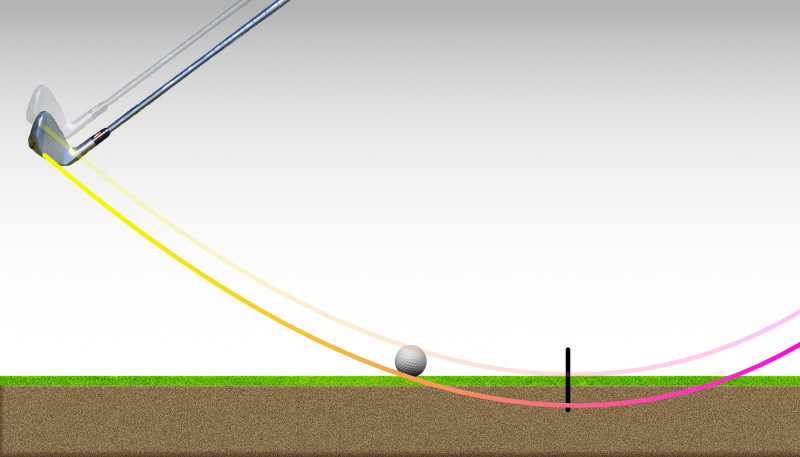 We see the player drop the arc height so now it matches the low point position and produces a functional ground contact. However, due to the ball being hit so early in the swing arc (yellow part of the arc)

All of the above means that by swinging left, we can tend to produce more of a low, squirt fade/slice.

Stay on the back foot

The other option a golfer has to neutralize that overly forwards low point position is to shift it back, as shown below; 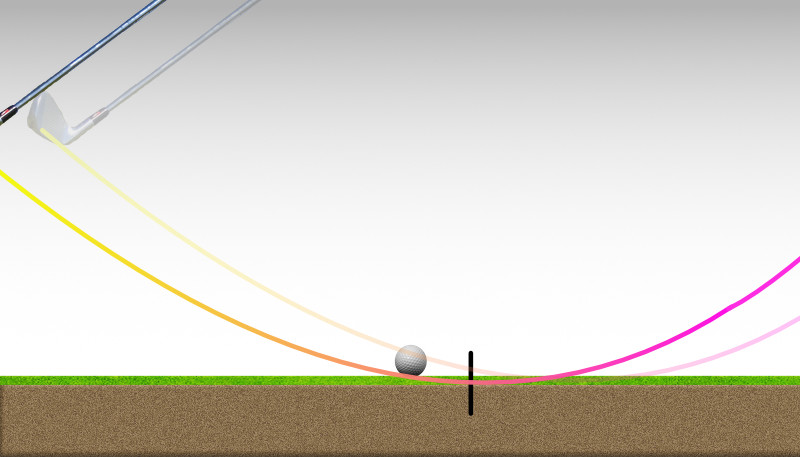 We typically see slicers stay on their back foot – and this is often a huge reason why – it is effectively two wrongs making a right. I am using the term ‘wrong’ loosely here, as it is perfectly fine to have a leftward swing direction and path and play great golf. However, we see a chain reaction of events, where the swing direction being left has put the low point forwards, then the player ‘compensates’ by moving the low point back in some way (maybe an early release, staying on the back foot etc).

The swing arc, from the view of a golfer, would look like the below picture; 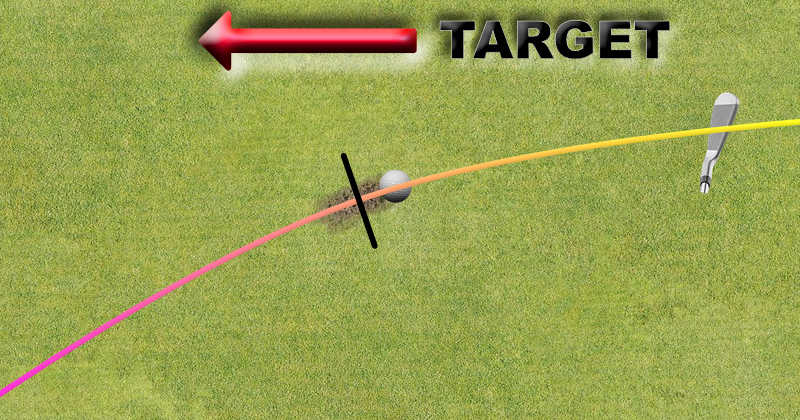 Obviously a golfer could also just  move the ball position farther forward in their stance, which we often see. This also serves the purpose of making the contact point with the ground and the ball match up better.

The basic things to remember are, when you shift the swing direction more left, you will tend to move the low point forwards also. This then means you either need a corresponding drop in arc height (but this usually puts the club too deep into the ground and hits the ball much lower and more slice/less draw spin).

Otherwise, very commonly we see a player try some other form of moving the low point position farther backwards – such as scooping (early release) or lack of weight shift/tilting their upper body back dramatically).

Often, symptoms such as left arm bending wildly, poor weight shift etc are merely a result of a poor swing direction – which is usually caused by a poor ball flight (player reacts to ball flight by swinging in opposite direction).

We often hear this phrase, and the idea can be fine if it neutralises the swing tendencies of a player enough to make them more functional. However, we have to understand that when we swing more to the right, it will have an effect on our low point position – which affects all the other variables, as shown below; 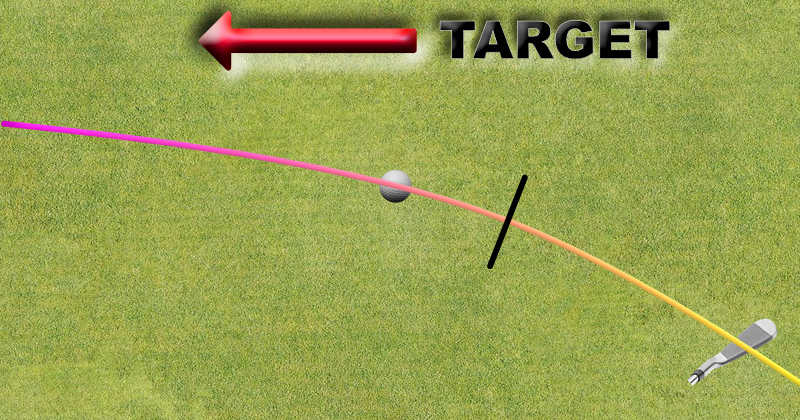 So we see a player (usually in response to a hook developing) start to swing more and more to the right – in this case 20 degrees. This puts the low point of the swing behind the ball. If the player is able to strike the ball at all here, they will tend to do so with an even more closed face to path relationship (as the club tends to be more closed relative to the swing arc).

From a face on perspective, it looks like this; 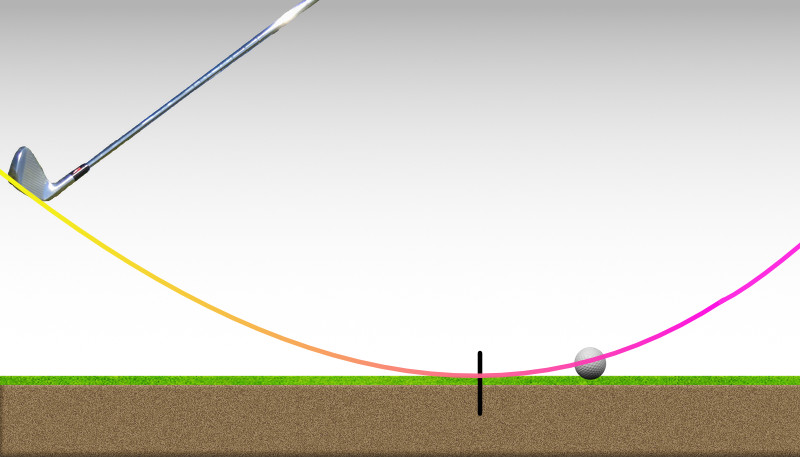 With the low point of the swing this far behind the ball, the player can only really top/thin or fat the ball. A poor player will continue to strike it poorly, occasionally getting away with a fluffy lie or teed up ball. But a better player will learn to shift the low point forwards again to match the ball (by shifting weight excessively/delaying release), or by simply placing the ball farther back in the stance to match where the club is contacting the ground.

From a golfer’s perspective, this will look like the following; 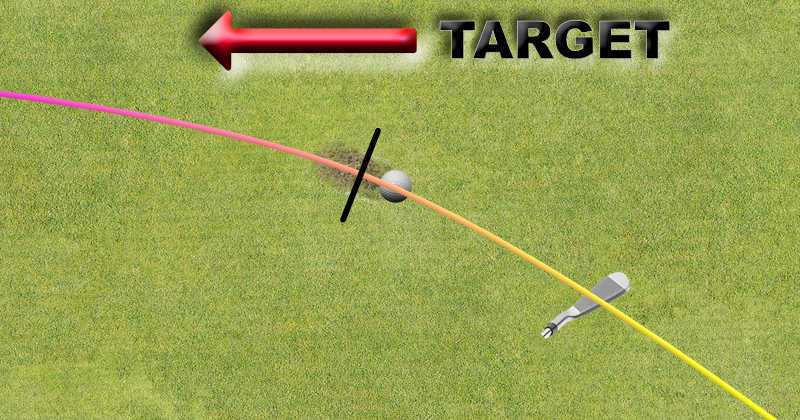 The low point has been shifted far enough forwards in order to strike the ball and contact the turf effectively. However, the path is now excessively to the right (swing direction at impact). While this may not be optimal (whatever optimal is), it can certainly be functional.

When we swing more to the right, this has the tendency to move the lowest point of the swing farther back relative to the ball. This causes strike issues until the player then figures out how to shift the low point forwards enough (via a more delayed released/excessive weight shift etc), or moves the ball back in their stance.

Usually, ‘technical errors’ such as an overly back ball position, excessive weight shift or excessive shaft lean are simply a symptom of a rightward swing direction.

Obviously, all of the above is relative to a player who changes a swing direction while keeping everything else the same. In the real world, this it is often more complex, and as teachers we are more aware of the millions of possible combinations which can occur, and how one swing change can affect another.

So, if you found this info quite complicated, understand that as teachers this is simply the tip of the iceberg of what we know about the swing and all of its complicated intricacies. So go and see your qualified teaching professional to help you with your own personal swing.

However, I have put together a small table with a list of tendencies that I see hold up in the real world. So, if you are thinking of making a swing direction change (e.g. if you are working on swinging more in-to-out), understand how it may affect the other variables.

I know this article is quite technical in nature. However, if there is one thing that the amateur can really take from this, it’s that changing your swing direction will have an effect on your Low Point. It can also affect your ball flight patterns via clubface/path relationship changes (creating more fade/draw biases). Ideally, you should see your pro for a better understanding of what you need to improve your ball flight patterns.

If you wish to learn more about ball flight laws, as well as how to train your golf game to a new level, click the image link below to check out the golf bestseller – The Practice Manual, The Ultimate Guide for Golfers.