The Biggest Cause of an Offline Golf Shot 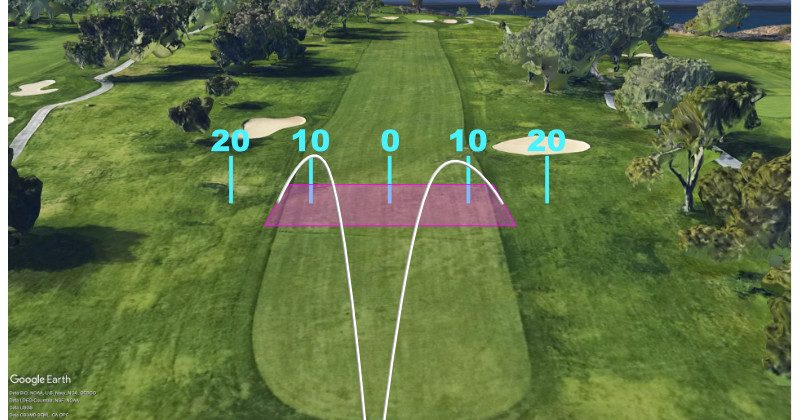 The Biggest Cause of an Offline Golf Shot

What influences the direction of a golf shot more – clubface angle, or swing path?

While both of these factors are very important when it comes to hitting straighter golf shots and shaping the ball at will, one of these factors is more dominant than the other – for many reasons.

And we will take a look at those reasons here.

Perhaps you have stumbled across this article and are not already aware of what clubface angle and swing path mean.

The clubface angle represents a direction that is perpendicular to the surface of the face. Sounds complicated? The easiest way to visualize this is to stick a tee to the face of the club – as in the below pictures.

The swing path is the directional (left/right) movement of the club through impact. See the below picture for an example of a left swing path. 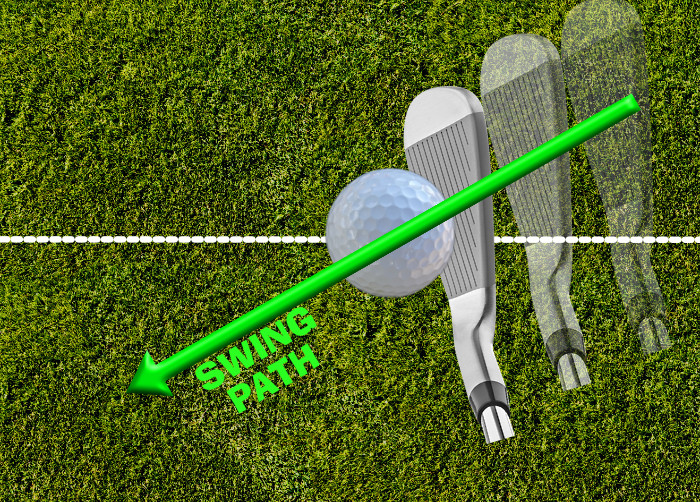 Now that we have the formalities out of the way, let’s dig into which one of these contributes more to whether your ball hits your target or not.

When the path and face are presented in different directions at impact, we get a cutting across action. For example, if (at impact) we were to

Both of the above scenarios produce a glancing blow. This causes the ball to both start offline AND curve. The amount the ball starts offline and curves will vary with many factors – such as the club you are using, whether the ball/face is wet etc.

The below contains a tiny bit of mathematics – but don’t worry. If you’re not a numbers person, it will all be summarized towards the end of the article.

As a general rule of thumb, when the path and face are misaligned by 1 degree

“X” is typically around 1% for a wedge, 2% for a 7 iron, and up to 4% for a driver. To put that into something easily understandable, if you hit your driver 250 yards and present the face just 4 degrees open to the path, that ball can curve 40 yards right. 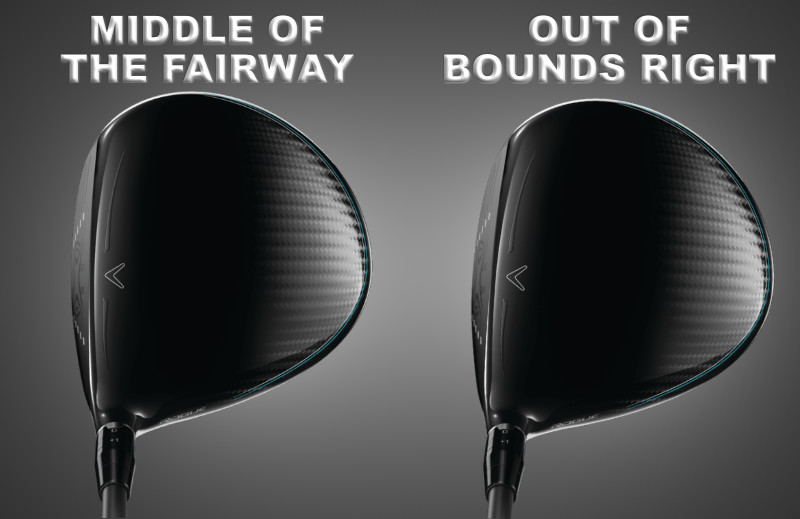 So which one is more important to control?

While the answer to that has multiple variables, let’s look at a couple of examples.

Imagine we are using a swing robot which consistently presents the path and face at 0 degrees (neutral, neither left nor right) at impact. Please note – the below calculations would be very similar regardless of what the robot’s face and path averages are – I used neutral numbers for simplicity. 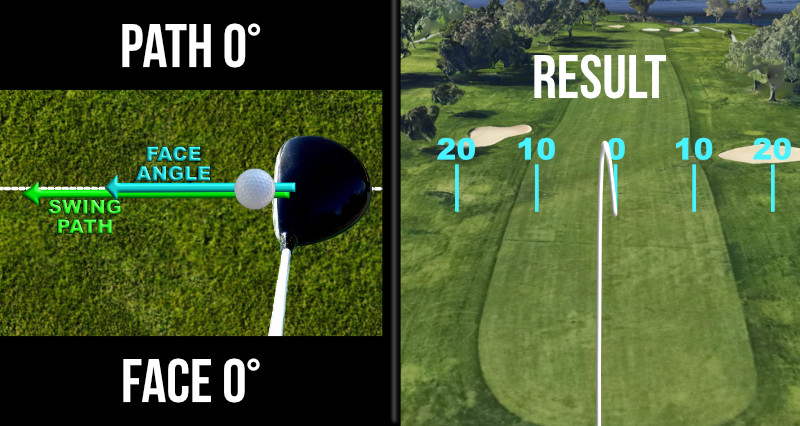 For these examples, this robot is using a driver and hitting the ball 250 yards.

Now we tweak the settings on the robot so that it presents the path just 1 degree left or right of the neutral face.

Using our formula, the ball would;

This means that, for an isolated path change of just 1 degree, the ball went 9 yards offline (10 yards of curve minus the 1 yard starting in the opposing direction). 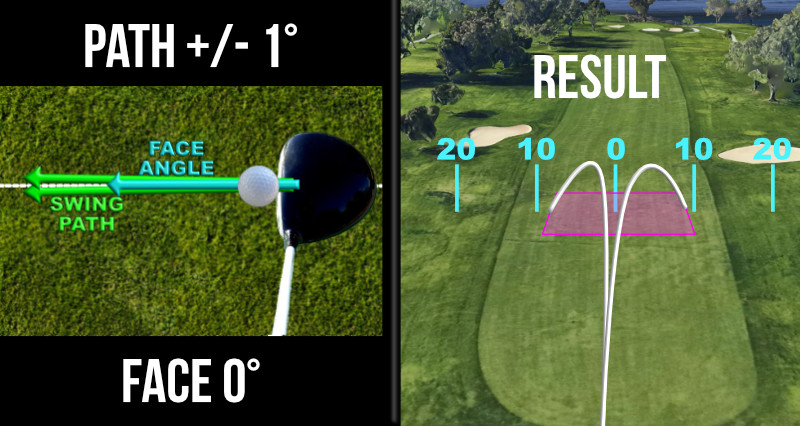 In the above picture, we can see that presenting the face square and a path that is +/-1° produces shots which go 9 yards offline (both left and right). Notice how they both still hit this 25-yard fairway.

Now we tweak the settings on the robot so that the path remains neutral, but the clubface is presented just 1 degree left or right of neutral

Using our formula, the ball would;

This means that, for an isolated face change of just 1 degree, the ball went 13 yards offline

We can see, in the above picture, that if the path stays square but the face is presented 1 degree right/left, the results will be 13 yards right/left. Notice how both drives miss this 25 yard fairway.

4 yards more offline at 250 yards doesn’t sound like much, but that was with only 1 degree of change. Take a look at the table below to see what happens when you present the path or face 2/3/4 degrees offline. 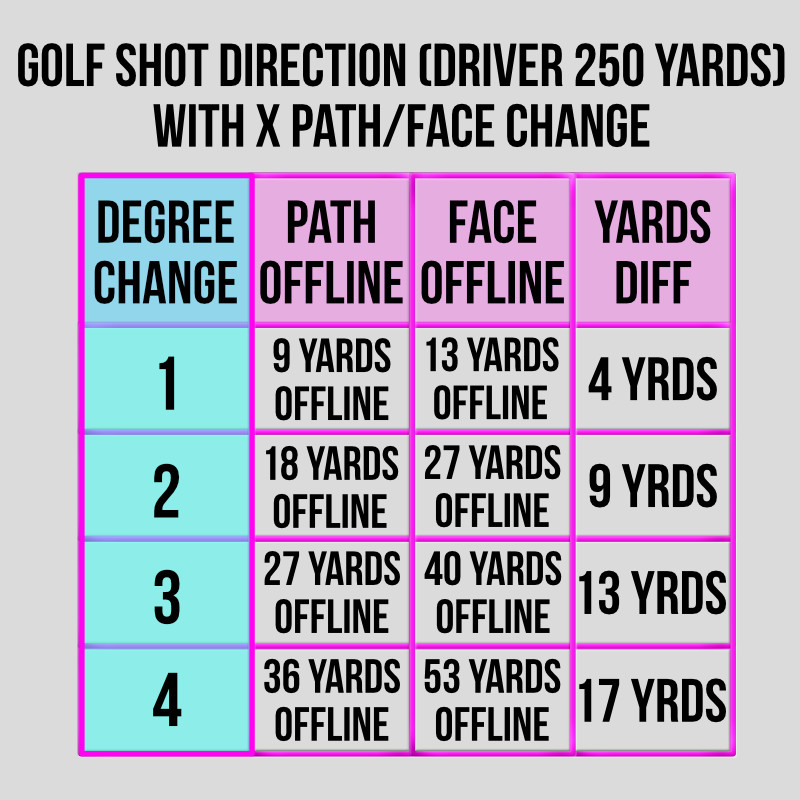 All are bad, but the face changes are significantly (around 50% more) harmful to the end result.

Another point to make (from a coaching perspective) is that, when a player changes their swing path, usually the clubface will shift in the same direction a certain amount.

For example, if I got 100 golfers to make their swing path more to the left, it’s very likely that their face would also move some degree to the left.

This means that a path change may have even less of an effect on the end result.

What This Means For You

It’s very likely that, when you hit an unacceptably offline golf shot, the clubface has been the culprit and has changed outside of your normal parameters.

Also, changing the clubface can have a much more significant effect when it comes to fixing an offline shot. Controlling the face is probably the key skill when it comes to achieving better results.

With that said, if you want to not just control the end result (where the ball finishes) but also control how it gets there (the curvature of the shot), then you would need to make changes to both path and face.

If you want to

Then make sure you check out The Accuracy Plan – click the image link below.

And if you really want to delve deep into this topic, as well as;

And much more – make sure to check out my Next Level Golf Program – click the image link below for more information.