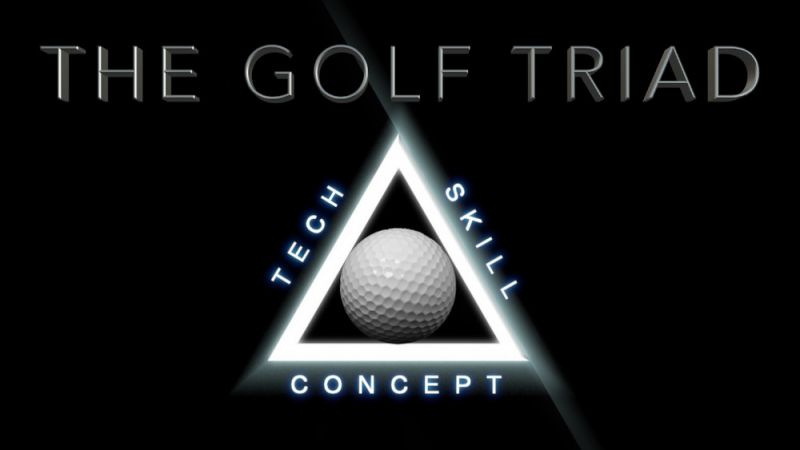 When I am analyzing a golfer, I am constantly working out where they are in terms of three important areas. These areas all feed off each other, and without all components supporting each other the player is unlikely to improve. Knowing and understanding these areas can also help me identify which route I go regarding improving a player.

I call it the Golf Triad

The above three areas are very different, but if you want to be good at golf, you need to get better in each area. Working endlessly on one without the other two factors may lead you down a dead end road, or create less than optimal results.

This is the what to do part, as well as the are you doing it part

Concept relates to your conscious idea about what has to happen to create a good golf shot.

Also lumped into this category is your awareness of whether you are doing it or not. Basically, this is task related – knowing what the task of golf is is vital, and hardly any golfers fully understand the task. But it is key that a golfer knows what it is they are doing at impact to cause their bad shots. Simple questions such as “Where did you hit on the club face that time?”, or “where did your club first contact the ground?” all help me identify how good a player’s concept is.

And the frightening part is, this is the number one issue for most handicap golfers.

This is the how to do it part

Technique is what most people know – it’s the way you move your body/club through space. Technique can be things such as

All the way to more complicated things, such as

This is the stuff that is fed to you every day in magazines, blog posts, TV commentators and articles. It is the thing that I find the majority of golfers working on, and to a certain degree, it can be an important element of your improvement program. 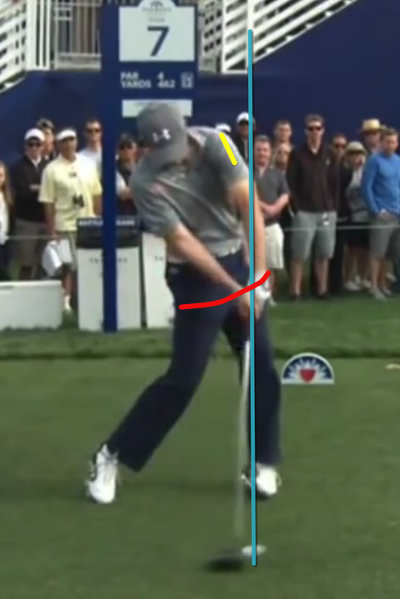 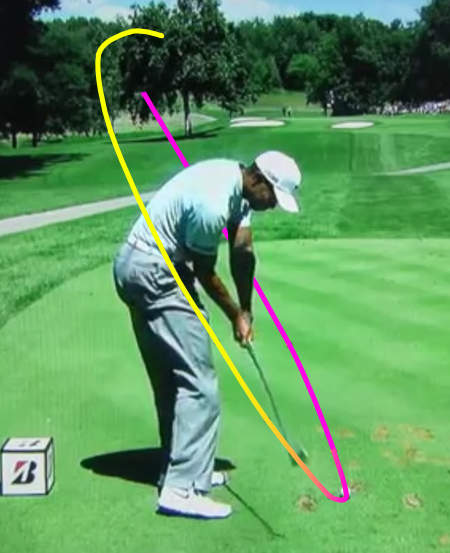 Yes, analyzing and improving your technique can be an important part of the process

However, we also know that there are many ways to get the job done technically – as evidenced by many players on tour with many different swing styles. Also, not everyone will be able to create the same technique – physical limitations will take care of that.

This is the doing it part

Skill is your ability to do what you intend to do. You can measure skill, but you can’t see it. It’s not as tangible as technique. For example, two players may be hitting the sweet spot on their club face, but only one player may have the skill to hit wherever they desire on the club face.

A reversal of that analogy would be two players topping the ball.

Player A is an amateur – they are intending to hit a good quality shot, but they swing too high through impact and their club hits way above the equator.

Player B is Rory Mcilroy. He is playing a trick shot, which is to hit the top of the ball so finely that the ball barely falls off the tee (as shown below)

Even though both players may have produced the same technique of hitting above the equator of the ball, only one player is exhibiting skill.

Skill and technique are not the same

You can even look at Rory McIlroy’s technique in the above video and say that it looks quite good. He exhibits many of the technical traits of great players here – great pressure shifts, great kinematic sequence, a top of the backswing position that most would die for, a full follow through etc.

Yet, through his concept (he is trying to hit the top of the ball here) and his skill (his ability to control the swing arc), he is able to do something incredibly difficult (it is actually harder to top the ball like this than it is to hit a flush shot).

One last example – two players may have the ability to hit the ball to an average of 15ft from the pin from 100 yards. However, both players may have used very different techniques. One player may have a steep backswing, very little hip turn, swing across it with an open face and hit a fade. The other player may have a flatter backswing, more hip turn, swing from the inside with a closed face to path and hit a draw. Techniques are different, but their skill to control the end result is the same. 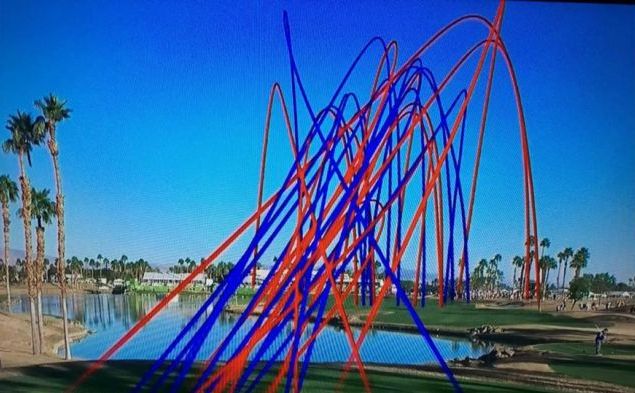 Examples of skills are

They all work together

Technique, concept and skill all work synergistically. They all tie in together; if one thing is missing, the whole system can fail, as explained below.

This is a much rarer case for me to see, but basically a player may be highly co-ordinated, yet be producing a technique which is far less than optimal for what they are trying to achieve.

For example, a player may be great at brushing the grass in the right place (skill), but they are doing so by swinging the club 20 degrees left/right. Or they may have a great ability to hit the sweet spot, but they are currently using a posture which is not great for keeping balance or moving the body effectively. 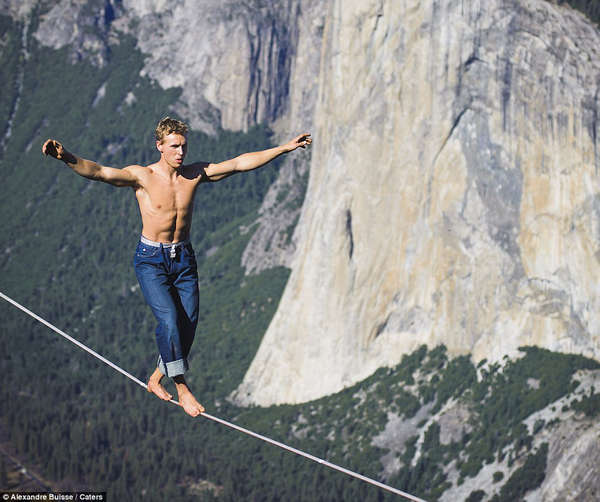 You might have the skill to get across without a balance pole – just as you might be able to hit great shots with a poor technique. But improving your technique can be like adding a balance pole, or making the rope thicker.

How can you be skilled at something if you don’t know what it is you are trying to do, or what is happening?

There certainly are cases of this happening (the difference between procedural and declarative knowledge), but most amateurs are severely held back by their lack of concept. I see players all the time who have great ability, but with shitty concepts stopping them progressing.

For example, a player with great skill who thinks that they should hit the ground behind the ball is just going to be good at hitting behind the ball. Also, if a player has low conceptual awareness (awareness of what happened), they may use their skill to their disadvantage. I have had several players who hit a shank and believe they hit the toe. When they then try to hit more towards the heel (the wrong fix), they hit it worse – obviously. 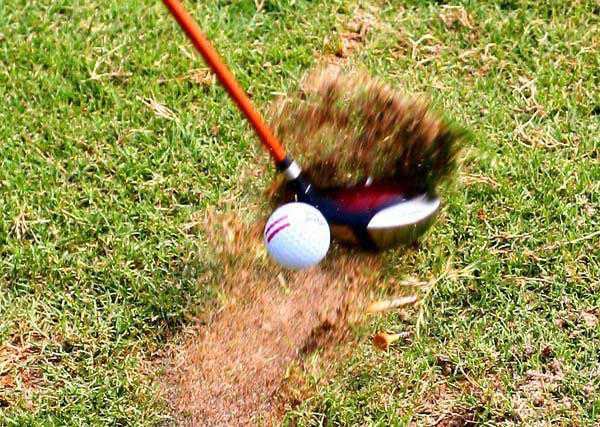 “I’m supposed to smack the ground a foot behind the ball, right?”

Their technique was never the issue – their skill wasn’t the issue either. Their ability to conceptually understand what is happening was the issue.

On the flip side, What if you have the right concept but no skill? This is a bit more common with better players who may understand what it is that creates a good shot, yet are seemingly unable to do it.

For example, a player may be slicing the ball to the right; they understand that the face is too open to the path, but they can’t seem to change it. In this case (if everything technically is there to enable them to be able to change the direction), I will go a skill building route – improving function through certain drills.

Variability drills and differential drills are some of the best skill building drills around. If you want to learn more about these types of drills, check out “The Practice Manual – The Ultimate Guide for Golfers”

Some players may know what it is they are trying to do, but struggle to do it consistently because their technique is holding them back. 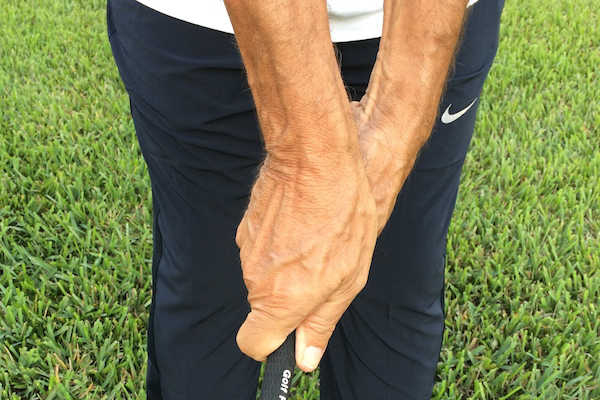 This person might understand that they need to close their clubface more, but this grip technique is not making it easy for them to square it up.

I see this all the time with players who have read a million golf books on swing technique, and they have worked hard at their movement pattern without seeing success.

Basically, if you have a great looking swing but the club face is open, the ball is going right – and if you don’t understand why it is going right you may start to self-organize into less than appropriate movement patterns. I.E you may start swinging more to the left to try and get the ball back online. 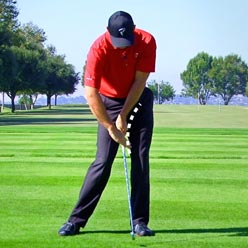 This player may be able to produce the desired technique when a ball is not there, but the moment the ball is in front of them, their old technique rears its ugly head (sound familiar?). You can work on technique all you want, but you’re fighting a conceptual issue. The player may be trying to scoop or get under  the ball.

In this case (as in most cases), your faulty concept is actually harming your technique

I see this a lot in players who are so internally focussed on making the ‘perfect movements’.

Internal focus of attention (movement) and/or too many thoughts can severely hamper our ability to coordinate the whole. This goes into a very deep topic which is beyond the scope of this article, but it is safe to say that you can have a great looking swing yet be poor at co-ordinating the technique into producing the desired outcome (if you even know what that outcome is). 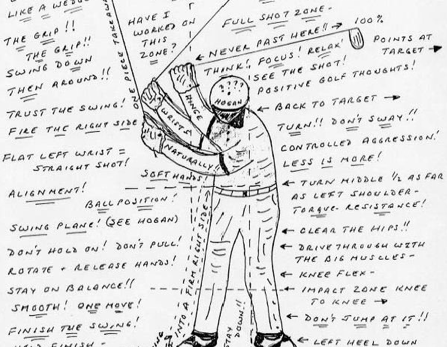 If you have all this going on in your head as you are swinging, you might look great, but your ability to coordinate the system (your body) and all its moving parts is going to be severely hampered.

When I am analyzing a player I am nudging all three areas up increasingly, without leaving one behind.

This is in stark contrast to how most golfers train (or, ashamedly, how most golf teachers teach), harping on endlessly and working on everything pertaining to technique without ever touching skill or conceptual elements. I am glad to say that I now know quite a few more teachers who are taking these above concepts on board and looking at the player as a whole, rather than simply what is on the video screen. 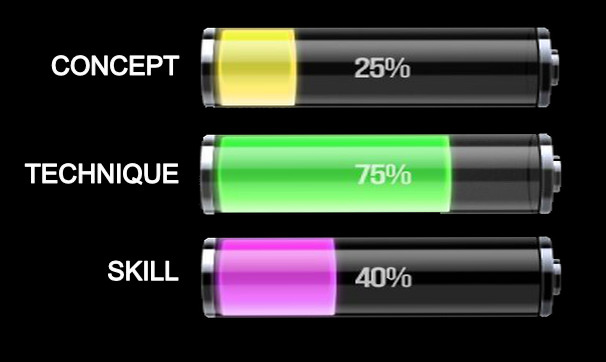 Most golfers just keeping adding more and more to the technique without ever working on their skill levels or understanding of the task. This leaves an imbalance, and can (in some circumstances) cause more harm than good.

For me, Concept is the basis of the Triad – faulty concepts almost always lead to poor skill levels and techniques. So giving my players a better understanding of what the task is (at impact) and awareness as to what they are doing is one of my personal coaching keys.

To learn more about how to improve technique, concepts and skills for golf, check out The Strike Plan. Click the image below for more details.