The Science of Spieth’s Putting The Science of Spieth’s Putting

In 2014, Spieth ranked 20th in stroked gained putting (the best rating of how good a putter is), saving more than 31 shots over 79 rounds compared to other pros. So far this year, he has an even better ‘strokes gained’ score.

Ever notice anything strange about how Spieth putts?

What makes a good putt?

In order to hole a putt, we have to get the right combination of Speed and Start line.

There is more than one way to hole a putt – we can use different variations of speed and start line to get a ball into a hole – we could roll the ball faster and straighter, or play more break with a slower roll of the ball.

The crafty subconscious and the illusion of free will

In Dave Pelz’s book “The Putting Bible”, he explains that amateurs typically play only 1/3rd of the true break. That is to say that on a putt which breaks 3 foot, an amateur would typically only play 1 foot of break. Even pros only played 2/3rd of the break consciously. 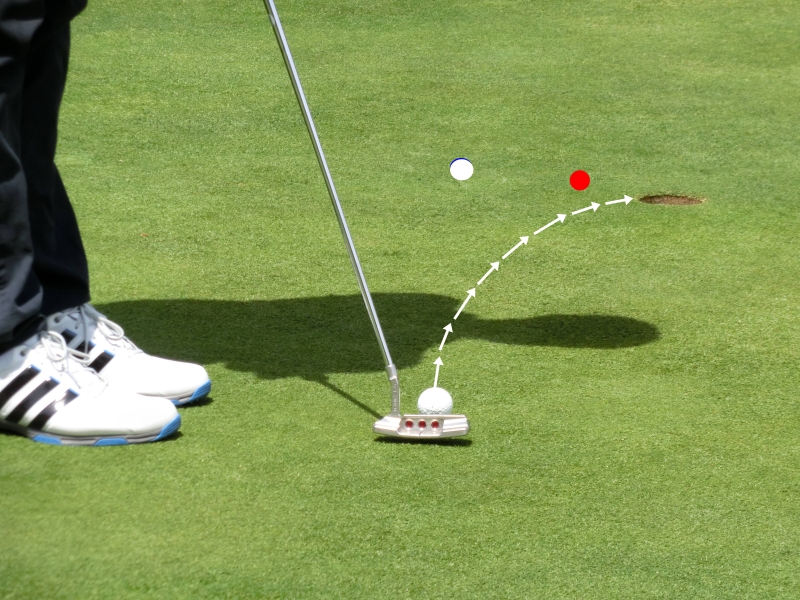 Where most amateurs will aim consciously (red spot), versus where you actually have to start the ball to hole it at a given speed (white spot)

This is why my controversial putting article about how ‘perfecting’ your putting technique will make you a worse putter is true. CLICK HERE to open it in a new tab.

If this is true (amateurs and pros both misreading putts), how on earth can anyone ever hole a putt? Well, just because you ‘believe’ you are playing a foot of break doesn’t mean that is what you will actually do. Our subconscious mind knows better and it can compensate for any inadequacies in your conscious read.

I hate the term compensation – I much prefer the term ‘good variability’.

For example, a pro may set up to play 2 foot of break, then their subconscious mind may kick in and push the stroke a foot further up the slope, and in pops the ball. Without this ‘good variability’, they will miss a lot more putts than they hole.

This discrepancy between what you think you are doing/choose to do and what you are actually doing is a well known and researched phenomenon – calling into question our own ideas about free will.

If Mcilroy’s subconscious mind hadn’t kicked in and pushed this putt, he would never have holed it.

Perception action coupling is simply our perception of everything (from the slope and location of the hole, to the weight of the putter etc) and the action we provide. For example, if you perceive the hole as being farther away, you will provide a greater putter speed to get the ball there.

There are two main types of focus – an internal and an external focus. 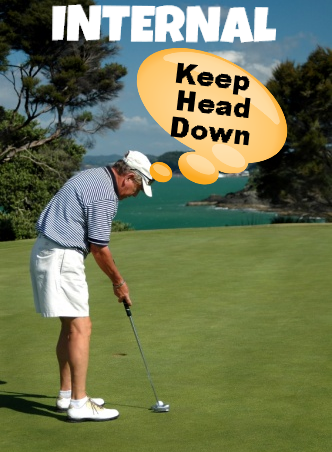 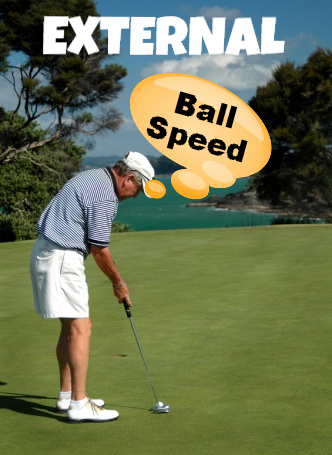 Foremost researcher on the area of focus of attention and how it affects skill acquisition and retention is Gabriele Wulf. In her paper, “A review of 15 years of motor learning an attention research” (3), she concluded that

You are addicted to the internal

In 2013, Land et al (1) studied the effects of attention on putting performance using skilled performers. They split golfers into 3 groups

What they found was a massive improvement in putts holed simply by shifting the attention of a player to an external focus (result).

The control group were given no instructions regarding what to focus on – they performed the worst. The neutral focus group (counting beeps) showed a medium effect – it still beat the control group. 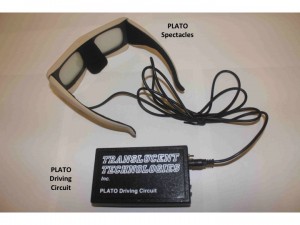 Occlusion glasses can be switched to opaque or transparent

Even more interesting to me was the fact that, even though the control group were given no instructions on what to focus on, they almost exclusively adopted an internal focus (focus on the movement). It seems that we are addicted or conditioned to think about the movement, even though this study showed it is the most detrimental to performance.

Perhaps this is a product of all those magazine articles and tips offering constant internal advice.

Spieth used to suffer with the short putting yips – as a result he decided to adopt this ‘looking at the hole’ technique, and everything improved. In fact, it is known that one of his strengths is putting ability. 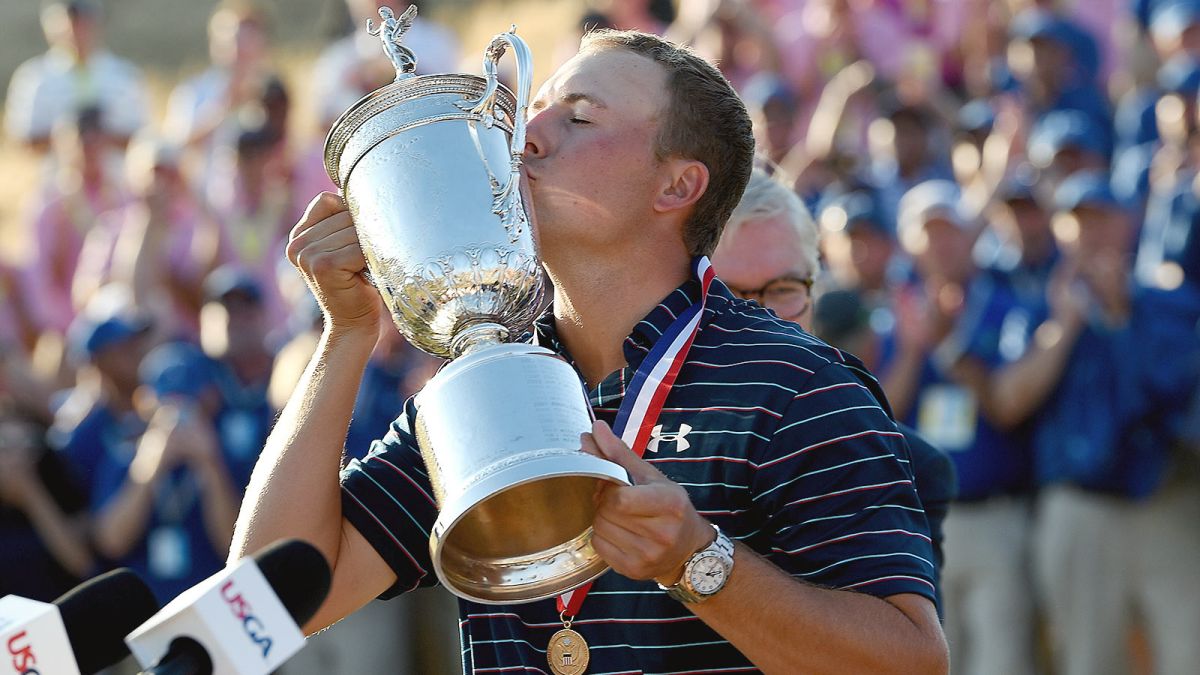 It is very likely that by adopting this technique, he has shifted his attention more towards the target – there are a few potential benefits to this

Is looking at the hole for everyone? No, but it is worth practicing and experiencing.

In fact, if you have the yips, it may provide a cure for it due to the shift in attention – I discussed this with Dr Sasho Mackenzie and he agreed that it could be a potential solution for some people.

Quality of impact as assessed by the variability in face angle, stroke path, and impact spot

In other words, looking at the hole did not negatively affect how they hit the ball.

What do you do? Internal or external

So, what do you do when you putt?

Are your thoughts dominated by internal body cues (keep your head still, swing your arms and shoulders, keep your wrists quiet etc), or are you more result oriented?

While everyone is different and has different needs (which may vary depending upon the stage a golfer is in), the majority of research is pointing towards external foci being more beneficial.

In my book “The Practice Manual – The Ultimate Guide for Golfers” I discuss attention in depth, and how it relates to improving your scores. In the Performance Training chapter, I also discuss simple tests you can use to find out what the best attentional focus is for you, to give you your best performances when you need them.

(To get a copy of the book from amazon, click the link at the end of this post.)

No good blog post would be complete without a Tiger Woods anecdote.

During a clinic with Tiger, he explains that is Father taught him to

This is a really good way to get your attention more external without having to look at the hole during the stroke. Try it yourself, it really works. 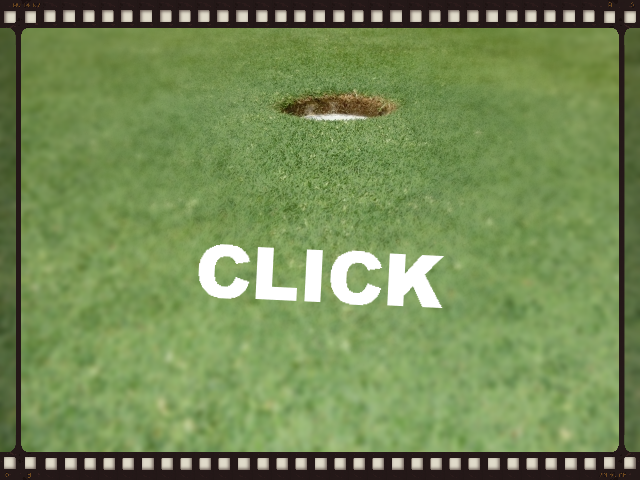 Something I have noticed a lot is that better players tend to spend a massive amount of their routine with their eyes on the hole, whereas most amateurs and poor players I see tend to be looking at the ground as they do their practice swings.

Fairchild, Johnson, Babcock and Pelz also found the same during a small study – better players spend more time looking at the hole during the routine with a steady gaze.

To me, this makes no sense. Why would you be looking at the ground as you are making your practice swing?

The lesson here is this – when making your practice swings, fix your gaze on the hole as you are making the movement. This allows your brain to make the links between the perception of the hole location/break/speed needed and the action provided.

The book is also available at amazon.co.uk, amazon.de, amazon.it, amazon.es, and amazon.fr