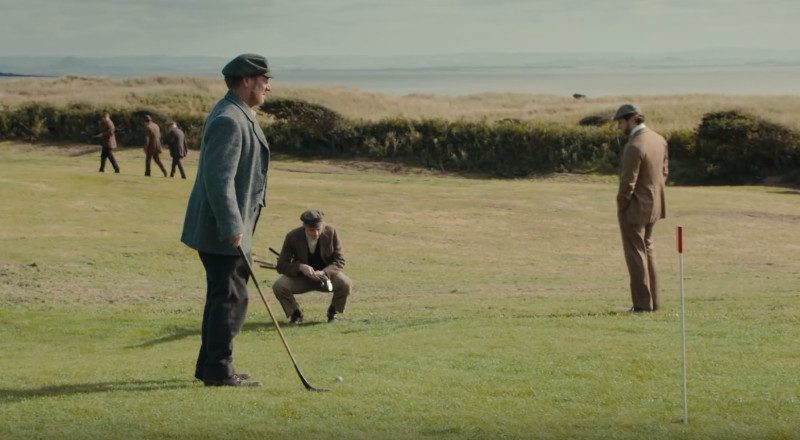 Thanks to Mike Todt from golfassessor.com for writing up this fascinating piece on Hickory Golf.

Maybe I’m just a golfing nerd, with all the documentaries I’ve watched and literature I’ve read, but seeing the film Tommy’s Honour this week was a real treat. If you’re at all interested in the story of Old and/or Young Tom Morris, it’s well worth a watch.

Part of the promotion trail in the build-up to its release was footage from the PGA Tour of Jordan Spieth, fully dressed in tweed suit and bonnet, giving a retro form of the game a whirl: hickory golf.

Evoking shades of Bobby Jones – but playing nothing like the great man – Spieth reportedly struggled in his bid to wield the hickory clubs to good effect; finding the combination of dirt as a tee, the restrictive apparel, and the cumbersome, wood-based weapons a bit too much to cope with.

“This is a handicap all the way around,” he said of the hickories. “It keeps it more compact but you lose a lot of power and control. It’s definitely a challenge.

“I gained just a bit more respect for those guys back in the day to be able to do that.”

But it isn’t actually just a “back in the day” thing. Hickory golf, believe it or not, is on the up and up. The Society of Hickory Golfers and Golf Collectors Society are the leaders of a pack which includes a number of organizations dedicated to hickory golf, and it is believed there are currently around 3,000 active and regular hickory players in the US alone. By all accounts, this number is swelling by the week too.

Yet it isn’t just guys gripping the leather and clunking it around for a laugh. Hickory golf is a competitive business, and is even segregated into two divisions, namely pre-1935 and pre-1900.

The pre-1900 group play with the old Gutta-Percha ball, or similar, and clubs are either produced prior to that date, or are authorized reproductions to fit specifications.

The pre-1935 group, also known as the vintage division, use modern balls, and, as you may have inferred, play with clubs manufactured before 1935, or authorized reproductions thereof.

There are events throughout the year, although in the States, the one to look forward to most is the $5,000 US Hickory Open (USHO). The event has been going for nearly a decade, and last year it was gifted club professional Jeremy Moe who beat Cliff Martin – and 80 other participants – at the challenging Links of Lawsonia in Wisconsin to secure his fourth consecutive title. Impressively, he fired a 36-hole score of 151 to do it.

The 10th edition of the USHO takes place in July at California’s Del Monte Golf Club, and what a spectacle that promises to be. Last year competitors from the ages of 16 to 79 were involved, which shows the broad appeal of the hickory game. Moe will be trying to make it five in a row, although he may also be interested in taking his talents abroad to the World Hickory Open Championship (WHOC), which is played in Scotland every year.

In 2017, the iconic Links of Kilspindie Golf Club – which is just down the road from Muirfield – will be playing host, and the defending champion will be none other than 1988 Masters winner Sandy Lyle. That’s right – hickory golf is snapping up some of the game’s greatest players in history. Other former WHOC champions include Andrew Marshall and Lloyd Saltman, both European Tour players at various points in their careers.

Events are now also taking place in countries like Sweden, Switzerland, Germany, Australia, France and Finland too, and one can’t help but wonder whether, at a time where golf is becoming increasingly inaccessible to the masses, a venture back into the annals of history may well yet provide a new avenue for prosperity?

Why not, I would say. Golf is a game which values tradition and history more than any other, so embracing the resurgence of hickory golf is a no brainer. Obviously a few thousand participants does not mean the tectonic plates are about to shift. But hickory and the mainstream version of the game need not be mutually exclusive either, as Lyle and Co have showed.

Bear in mind, films like Tommy’s Honour won’t only be watched by golfers, and when more and more people find out that hickory golf is a real-life activity, with an entry-level cost that is a fraction of its better-known younger brother, there’s no reason participation levels can’t increase.

All I know is that after re-living the tale of Old and Young Tom, and seeing Spieth trying his hand at it too, I’m keen to don the suit and give hickory a go. I’ll bet good money I’m not the only one.