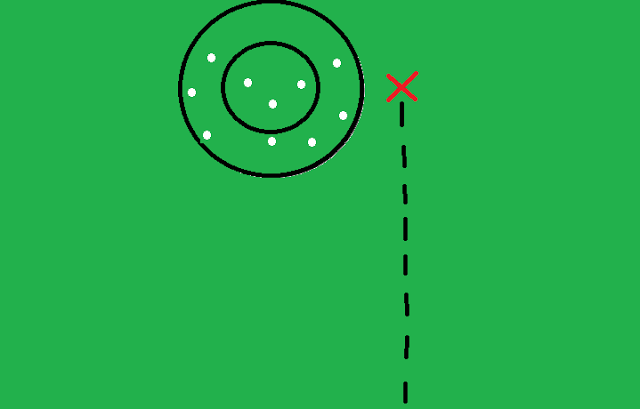 November 13, 2012 12:29 pm Byadmin InUncategorized
3
Last article, we looked at where our target should be in a
specific example. Now, we will look at where we should aim; there is a big
difference between the two. Our target is where we want the ball to FINISH. Our
aim is where we need to align in order to get the ball to our target.
It would be amazing if our swings were so efficient that we
were like guns, hitting the ball wherever we lined our bodies up to. But not
only is this an un-achievable task in reality (although plenty of people still
try to achieve it), but it is not necessary in order to play good golf. Far
more important than hitting the ball as straight as an arrow, is the ability to
repeat what you do, EVEN IF IT IS A MISTAKE.
Let me elaborate. In the early part of my golfing career, I
hit about a 20 yard draw shot with a typical 6 iron. The ball would start about
5 yards right and then curl 20 yards, finishing 15 yards left of where I aimed
on average. So it looked something like below;

The red cross being where I am aiming, the dotted line being
the line from my ball to the target. The white dots are where my golf balls
would finish (between 5 yards and 25 yards left), and the circle around them
represents the shot pattern.
Obviously, not hitting where I was aiming can be seen as a
fault. But if we are intelligent enough, we can make our faults work for us.
Below is a picture of where I would aim (the red cross).

This would allow me to get my shots to land within my shot
circle, which is positioned in a safe place on the green (as discussed last time). So I would almost ALWAYS aim about 15 yards to the right of where I
wanted my ball to finish, as my pattern was to hit 15 yards left of where I
aimed. Make sense?

So we have looked at picking an acceptable target last week
(which may not be the Flag), we have looked at adjusting where we aim to allow
for our shot pattern. There are other things we may have to take into account.
The first thing which springs to mind is the wind.
Obviously, the wind will blow your ball around in the air
and change the direction of the flight of your ball. If the wind is moving
left, you are going to have to aim further right to compensate. How much
further right? This is where experience comes in to try and judge the effect
the wind is going to have on your ball. It is such an individual thing, because
different people hit the ball different heights and distances and shapes. It
would be too general to say that a 10mph wind will move your ball 10 yards.
We shall now look at our above example, but add in a right
to left wind. The wind is strong enough to move the ball 10 yards to the left,
so this means I have to shift my red cross (my aim) 10 yards more to the right.
If the wind is gusting, it may be beneficial to add a ‘fudge factor’ in and aim
a further 5 yards right, just in case an unexpected gust happens after the ball
has been struck (it is better to be safe than sorry, especially when the
alternative is a water ball which was out of your control).

So now have a look at the example. You can see that my aim
is not even on the green. I have picked a target which is maybe 7 yards right of the
flag, due to the danger to the left of the flag. I then aim a further 15 yards
right to allow for my normal shot pattern, and add another 10 yards for  the wind, finally dropping another 5 yards as
an assurance against gusts. This puts me aiming a whopping 37 yards right of
the pin – aiming in the trees.
This is a relatively extreme example, where there is danger
on the left, a player with a predominant mistake of being 15 yards left, and a
wind pushing the ball further left. All these factors require a lot of
compensations. But the player who is unwilling to change their strategy will
end up in the water more often than not. It may not be ideal to aim into trouble, but you have to play your golf based on where your ball finishes normally, rather than on what route it takes. For example, When I played this big draw shape, I could hit 100 balls and only have maybe 2-3% finish to the right of my target. So, for me, it was easy to aim at trouble on the right, as I knew it would be coming back 98% of the time. If it didn’t, I could deal with that 2-3% mistake.
Even if I were to aim 37 yards right like this, then happen
to hit one of my straighter shots and the wind dies down to a breeze, I should
still hit the right side of the green. At worst I will be left with a shot from
the safe side of the green where we have lots of green to work with, so I could
hit an easy low running chip shot.

Where do I look – visual aim

You may read in magazines not to compensate for a hook or a
slice by aiming further right or left. Whilst there is an element of truth to
this (in the long run, you should look to minimise what is causing the hook or
slice), course management deals with creating a strategy which fits your
current game. In truth, every top professional golfer plays some level of
shape. Rory Mcilroy plays a rather large draw shot, Jack Nicklaus was known for
fading the majority of his shots. Therefore, the best players all compensate by
aiming away from their target to some level. This is not a mistake, as it is sometimes
seen, but a necessary prerequisite to good golf.
The biggest change you are going to have to make with this
is your visual alignment. When you aim 40 yards right of the flag, as in our
example, you should be visually looking 40 yards right of the flag. This sends
the message to your brain that this is your target. From there, your normal
pattern, plus the wind, will bring it back to your actual target.
If you were to make the mistake of aiming physically 40
yards to the right, but then directed your gaze towards the flag, your brain
may sense that it needs to hit towards the flag, resulting in a big pull/hook
which drops in the water.

After you have identified your target, you need to work out
how to get your ball there. Take into account your normal shot pattern, the wind
and even other factors, such as the lie of the ground. Compensate for these by
both physically and visually/mentally aiming to a place which would allow you
to hit your target.