Why Your New Golf Clubs Won’t (Necessarily) Make You Better 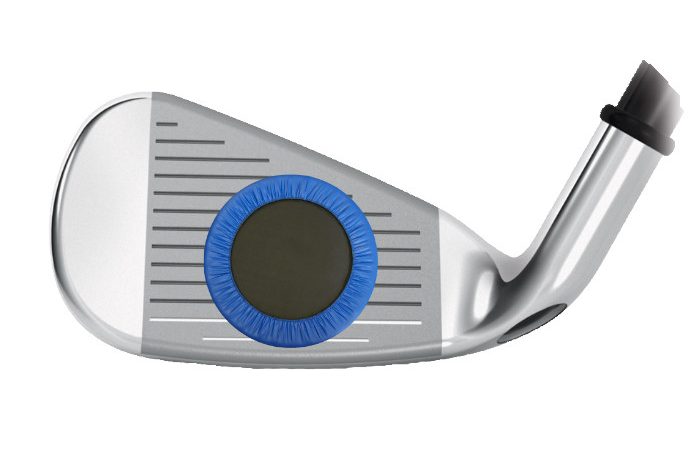 Why Your New Golf Clubs Won’t (Necessarily) Make You Better

Modern irons hit the ball farther – that is true. But why?

A look at a recent 5 iron showed a loft of just 21 degrees. Combine this with a longer shaft length and that 5 iron you are holding is very likely just a 3 iron with a different number at the bottom. 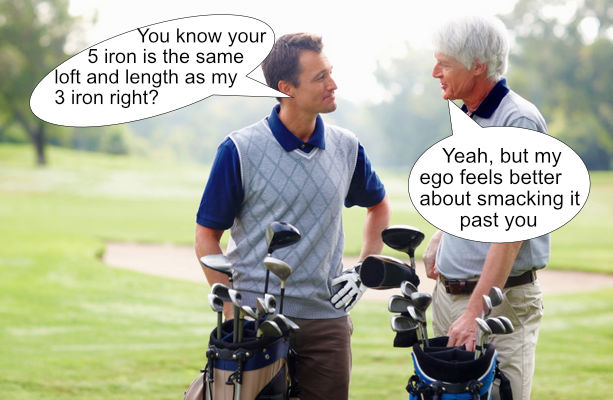 Manufacturers have figured out how to get the center of gravity of the club much lower, resulting in a higher ball flights. This allows them to then deloft the clubs and still achieve the same peak height.

High launch and lower spin = crazy distance. (Find out more about that by reading THIS)

Also, face materials are springier, increasing something called coefficient of restitution (COR) – basically a measure of how fast the ball comes off the face.

Sure, we can also duff it completely, but for most golfers who have been playing many years, most of their shots will fall into one of the above 3 categories.

Imagine you are faced with the following scenario on the course. 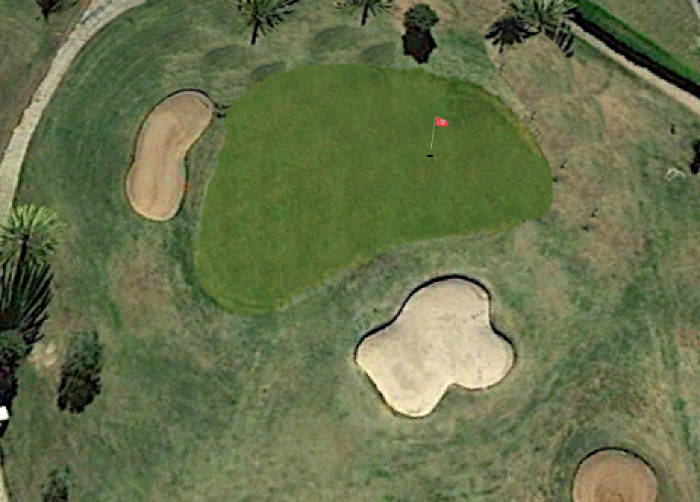 Now, let’s look at an overlay of their shot pattern 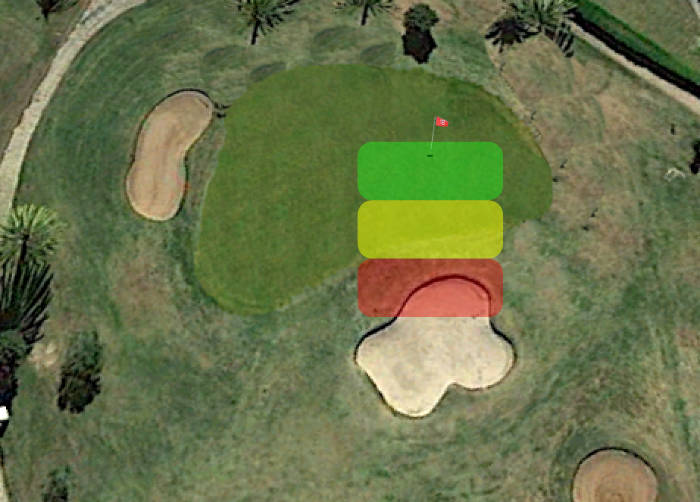 As we can see, when they flush it, they land in the green zone and have their birdie putts. The average strikes land in the yellow zone, and the slightly bigger miss-hits land in the red zone.

With The New Clubs

Now that the player is blasting it 20 yards farther with their new irons, they come to the same hole as before – 150 yards to the pin. This time, they use their 8 iron instead of their 6 iron.

Let’s have a look at their shot patterns.

That’s right – the player will get some flushed shots which land in the green zone, a lot of average shots landing in the yellow zone, and some slightly bigger miss-hits landing in the red zone.

The pattern is essentially the same, even if they used an 8 iron to get there instead of a 6 iron.

Great question – you caught me out, didn’t you……

While it is true that modern clubs have a higher resistance to twisting (moment of inertia) and larger sweet spots (resulting in more consistent distances on heel and toe hits), the clubs can’t offer any more forgiveness on a ground contact error.

What Is The COR Of Mud?

We have said that one of the reasons modern irons go so far is that they have a higher COR. 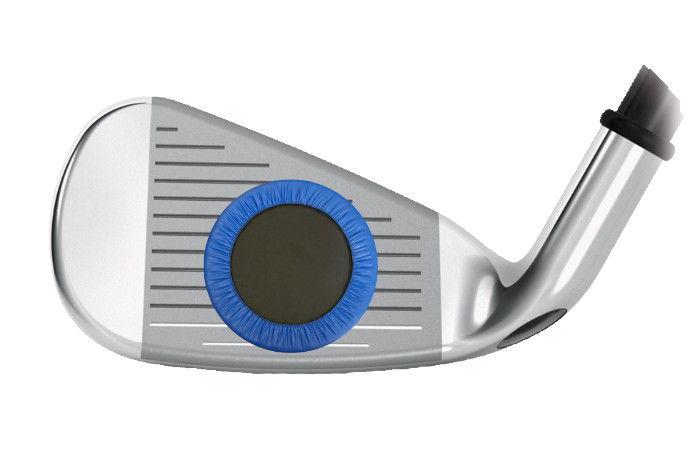 Look at my new trampoline-effect irons

However, strike the ground early and you will get grass and mud trapped between the ball and the face. This means that the COR of the clubface becomes less relevant, and the smash factor of both the old and the new club will drop down to something more similar.

In this regard, a newer club could potentially cause greater distance dispersion between a flushed shot and a slightly heavy shot – which could wash out any potential advantage gained from having a larger sweet spot.

Also, it is my experience that a player often creates more mistakes with ground contact than face contact.

On top of this, when a player says “I have picked up 2 clubs of distance”, it is much more likely that they have only picked up one.

Humans are known for embellishing, and we can even lie so well that we can fool ourselves. We will often compare our new clubs’ flushed shots to our old clubs’ average shots, creating a distorted view of how much distance we have actually gained. 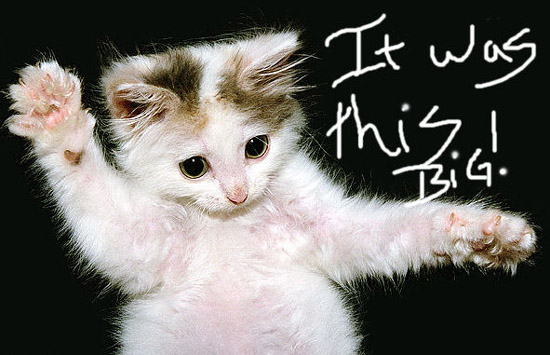 We are all prone to exaggeration

This factor alone can wash out the forgiveness created by the modern clubs.

It is my experience that players with new clubs will also have a greater tendency to play a strategy based around their flushed shots more than their average shot, just because they want to prove to themselves how far these new babies will go.

A phenomenon I have also seen first hand in lessons is that, when you give a player a bigger headed / more forgiving club, their strike patterns start to spread out and become less consistent.

There could be a couple of reasons for this.

As an analogy for the second point, if we told a person to hammer a nail with a very small headed hammer, they would likely constrain the action and produce a tighter spread, even if they miss the nail more often. However, give them a nail and ask them to hammer it with a frying pan, they might make a wilder, less constrained motion. They might hit the nail more often, but the centre of gravity of the nail and frying pan would have a bigger dispersion. 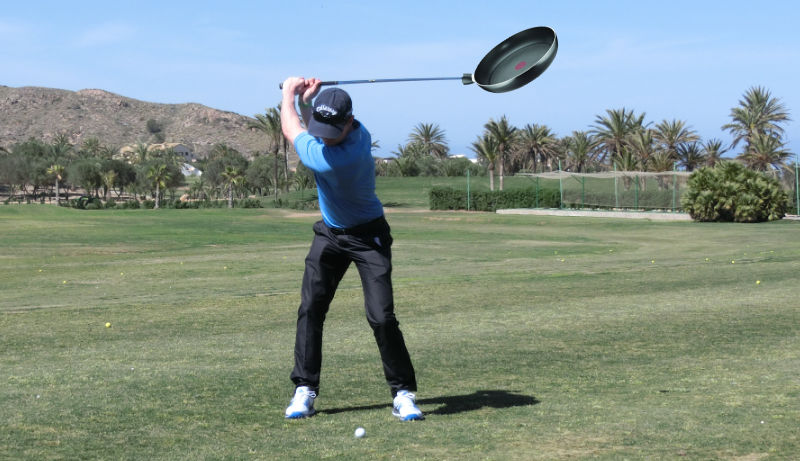 There are certainly course-management strategies that can make the above shot patterns perform/score better. While I would always recommend using improved strategy, we can also reduce distance dispersion through better strike quality.

By improving face contact and (specifically in this case) ground contact, we can reduce the distance between our flushed shots, average shots and slightly miss-hit shots. If you want to find out how to do this, check out The Strike Plan by clicking the link or the image below.

This is an important point which I have waited to make until the end – because I want to clarify my message.

I am not saying new clubs wont make you better – far from it. Modern clubs are longer, straighter and have less of a drop off in distance on off-centre hits. More importantly, getting your clubs fit for you can be a huge benefit to you.

New clubs are also more fun – it is nice hitting the ball so far and having to be less precise with our face strike in order to do so.

You might not get as much benefit from that extra distance as you should be getting. Just something to think about.

Get new clubs – but make sure you still work on strike quality and strategy to maximize the effectiveness of those new toys.

If you are interested in taking your game to the next level, pick up a copy of the book that has been a best-seller in the USA, UK, Canada, Germany and France, as well as reaching the top 10 in Spain and Italy. The book was featured on The Golf Channel as one of the “must have” golf books.