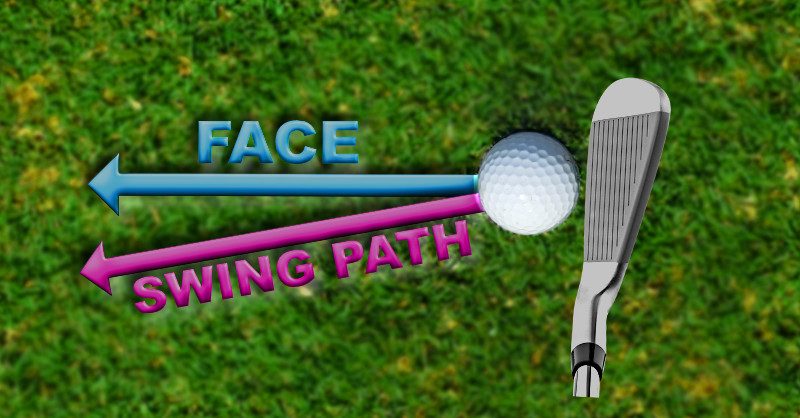 Still, to this day, even with all the information out there, golfers don’t understand the basics of why their ball slices or hooks.

I can’t have that – not for my followers.

So, this article will explore this very topic. It is my duty to have you leave this article with a full understanding of what creates that unwanted banana ball.

This is an in-depth article – bookmark it to come back to it – but you will be highly rewarded by going through and understanding it completely.

I also have a nice little summary at the bottom to make for a good reference.

We have two main influencing factors in the direction of a golf shot.

Let’s take a look at each

Where the clubface points at impact is a hugely influential factor regarding the starting direction of the golf ball. 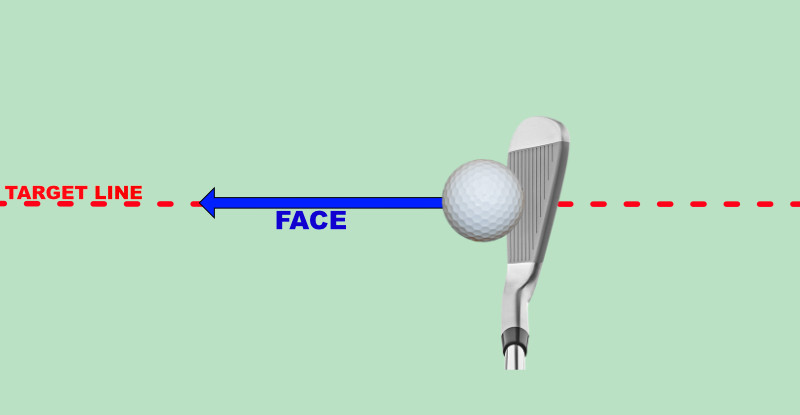 If we were to return the clubface more open (right) or closed (left), the ball would start more right or left accordingly. 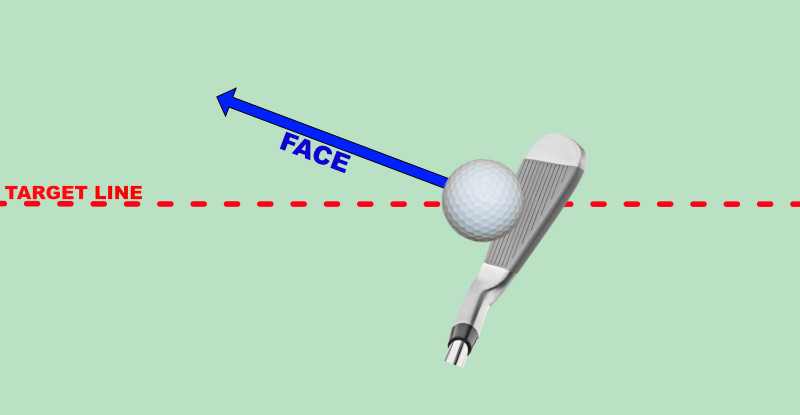 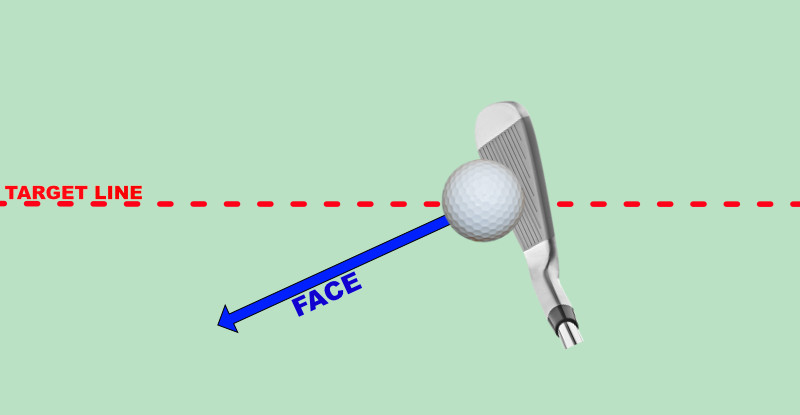 While it is easy to think of the clubface direction as perpendicular to the grooves on the face, this is only a general guide.

Due to the three-dimensional nature of the clubface, the loft and lie angle of the club also has to be factored in. For example, if the club is returned

if everything else is the same.

As examples, below, we see a clubface where the grooves on the clubface are perpendicular to our target but the club is either more upright or flatter. I have used a lie-angle tool to visually explain this effect.

This is one of the reasons why having your clubs fit for you is important.

There are lots of myths about swing path. Let’s get two things straight

Even with a steep (left) or shallow (right) backswing or downswing, you can create different swing paths to what you would imagine.

Both backswing and swing plane might have an influence on the swing path, but it is important to recognise that they are not the same animals.

The swing path is, put simply,

The direction the club face is moving as it is in contact with the ball. 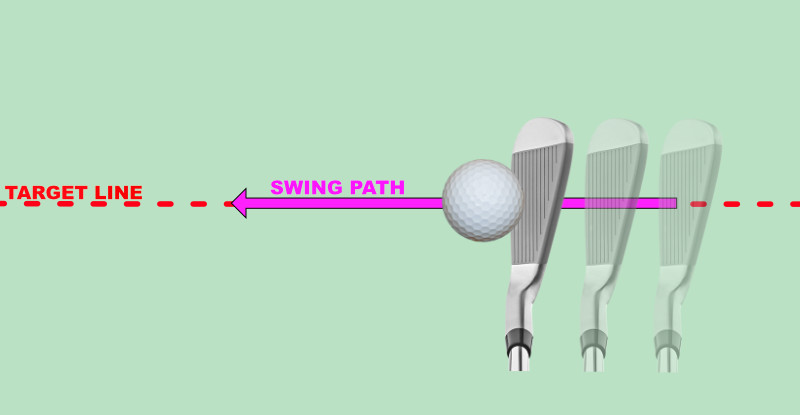 The above picture shows a neutral or square swing path – this is where the clubhead is moving toward the target as it is in contact with the ball. 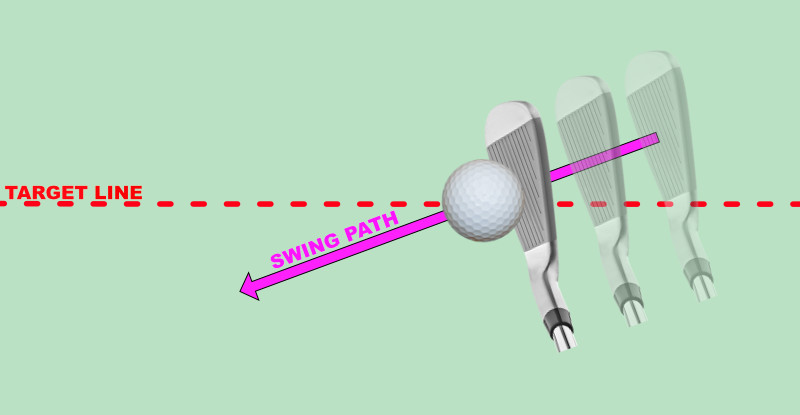 The above picture shows a left (out to in) swing path where the clubhead is travelling more to the left of the target as it is in contact with the ball. 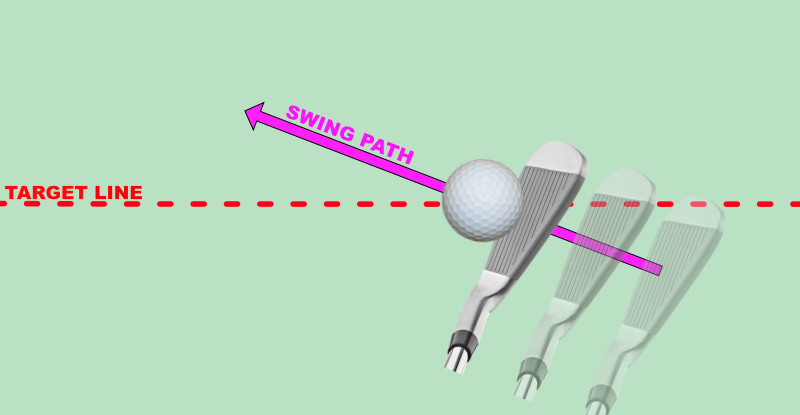 The above picture shows an in to out swing path, where the club is travelling more to the right of the target as it is in contact with the ball.

The Fight For Flight

Path and face both have an influence on the direction the golf ball starts.

Hitting a perfectly straight shot simply requires that both the clubface and swing path line up to the target. 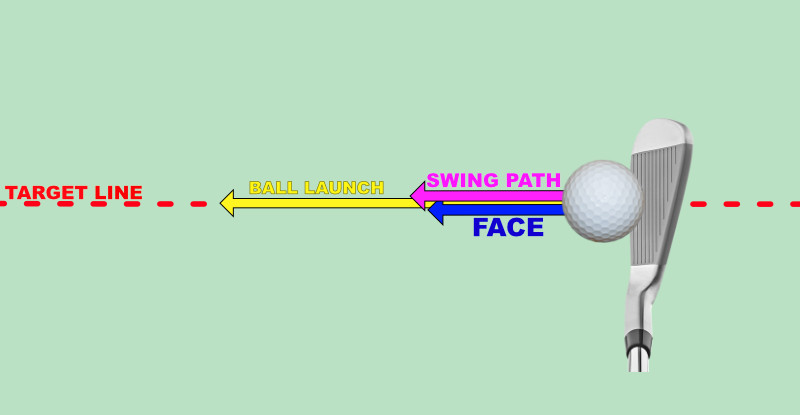 In the above example, the path and face line up towards the target. Below shows the resulting ball flight (red line).

The clubface is the dominant factor in determining start direction. In fact, when the path and face are pointing in different directions, the ball will typically start 75% towards the clubface.

As a simple example below, the swing path is 0 (neutral) and the clubface is pointing 10 degrees right. The ball will therefore start around 7.5 degrees to the right of the target. 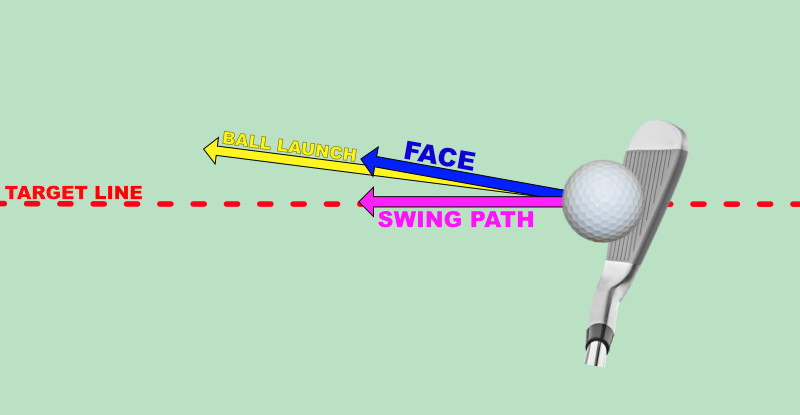 Due to the large influence the clubface has on the starting direction of the ball, we can often see a ball start to the right even if we have swung the club path to the left (or the reverse).

Below shows an example of a 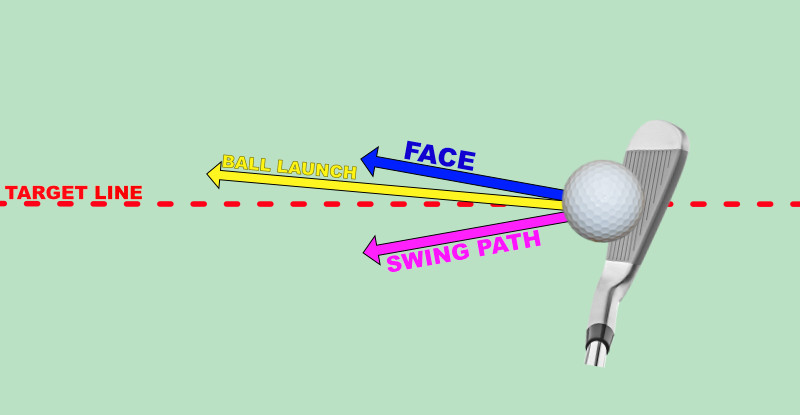 In this scenario, the ball will start about 5 degrees right of target. This confuses the golfer as the ball starts right, so they often assume that they must have swung the club to the right. I see this mistake with a lot of golfers.

While the starting direction of the ball is almost always face dominated, this ratio of path-to-face influence varies.

General rule – Ball starts where the face is pointed.

More accurate rule – ball starts between the face and the path, but always closer to the face. The ratio depends on loft, friction and a few other factors.

When the path and face are perfectly aligned, we get a ball which flies with no curvature. For example 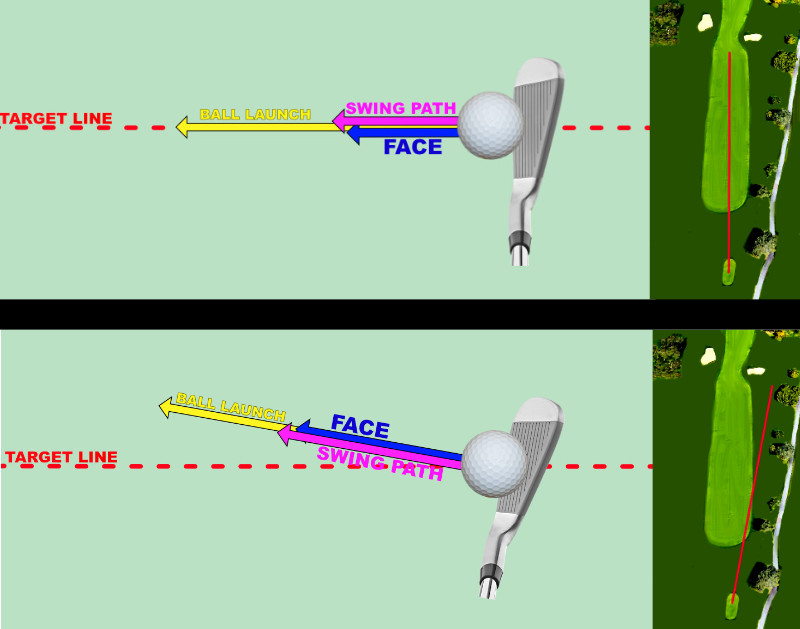 However, when the swing path and clubface are not aligned, this imparts a spin on the ball – think of it like the clubface rubbing across the ball creating a side-spin.

NOTE – the more accurate statement is that a misaligned path and face tilts the spin axis of the ball, but I find most golfers can more easily visualize it as “side-spin”.

This side-spin (or tilting of the spin axis) causes the ball to curve left or right in the air.

If the clubface is open to (more right of) the path, the ball will curve right.

If the clubface is closed to (more left of) the path, the ball will curve left. 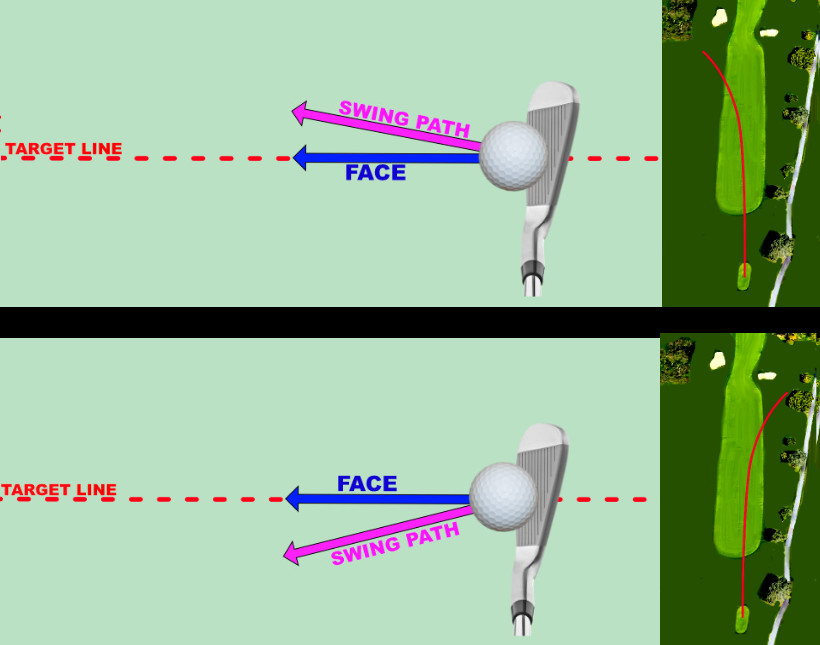 The white shaded area represents the difference between path and face. The bigger this area, the more the spin axis gets tilted and the more curvature is created (up to a point).

Putting It All Together

My advice – read this below quote, write it down, stick it to your fridge door, look at it every morning until you understand it. Why? Because, when tested, 99% of golfers don’t understand it and thus have a hell of a time fixing their ball flight.

However, I have found that a more teachable and simpler to understand version of the above (same thing, different words) is the following 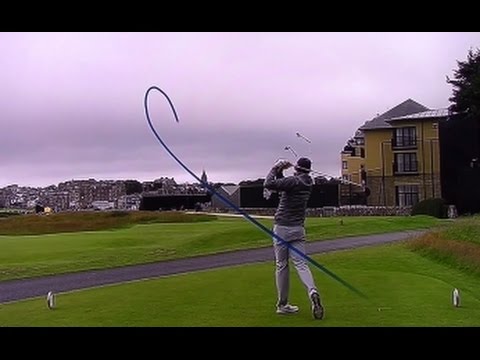 While many golfers work to minimize their shot curvature and get closer to the theoretical ideal of a square path and face (thus straight shot onto the target), the key skill to be a good golfer is simply to manage your curvature/shot shape.

There is absolutely no shame in hitting a shot which curves in the air and lands on your target. Most of the World’s best do it – and some of them curve it quite significantly.

So, how do we manage our curvature?

In the below example, the club is swinging on a 10 degree left path (left of the target, or out to in). This is a typical slicer’s/fader’s swing path. 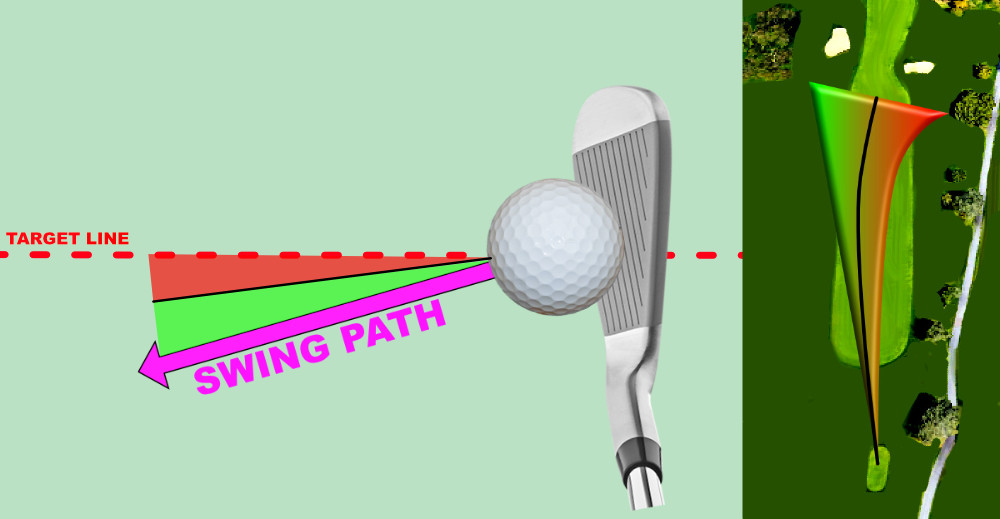 With a 7 iron, the black line represents where the club face should point (roughly) to produce a shot which curves right but lands on the target (a fade).

Good faders of the ball have figured out how to keep the clubface close to the black line more often.

We can easily reverse the above for the drawer of the golf ball. 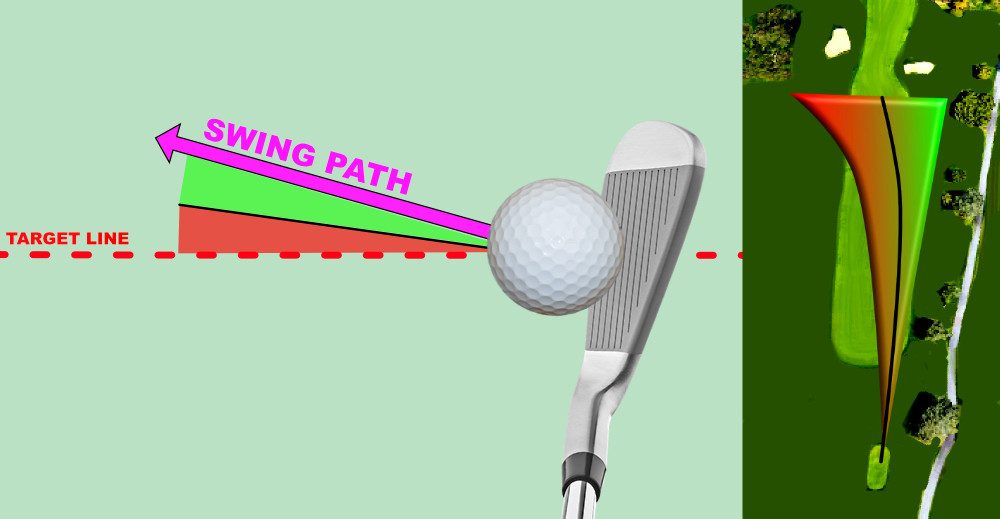 When the path of the club is 10 degrees right, the player will need the clubface of a 7 iron to point roughly toward the black line (5 degrees right) to produce a nice amount of draw (left curve) onto the target.

Essentially, with an in-to-out path,

Why Not Fix The Path?

why don’t we just fix the swing path?”.

While this is a viable option, the best players in the World have all managed to learn how to manage the clubface and make any given swing path work.

Players like Hogan, Nicklaus, Bubba Watson, Dustin Johnson etc. have learned to take their left (out to in) swing path and manage the clubface to produce fades onto the target more often.

Players like Tiger Woods, Rory, McIlroy, Jordan Spieth etc. all learned to take their in-to-out swing path and manage their clubfaces to produce draws onto the target more often.

We also have to remember that path and face are intertwined. If a slicer tries to swing the club more to the right (in-to-out), they will often present the clubface even more open, turning their shot into a push slice.

It has been my experience, through thousands of hours of coaching, that a better option for most golfers is to learn to manage their clubface.

Even if a player were to get the theoretical ideal of a neutral (or more neutral) club path, they would still have to manage the clubface, as a neutral path with an open/closed face still sends the ball right/left and curving away from the target. 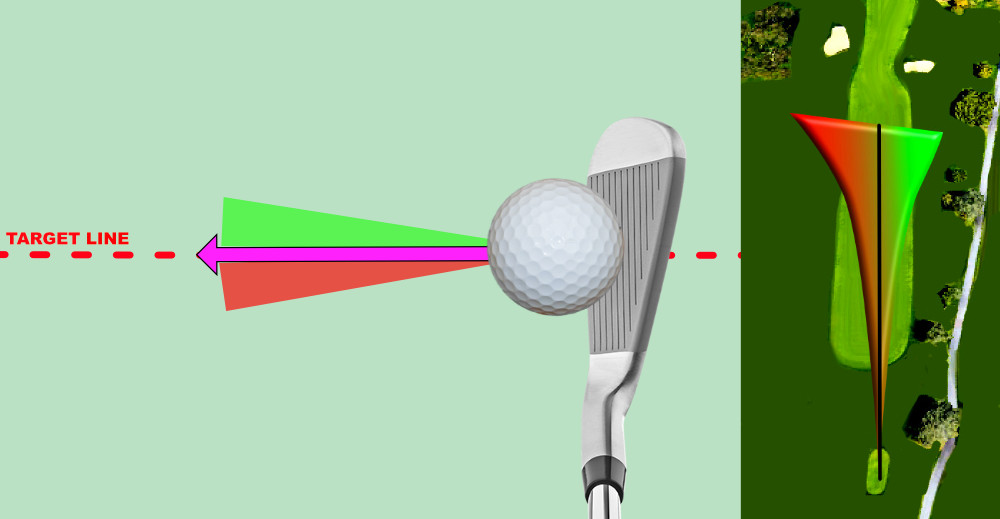 In the above example, even with a square path, if the face is left open to it (green) or closed to it (red), the ball will push-slice or pull-hook accordingly.

In my opinion, clubface control is king.

When Would I Change Path?

There are times when I will change a player’s swing path;

As a coach, I have many ways to get a player to change their path should we desire that. I also have ways of doing both simultaneously.

I discuss the concepts of path and face control in The Practice Manual, as well as suggestions for how to train to improve control over these factors using protocols such as differential and variability practice.

The book has been a best-seller on amazon in 5 different countries for over 2 years now, and was featured on The Golf Channel as a “must-have” book. Click the image above to learn more.

Face and path will act reasonably predictably on a sweet spot strike. However, when we introduce off-center hits, the game changes.

Due to gear effect (see link at the bottom of this article), an off-center hit can cause the ball to react much more unpredictably, with

than the same path-face combination and a sweet-spot strike. This effect is even more pronounced in bigger headed clubs, such as our driver – one of the reasons many golfers suffer with driver consistency.

This is why I created The Strike Plan – the most comprehensive look at improving your strike quality.

Not only does it help you improve your sweet-spot strike (thus increasing distance and minimizing inconsistency), but it also helps you improve your ground contact – the biggest key for hitting more greens in regulation and striking the ball crisply, like a pro.

Learn more about the program by clicking the image link below.

Gear Effect – why does missing the sweet spot cause a slice/hook?

Low Point – The key to striking the ball like a pro